UGH I'm freaking sick. How can I have a cold when it's 100 degrees outside at 8:00 in the morning??? Dang kids! Just took a shot of Robitussin, hopefully it helps me to stop coughing my lungs up.

So yesterday was the LAST softball game!! Melissa had a 1:00 game which meant that we got to go sit out in the heat, yeahhhhh. Scott's parents actually got there before we did because I drug my feet so long getting ready. I really didn't want to go out and sit in the hot sun after getting heat stroke on Friday. We got there about 10 minutes before the game started. Luckily I had my handy dandy umbrella to sit under so I did ok. I think their team won too lol. Afterwards they had a big water balloon fight but I was too lazy to walk across the field to where they had it. 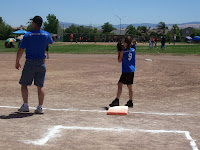 After the game we came home for a little while before going back to town for the pizza party. Scott was one of the coaches so he got a gift. He got a $10 Starbucks card which he made sure to put in his wallet so I wouldn't swipe, and a t shirt. 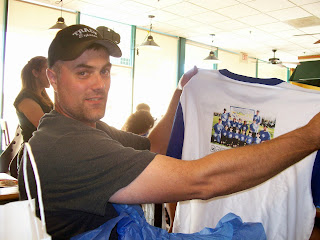 I doubt he will ever wear the shirt but it was a nice gesture lol.

Trevor was being a little shit the whole time they were trying to talk. God he was so embarrassing! Why does it always have to be MY kid that acts like that?? It's not like you can do anything to discipline them while everyone is giving speeches. 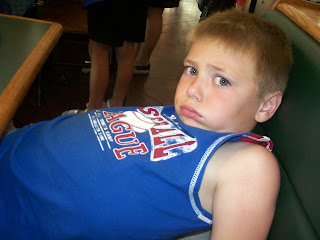 Here is Melissa with her trophy, it's cool, since you can put one of the game balls in the glove. 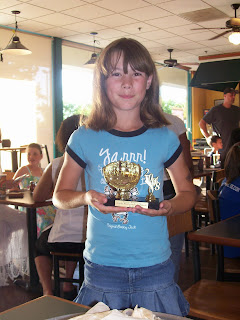 After the pizza place we took Melissa and Trevor to Grandma and Grandpa's house so I could have a break before I tied him in a little knot... and took Jessica to her friend's house so she could spend the night. We went to the movies and saw What Happens In Vegas. It was pretty good.

We got home pretty late but I couldn't go to sleep so I stayed up for a little while reading my book. If you haven't been to Pasta Queen's blog you should go check it out. She is so inspirational and her pictures you can spin around are really cool!Pin It
Posted by Julie H at 7:37 AM

Oh come on, it has got to feel better to have a cold where you live than where I live. It is forty two degrees out and they started adding the wind chill factor back in again ;)

The hot temps are probably why you are sick. Going from AC to Heat will get you every time! I'll bet you are glad baseball season is over! Hope you feel better soon.