So today I got the rest of my Christmas stuff put out! Found some more oranaments in random boxes and added them to the tree. It's looking really full now. 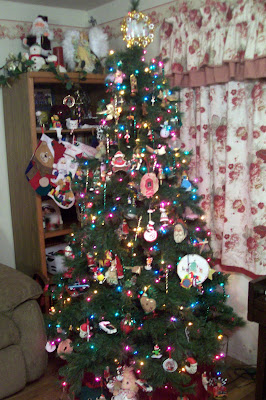 Some people have pretty themed trees, we have 90's kid deco! When we first got married we went to Pic N Save and bought ornaments. Funny we still have most of the ones we bought there. Then we went through the Hallmark phase until we got too poor to buy them there anymore. Most of the tree is covered in Jessica's ornaments from there. Melissa has some and poor Trevor has 2!

When the kids move out maybe we'll have a "theme" tree, although I do kind of like our kid's stuff tree. It really shows what our family is all about. I was a good girl and put all the boxes away too. Not like most holidays where I just have all the boxes stacked up in my bedroom. I must have been really stressed out last year because stuff was all mixed up in the boxes and I even found a plain black sock in one. Hopefully I didn't throw out the mate!

After I got done with that stuff I worked on my mom's photo albums some more. I had went to her house and stole her ink extras (we have the same printers) and I still ran out of one of the colors. When I took Jess to church tonight I went and picked up the one color I needed. I'll probably run out of one of the other colors now. I have about 5 of the light blue and light pinks, apparently my pictures don't use those colors much. Part of the reason I've been buying the ink one at a time instead of the "value pack" now. 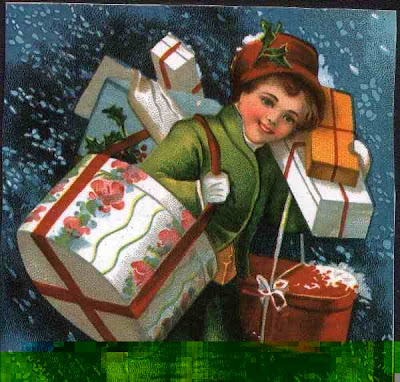 Oh and when I got the mail today my present from Scott was in there. Nice sized Priority Mail box. I'm being a good girl and didn't even peek at his eBay account (I know he bought it on there) OR look at the present and I made him wrap it so I won't be tempted. One year I went and looked at what he bought on eBay and then felt like such a bad bad person for peeking. Although I do kind of think I know what it is...

After picking up Jessica from church we drove by the local "Griswald House". It's got so many freaking lights on I actually found it by searching on google! 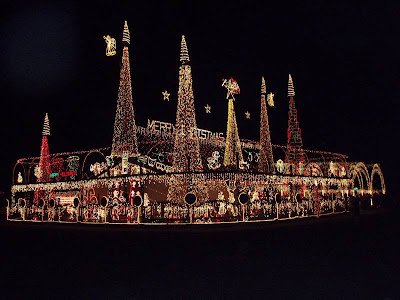 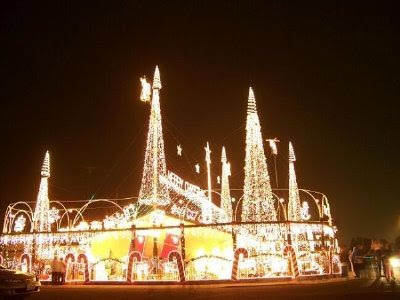 They actually have a company come in and decorate for them. Maybe it's their company I don't know but I've seen a truck & trailer by their house advertising Christmas Light putteroners. Oh maybe Installation is the word I'm looking for. Decorator? One of those.. Anyhow, they have a train track that runs in their yard too. One of these days maybe we'll actually get out instead of just driving past it about 5 times. I'm sure their neighbors freaking hate their guts! None of them even have a strand on their houses. Guess they figure the neighbor has enough to light up the whole block. Wouldn't you hate to have their electric bill??

Discovered tonight that I hardly have any wrapping paper left over from last year. Guess I'll have to pick some up. I almost bought some tonight but was afraid I had 10 rolls or something at home and didn't want to buy it if I didn't need it. That's about the way it always works isn't it?Pin It
Posted by Julie H at 9:35 PM