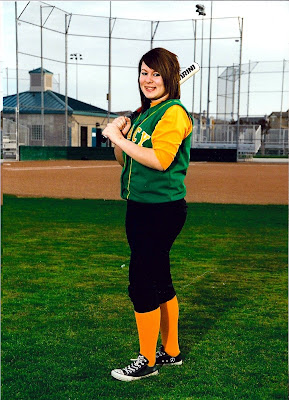 Jess forgot to take her cleats the day of pictures.
This picture make me laugh because it's so "her"

Jessica was playing 3rd base for about half of the game.
Then a girl slid into her ankle.
She said she was fine but for some reason
the coach benched her for almost the rest of the game.

Jessica doesn't like to be benched.
She gets rather pissed off.
Here's the text messages I received while she was "on the bench"

I'm benched for the rest of the game. I don't get to bat either

Cause my ankle. And he won't let me play. It doesn't even hurt.

Can we just go home?

Jane got to go back in after she got hurt I didn't get to.

I want to leave. This is retarded.

And I'm thinking. OMG this is going to be a long ride home.
She's going to be in SUCH a bad mood
and just complain and do the drama thing ALL THE WAY HOME
(it's a 20-30 minute drive)
But wait! What's this?? She's going back in.
SHE'S GOING BACK IN!!

Then she played for 2 more innings and did a great job even though they were losing.

Then it was their last time up and the score was Tracy 7 Ripon 9.
The coach tells them, 3 to win, 2 to tie
(the last time they played them they ended it with a tie-so annoying!).

By the time Jess got up there were 2 outs and the score was tied.
I'm thinking oh shit she's going to strike out
and then I'm going to have to listen to
THAT drama
on the way home.

But no!
She got a nice grounder to the left field and made onto base.
The next girl gets up and gets a good base hit
but they overthrow it to 1st
and fumble with the ball
and Jess makes it in to make the final score!

LOL ok so I'm starting to think Kacey really is NORMAL at least after reading this! Glad she got the final run in and back in after she got hurt. Love the orange socks in the picture!

Woo hOOOO !!! Thank god for that then!
Our Griffin can bitch like you wouldn't believe when things don't go his way too!

OH yeah... those orange socks are .... HIDEOUS! The poor girl having to wear them! I really HATE orange! Can ya tell? lol

UMMMM... don't tell her I said that! lol

Glad she got back in that game. I'm diggin the chucks with the baseball uniform. Take care!

YAY!!!
Don't you just love that last minute rush of adrenaline you get in your kid's games?