Today I worked on the yard a bit. I got this little section done. Then it was HOT and I had to take a break. I went out for a little bit more around 8 until it was too dark to see. 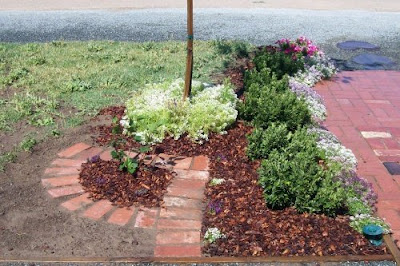 That is an orange hibiscus (according to the tag, no blooms) that I got in the marked down section at Wal mart last week. It appears to be the same kind that I have on the other side, just a different color. The other one is doing great so hopefully this one will too!

It was kind of strange today. Trevor was hardly with me at ALL. Usually he's real close to me chatting me up. Well I've been pushed aside. You see DAD is building him a go cart! They spent all day out in the garage and on the back patio working on it. He was in heaven! 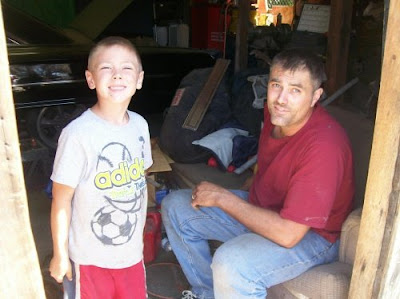 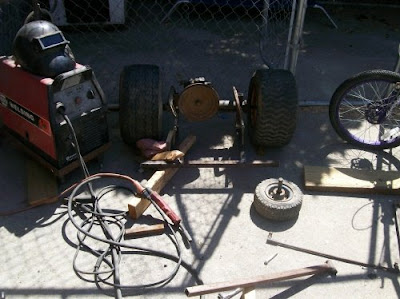 Hmmmm I'll believe it when I see it...

Jessica came home from her big camping trip today. She had fun with her friend's cousin, who just happens to be a boy she kissed last summer. So glad I wasn't the one chaperoning that trip!

Not too long after she got home I opened the door to go outside and there was one of her books on the stoop. She had let the boy across the field (boyfriend around Christmas time last year) borrow it and apparently he decided to return it. He put a little note in there. She decided to go over to his house and talk to him (after doing her hair and make up and putting on nice t shirt etc lol). She got there and another girl was there. She came back all crushed lol.

So rewind, daughter comes home, daughter has drama in about one hour after arriving.

Melissa's friend just got home from Pennsylvania where she was visiting her dad for two weeks. The girl didn't even go home first before they stopped and picked up Melissa to come spend the night. How cute is that? She called her almost every day while she was gone too.

Well that's about it for today. Scott has tomorrow off for the "holiday". No plans so probably more working in the yard!Pin It
Posted by Julie H at 9:34 PM

You yard is looking so cute! I love all the pictures of it. And how cute of dh to do stuff with Trevor! Even if he never finishes it the time they spent together will be priceless!

Poor Jessica...
There's always some chick hovering in the corner. ESPECIALLY when you get all dolled up!!