81 Is Cool & The Biggest Loser Finale

Anyone else have trouble giving  your blog posts a title? I hope no one decides what to read on my blog based on titles! But then again maybe that's why I have so few comments!

Yesterday mostly centered around my Father-In-Laws 81st Birthday. Yes, my husband's DAD is 81.  Crazy!! That's what happens when you have a kid when you are in your 40's! 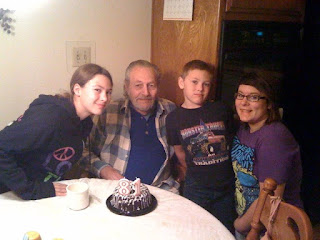 (Wow does Trevor have the tough guy look on his face or what??)

You can click here to see his 80th, good times people, good times.  This year we didn't have any other family show up, just us and his parents and of course the sister that lives there.

We went all fancy and went through the drive thru for some KFC. I even used coupons and it came with CAKE! Score for one less stop! Although I did have to play extra to get a couple pieces of breast meat since I KNOW his mom would be sad if she had to like eat a leg or a thigh. Those are the things you figure out when you've been part of the fam for 18 years. (damn I must be getting old to be around that long!)

Anyhow it was yummy and we stayed until almost 9.

I watched part of The Biggest Loser Finale there but we had to leave because everyone was tired and had to go to bed. So I missed big chunks of the finale and had to look online to see who won the at home prize. I just got a glimpse of Rebecca so I need to look up her haut look (just did, you can see all their pictures on the NBC website.  I know a bunch of people didn't like her but I was hoping she'd win. 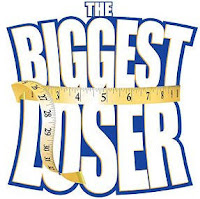 And Tracey? OMG she was all boney! Anyone else think she had the too thin look going on? (but now that I look at her pictures online she doesn't look quite as bad)

I was hoping Rudy was going to win. I know everyone hated him but I secretly thought he was kind of cute and was hoping he'd win. Danny just bugged the crap out of my husband because he was always CRYING and raise your hand if you think he's hoping for a record deal with his guitar playing & singing.

Overall I'm just amazed at how much weight they all lost. Totally transformed. I was totally inspired after last week's episode when they all ran the marathon and I'm really thinking training to do a 5K. I think I need something like that to get me motivated to lose some weight and get fit. Anyone else thinking of doing the same? I looked up the couch 2 5K program and it looks do-able. I just need to get my ass out there and do it. Anyone else up for it? I'm thinking of starting a new little blog just dedicated to that. That should help me stay motivated I think!

HAPPY BIRTHDAY to your Dad. Yes I have lots of trouble thinking of Titles for each day's post!

that is amazing. And did you see how thin Alison is, wow, I haven't watched it in a while since she was pg. I wondered what happens to all that skin but then I saw that they had support garments under their shirts. I hope they pay for some surgery too!

No kidding, comments are so scarce these days! I haven't had any for a while. I think its because facebook is taking over the world.

Couch to 5k sounds like a good plan! At this point I'm just planning to get the couch and my arse surgically separated. Not sure about much more than that. I'd have separation anxiety.

Yay for KFC. I totally screamed and swore at the blank drive thru display because our KFC? Up and fucking left. No notice. Yet, we continue to get muther effin coupons. Bastards.

I would love to be able to do something like that but I'm so not a runner...I get winded walking up hill! Motivate me Julie!! :)

Motivation. I'm asking for some for Christmas!