I guess I need to sleep with the coach...

Well Jess had another softball game yesterday. The coach had been telling her all week that she was going to play catcher at the game. She practiced catching all week. She was pretty pumped up about it.

I got to the game and guess what?
She was playing left field. 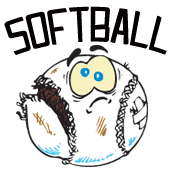 Yeah. Nice, huh? I just don't get this coach.

So of course with the head games going on she struck out the two times she got up to bat. Not making excuses for her but she really is a "it's in her head" type of player. And of course, after striking out she was put on the bench.

She sent me a text saying

I'm really not liking most of the parents this year either. With all the freshman players they bumped up, they are all comp players, which is REALLY competitive. The parents are really rude and demanding on their kids and the other teams.

Hopefully it will get better.
Pin It
Posted by Julie H at 9:06 AM

That would have broken my heart too getting that text :-(
Important to note though - If the coach acts like that...and you slept with...he would probably go back on everything that he promised anyway - LOL (Even if you were really good!!!!)
Just kidding...it will definitely get better!

My daughter had a year of volleyball like that. Her junior year, it was just hell. I am sorry you and Jess are going through that. Sports are supposed to lift your spirits!

I always hated getting coaches like that...honestly one would YELLL at me...that is not a way to push your team...I would say something to him....or the league leaders...lol

AAwww! I feel for your girlie. Tell her to keep her chin up! (like you didn't already...)

Have a great weekend.