Well it's about time for me to get dressed and go outside. Everyone is driving me nuts. That's about my cue to go find something to do besides collect gifts on Farmville. Trevor's laying on the floor in my room banging his feet on the floor because Scott told him he can't have breakfast unless he helps put some dishes away.

Yesterday we started our day off by sleeping until SEVEN THIRTY! Woot. I remember the days when that was getting up early.

Then it was off to the pancake breakfast for Trevor's baseball league. 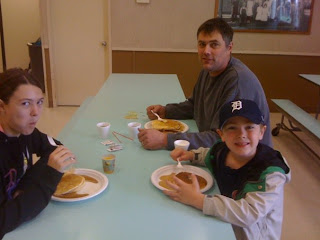 Melissa DID have notice that I was taking a picture. I have no idea why she stuck another bite in her mouth. Apparently she was really hungry! 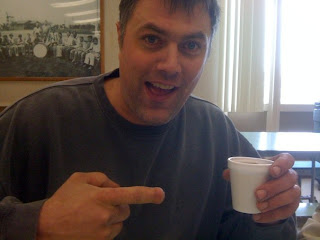 Look at how BIG their cup of coffee was. Slightly larger than a dixie cup. (yes my man is missing the tip of his finger)

After we were done with the breakfast we went over to Target to get a few things, kill some time and get a REAL coffee at Starbucks. Then it was back to the field to get Trevor's baseball pictures taken.

Back home. It was so beautiful outside I went out and worked in the yard. I got this section all dug out and ready for some gravel and sand. 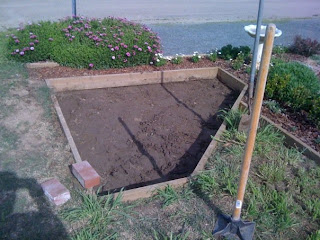 I asked the man to go get some but he was too busy sitting on his ass watching tv and playing Trevor's DS.

THEN I started clearing out the grass in a strip to the left there. I found a nice piece of re-bar and half a fence post that took me about 20 minutes to dig out. I'm glad I never stepped on it with my bare feet!

The whole time I was working outside Jessica was inside stressing about her Spanish lip sync thing. She was one ball of mean so I stayed out of her way. She came out the door and shouted at me that it was 4:15 so I had to go get cleaned up and drive her to another city and drop her off at the school it was going on at. I got her dropped off 2 minutes before she needed to be there (5:00) and then Melissa and I went to Chili's for some dinner, followed by Target and then visiting at my brother's house and my mom's house. She called at 9:00 and said she was done so we went and picked her up.

And guess what?
They freaking got 1st place.

So now they move on but that part isn't mandatory for their class grade. I hope it stays that way. I'm so glad she's done with that and can now just focus on softball and homework after school.

That was our excitement for yesterday.

The kids are helping put the dishes away, amazing. Guess being hungry is a good motivation to help?

I'm still going outside though!Pin It
Posted by Julie H at 9:34 AM

Jesus- I am just now beginning to see my planters that Matt never brought in. Super.

You play Farmville too? I just started and I'm hooked. It is the best game. If you want to be my neighbor just let me know.