The last time we went to Vegas was in 2008, just Scott and I on an anniversary trip. This time we went with 3 other couples, my brother, Scott's niece (who is my brother's girlfriend), my other brother and his wife, and then some friends of theirs.
Like usual we booked our trip through Allegiant Air. SUPER cheap trips people! It was such a great deal that's why we went when my brother invited us to go with them.
We left Sunday afternoon. My mom came to take care of the kids and the puppy so I had the house all cleaned up and most of the laundry done before we left (because I knew she'd clean if I didn't, which is nice but I didn't want more work for her). When we got to the airport everyone was in the bar already getting their drink on (except for my brother's friends they came to Vegas the next day). It wasn't long before we were on the plane and then landing (it's a one hour plane ride). My brother had his first time in an airplane and my parents didn't lose all their children in one airplane crash.
When we got to Bally's we were booked into seperate towers from my brothers somehow, which sucked but oh well. We had a better view. 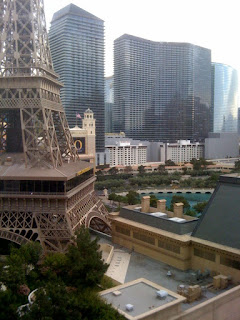 Apparently they had a view of the roof.
The first thing we did was find something to eat. We ended up at one of the hotel's little restaurants, The Tequila Bar & Grill. My brother ordered the nachos appetizer. The waitress said it was big. Apparently she wasn't lying! 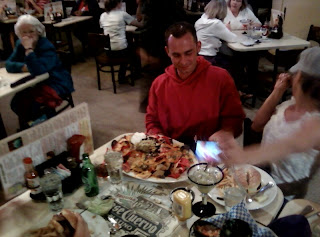 It came out on a plate the size of a turkey platter! Needless to say he didn't finish it (or make much of a dent!). It was a little pricey to eat dinner there, we spent $50 on dinner. Later we saw that we could have had $1 margaritas and $1 tacos instead of our $15 pitcher and more expensive meals.
After that we met up with my cousin Al and his girlfriend. She is from Vegas so she was going to take us around a bit. We quickly all decided she was slightly crazy. She took us to a little bar that was packed and Scott and I decided to bail since we were feeling a little uncomfortable.
We headed over to NYNY to get our big drinks like we got last time. 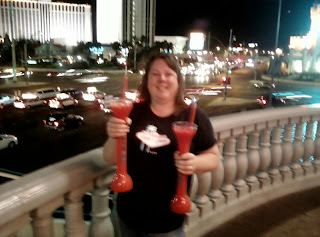 We decided that we'd drink them on the way back to the hotel. This is us about 1/2 way down the street 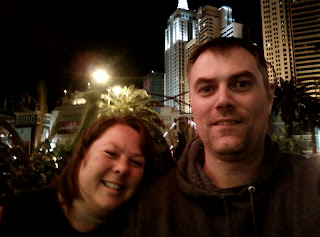 Feeling no pain.
We made it back to the hotel room and relaxed a bit (watched Shrek of all things) and then had some "alone time" and crashed out at 10ish. Great first night in Vegas eh?
We woke up the next morning around 6 or so and then got showered, dressed and went out looking for somewhere to eat. All the buffet lines were super long and we ended up over at  Bill's next door. The service was great, the food? Not so much. I wouldn't recommend them.
After that we wandered around a bit and ended up over at Caesar's Palace which is pretty beautiful. Eventually the group met us over there and then they all decided to eat there so we just played some more.
This isn't a very great picture but they have this HUGE aquarium over at the Mirage. That's behind a counter of some sort. 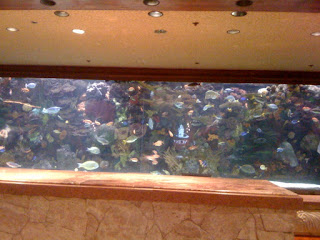 Later Scott and I went over and refilled our cups and then hung out at NYNY a bit. 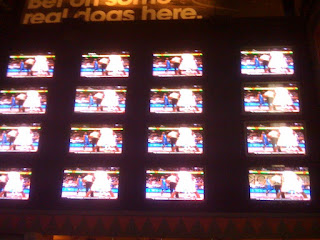 All these screens? They really play with your head when you've had a BIG drink!
After that we met up with everyone at this outside bar/club and me dancing my drunk ass off. I seriously never dance and now I'm wondering why not? It was soo much fun. Scott of course wouldn't dance, which sucked at first but then I just went in and danced with other people in our group and it was all good.
Here's the group while we waited for someone that ran up to their room. 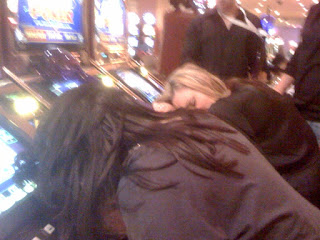 Yes, those are slot machines lol. I had a temporary panic attack right after this when my driver's license wasn't in my pocket. I found it a few minutes later on the floor under where I had been sitting. Can you imagine how much that would suck to lose in Vegas when you have to have it to fly home? What would you even do? We stayed up pretty late that night, we hit the Tequila bar when we got back for tacos and a margarita for me. Followed by more slot machines. I think we went to bed about 4:30!
So of course the next day we slept in pretty late. We all went to breakfast at a buffet at Planet Hollywood. It was really good! We all split up a bit after that and my sister in law got her nose pierced. I didn't get a picture either darn it.
Later that night we met up to go to the Tournament of Kings. We almost didn't go because we didn't know if we really wanted to spend $100 on dinner and the show. After we were all their getting our tickets it was more like $140 after their "taxes" and whatnot. We were going to back out but my cousin decided that he wanted to give us $40 to make up the difference so we'd go. That was rather nice of him!  My brother's friends decided not to go because it was too expensive too, and that was actually the last we saw of them until we got on the shuttle to go to the airport.
The dinner was pretty good and the show was interesting but not really my "thing". Although the topless guys in leather pants made it worth it! Yummo. 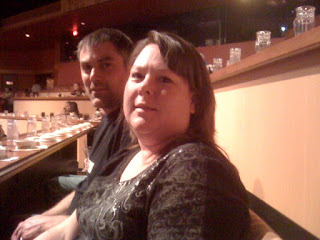 Here's a way too close to my neck picture of us before the dinner. 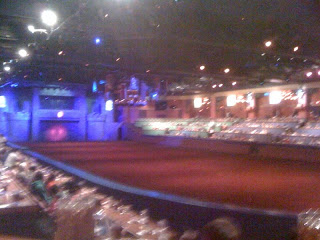 A blurry ring.  (Maybe for mother's day I'll get a camera?)
After the show we went up to the casino where my brother sat at a bar and played video poker while we waited around for my cousin to come back from somewhere. We seriously probably wasted 2 hours watching my brother play video poker and waiting. Eventually my cousin showed up and then he was gone again and we were waiting again. He finally got back with his crazy ass DRUNK girlfriend. He was totally smashed too so they were quite the pair. We all finally made up our minds to go to the MGM to see the lions. I swear it was like an act of congress to get over there with everyone. We finally get over there and the lions aren't there (it's closed) and we've lost 1/2 the group again. I was really starting to get pissed off.
My SIL wanted to go to the Stratosphere so we finally decided to quit waiting around for the other brother and my neice and just go.  We found a taxi and hopped in (cousin and the crazy chick had to take another taxi), and finally got over there. 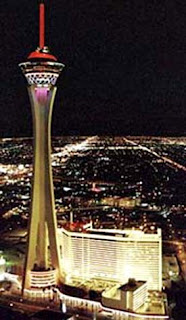 See that red thing up top? That's the ride she wanted to go on. Freaking crazy isn't it? It's like the drop zone only backwards. We went up to the viewing area but Scott and I didn't want to go on the ride. Cousin Al and the Crazy chick went on all the rides which I can't believe they didn't puke on because they were crazy scary.
Here's the view from the viewing area. 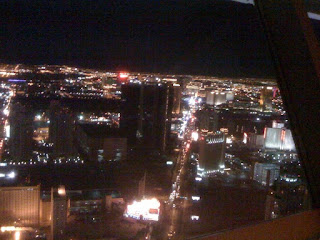 The shiny things in the middle are cars on the strip.
After that we played the waiting around game again. About an hour later we finally were together with Cousin Al and Crazy chick but then we seperated again to take a cab back to the hotel. Darn.
We got to the hotel and then kind of hung out a bit with everyone playing different slot machines and gambling. Everyone was ditching the Crazy girl. We finally went to bed at 3:30ish.
Got up the next morning and we had breakfast at Sbarro's with everyone (buffet line in the hotel was too long and there wasn't enough time to go anywhere else).  Then it was back up to the room to grab our bags and check out.
See you next time Vegas!!
Pin It
Posted by Julie H at 1:16 PM

Sounds like fun..LOL! I am thinking a group of 4 is max for that kind of thing. Too many opinions and too many things to do. Glad you had fun!!! How was the house when you got back???

Seriously- I need to go to Vegas. I'm like the only fucking loser I know who has NOT been there. (hang head in shame). May 2011- Sara vs. Vegas. It is on baby.

OH you lucky tart! I so want to go there one day, AND I WILL.
Just have to get rid of our little kids first... *sniff*