A Bit of This And A Little Of That

So do you watch The Last Comic Standing? I've caught a few episodes lately. I love comedy, and after watching that show I can think of so many things to blog about. I need to start writing them down. Afterall, being a mom is it's own little comedy show isn't it? You might not be able to laugh about it NOW but it sure is going to be funny when you think about it later.


Like the time when Jessica was a few years old and we went to Hometown Buffet. We had just paid, got our food and sat down when she started projectile vomiting.
At the table.
I tried catching it with a cup, but of course it went in the cup, around the cup, on the table, on the floor. We had to get up (moritified) and leave without even eating and leaving a trail of puke behind us. I thought for sure I was going to die of embarrassment and felt so bad about the mess we left behind.
Then there was the time that we were in Wal Mart and Trevor ALSO decided to start throwing up. While we were in line. In a fit of panic I spotted a garbage can and was able to drag it over. Also some paper towels by an empty register. As I was trying to get him to the bathroom to clean him up a bit, who do I see? The uppity uppity PTA running mom from the school.
Don't mind us, we just have puke all over.
In other non-pukey news, check out my first ever home grown vegetable. Or is is a fruit? Isn't that a lifetime debate about a tomato? 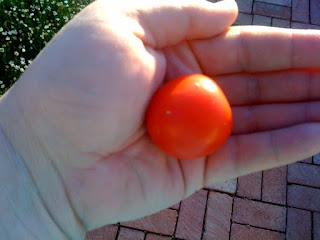 Yes, it's small. But it's brothers and sisters look like they are going to be a lot bigger. I haven't eaten it yet, I was saving it to share with Trevor, since it was his idea to buy a tomato plant in the first place.
Have you all seen that site http://www.shitmykidsruined.com/ (hopefully that's right I can't go there at work, stupid filter). I think I need to start one with crapmydogruined. Not a day goes by without him doing something. This was 2 days ago. 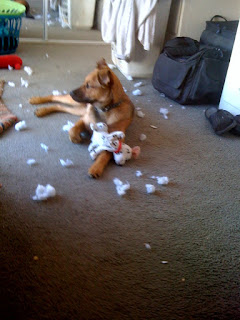 Yesterday he ate Scott's A's hat. This morning he was ON THE KITCHEN TABLE eating out of the cat food bowl. Which by the way, is on the table so the dog can't get to it. I guess I'm going to have to rethink that. Oh and the other day? He chewed up a FLASHLIGHT. Yeah.
Last weekend we went to my brother's house to use his pool hang out. It was about 100. Summer is upon us! My other brother, his wife and my niece showed up after a bit. My kids just LOVE their little cousin. 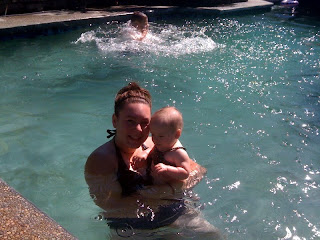 Monday Jess got her PERMIT. My days of being a Mom Taxi might just slow down a little bit come December when she can actually get her license. My smart girl only missed 3 on the permit test. She has her behind the wheel training in about a week and then she can drive with us. I let her drive down the street and around the corner a couple of times now. So far we haven't died.
Pin It
Posted by Julie H at 7:55 AM

LOL!! I love your blog...found it by clicking the "next blog" link. I'm gonna go check that shitmykidsruined website later (stupid filters at work too). You are hilarious, I can so relate to all this! Keep blogging, I read ya all the time! :)

My son (now grown) had reflux back when nobody'd heard of it and let me tell you.....that kid puked in every restaurant in the county! From the fast food joints to the upper crust, he baptized them all.

I have had 8 kids, they have all thrown up in public at some time... I don't even blink now!
That tomatoe is cute... I always think of them as a vegetable!
Your puppy is so naughty... like our puppy is too... only Coco is never going to be able to jump on the table... I'm really happy about that! lol
I hope you have nerves of steel.... travelling in a car being driven by one of your kids is really scary!!!

I wish i had a friend or family member with a pool lol. My brother in law just got his permit....and as of now the sidewalks are still safe!