You're going to do what?

So my sister in law got it in her head that she had to have the baby's party at a park. All the parks in their area have to be rented. Except for one, which is first come first serve. They started stalking the park to find out just how early they had to get there to be the "first". 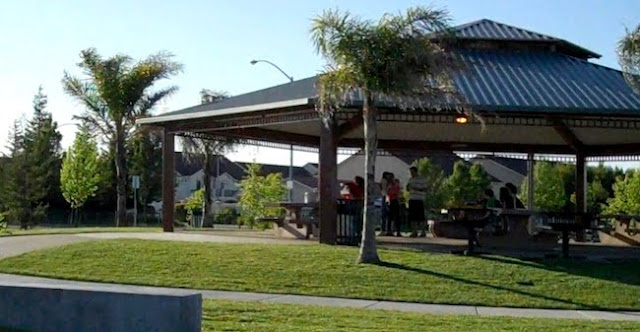 Turns out? It's like more than 24 hours! Isn't that crazy? They made a plan to take turns camping out there. My sister in law got there at 9:00 am the day before the party. She stayed there all day and other people took turns hanging out with her. I went there at 8:00 that night to bring the girls to spend the night so they could help with the set up on Saturday morning. We hung out for about 2 hours before I took the kids to my other brother's house.

While she was there a ton of other people showed up prepared to camp out. One of the other groups went for the much much smaller gazebo on the other side of the playground. I was thinking that they were definitely going to get kicked out by the cops at some point. She said that they drove by a couple times but never even stopped.

I kind of thought she was nuts! Camping out for two days for a baby's first birthday party? Seems like it would be easier to just clean  your house! But it turned out to be really nice. Not sure anyone would ever do it again though!Pin It
Posted by Julie H at 9:32 PM