It's Sunday! Pull up your chair and get your coffee!

First off I want to say how incredibly sad this is. I just don't understand how people can be so cruel as to kill children. It's just too bad someone didn't shoot him. He doesn't deserve to live. My heart goes out to all those parents.

So yesterday I worked on the invites I'm making for my sister in law's baby shower. I finally got one completed, what do you think? The theme is going to be Pearls and Lace, and I tried to coordinate the colors with her nursery set. 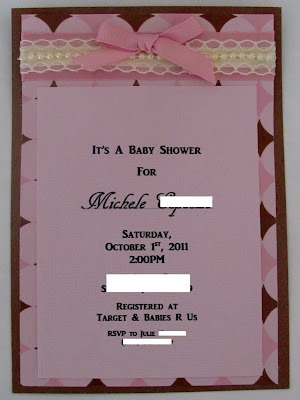 I worked on them until I slowly ran out of everything!
I ended up running to Wal-Mart to get the Xyron refill I needed. I've so become a hater of Wal-Mart but there are some things that you can get there that are so much cheaper than anywhere else (like half the price for this refill) that it's worth the trip. The Wal-Mart closes to my house was remodeled to be a mini Super Wal-Mart. That's because the city wouldn't pass for them to build an actual Super. So they basically took all the craft items and took them out and only have ONE AISLE of sewing things and half an aisle of scrapbooking/craft supplies. Pretty sad and one more reason why NOT to shop there. Luckily for us they brought in a Joann's one exit down at about the same time they did that. Which is where I had to go to get the rest of my items. So now I'm all stocked up and can finish my project (I hope).
When I went to the stores Jessica had my car (hers has something wrong with it) and so I ended up taking my husband's little beater commuter truck.
That has no air conditioning.
Which pretty much wiped me out. I don't sweat like a regular person. I just turn red and overheat. It really sucks! I need to figure out how to drive a stick so I can at least drive our other truck that has AC when things like this end up happening.  Plus I feel all ghetto driving that thing. And it's bright yellow so it's not like anyone is NOT going to be looking at me driving it. I don't know how my husband can drive it for such a long commute every day. I told him I'd rather pay more for gas than drive that!
Well, onto today! Let's see what today holds shall we?
Pin It
Posted by Julie H at 9:10 AM

They did that to our Walmart too, and all of the walmarts anywhere near us. Stripped the craft and sewing sections down to nearly nothing and expanded the grocery section. I asked a Walmart lady with a clipboard, she was acting all high and mighty so I figured she'd be a good one to ask - she said it's called "Expanded Walmart" since that's as close as they can get to being a Super Walmart. Still doesn't make sense since Super Targets are allowed. I think Joanns is sleeping with Walmart. Gotta be!

Your baby shower invites are gorgeous!!!