Well tonight I paid for Jessica's dorm deposit. She has two roommates too. How did they decide on each other? They all sleep with fans on. So not making that up.

She got her cap and gown today too. She has the rest of this week and next and graduation early Saturday morning on the 2nd. Then we are going to PAR-TAY. Should be fun. Well, after my house is clean and my yard looks nice.  I think I've had more parties in the last year than I have the whole time we've lived here.

In other news, I had an order for another cupcake stand last week. This one was just for pink rick rack so I found records with pink on the labels. Fun stuff. One of the thrift stores that I go to has a ton of records. I just sat on the floor and pulled them out until I found good ones. I bought extra because I always look on eBay to make sure it's not some rare record worth a bunch of money before I glue them together! Nothing too exciting in the batch I bought. Here's some quick before work pictures. 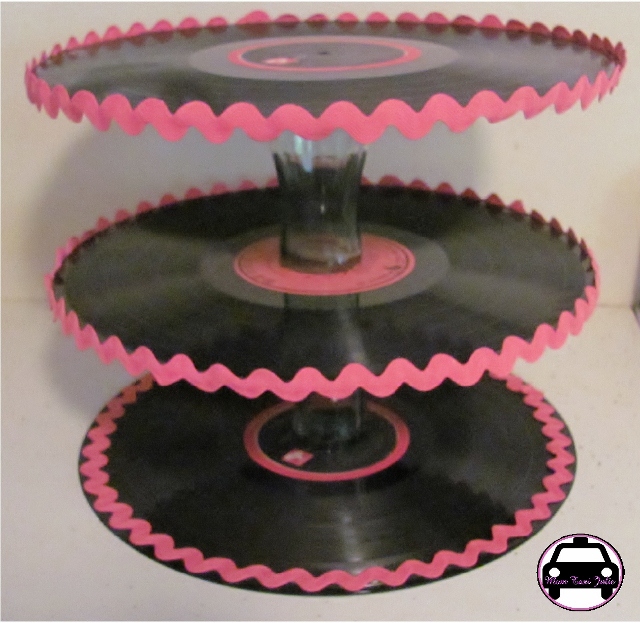 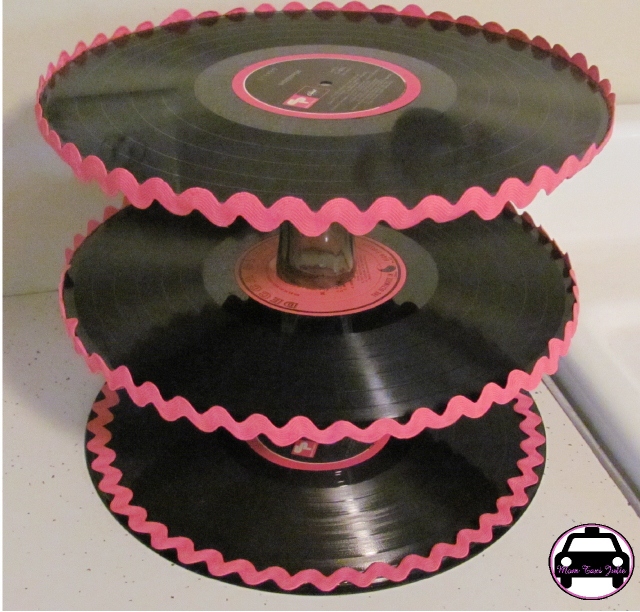 I want to buy a record player. We used to have one but gave it away and the kids ruined the needle on my old Mickey Mouse one (need to get that fixed as soon as I figure out how/where to take it). I think it would be fun to buy a bunch of random records at the thrift store and listen to them.

I remember when I was a kid my Dad and Step mom had a large collection of records (and an 8 track converter that went into a cassette player in the car!). They had them on wood and cinder block shelves. My Step mom was making thrifty look cool before it was all over Pinterest :wink:

I only had a few records growing up. Well I had a large Disney collection that my mom still has. The full size records with story books (like the ones in my Etsy shop) My Mom's Grandpa John had signed me up to receive the records in the mail (like the book clubs they do now) without telling her. The first record came not too long after he passed away. My Mom just made me a list of them the other day and there are 30 of them. Pretty cool gift! She's not ready to turn lose of those yet even though I keep asking for them. Maybe when I'm 40 I'll be old enough ;)

I also had a bunch of the little 45's that were Disney stories too. I still have those and my Mickey Mouse player.

I only had a few "grown up" type records. Michael Jackson's Thriller, Betty Riot, Bruce Springsteen and I think a Cyndi Lauper record. That's about it. ALL were gifts.

Labels: Disney Records, Record Cake and Cupcake stand, records, Sock Hop, When I was a kid

I have just shy of 400 albums.
All in excellent shape.
I bought frames and have some framed at the lake house.
I change them out annually.
I have Beatles, Woodstock up to my last album in 1987 or so of Melissa Etheridge. Then CD and the art was no more and honestly I miss albums.
Oh well. Everyone tells me they are worth something but yet i don't know where to go except ebay and I wouldn't get much $$ from the 1960's to the 80's.

I have a turntable and we listened to some a year or so ago. the sound of the needle hitting the album and the hiss was a hoot. But hearing some of that old music was priceless.