If you are not a car person or of a certain age you probably don't really know about the movie American Graffiti.


And if you aren't from around where I live, you probably don't know that it was filmed in Modesto, California. Which just happens to be the city I work in and the closest large city to where I live. Apparently every year for the past few years they have done a month packed with events around the whole Graffiti night theme.

Fun stuff!
Thanks to Facebook friends I decided to go at the last minute. Only Trevor and Melissa were home with me so I asked who wanted to go. Melissa thought the TV was more exciting so Trevor and I got ready real quick and jumped in the car.

I was a little worried about parking but I found somewhere to park just a couple blocks away with no problems. As we walked towards the main drag we saw all the cars starting to line up.


I sent my friend Eric a message and he and his wife were only a couple blocks down so we walked a little farther and then watched together.


At first just a few cars were going down the street and then there were more and more until finally all the lanes were getting full and it was like cruising down Pacific Avenue when I was a kid only the cars were a little older.

My mom FORBID me to go cruising when I was in high school. So of course we went anyways. I don't think I ever did drive (my car was a one of a kind piece of crap and I definitely didn't want to get caught!). Most of cruising for us was driving along looking for hot guys, doing a little hooting out the window, and I think ONE TIME only did we actually stop and talk to some guys, none of which I ended up hanging out with myself.

Back to the parade. So we are watching the cars go around and around, they were doing a big square around the downtown area just going around and around for a couple hours. Trevor was getting super excited when the people in the cars would throw candy. Suddenly this little boy that was next to us asked him what school he went to and what is name was and the boy's dad says "you were at our house!". Yes, small world we were standing next to someone that we know. Well not me personally but Scott went to their house to watch the Super Bowl and Trevor went with him. Crazy that we would end up standing to them on a huge even on a random street corner.

The boys had a great time hanging out for the rest of the show. Trevor came home with totally stuffed pockets of candy.

We left just a bit before it was totally over but the cars had died down a bit. We got out of the area with minimal traffic so the whole trip was quite a success! We're going to have to watch for it next year and make a night of it.

I kept the pictures small on here so I could share more, just click on them if you want to see them bigger. 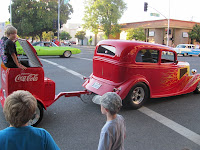 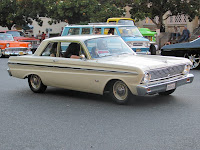 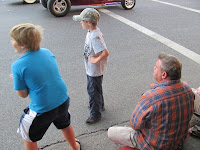 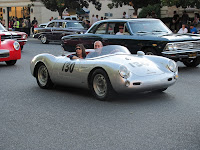