Slowly coming back and I went to Nebraska

Slowly coming back to the land of the living. I missed 2 days of work last week because I was sick. Sucked it up for 2 days and then had Friday off to fly to Nebraska for my friend Dee's daughter's wedding.

My friend Carolyn and I flew to Nebraska (barely made our connecting flight) and then had just enough time to get our rental car, get to the hotel, change clothes and then we were off to the rehearsal dinner.  (Side note, my ears refused to pop after landing. I spent a couple hours doing annoying yawns and blowing while holding my nose until they finally gave way!)

We weren't in the wedding but got invited to the dinner since we are special like that haha. I FINALLY got to meet my friend Dee's brother. We have been friends for almost 20 years so I know all about the guy. We had a great time all hanging out all weekend.

The rehearsal dinner was nice even though they didn't have any whiskey in the little bar they set up. Ok fine I'll have some wine. Back up drink to the rescue ;)

After dinner we went back to the hotel and then to hang out in Dee's suite she had for her family. They had already been there a couple days so in usual Dee fashion she knew the names and life stories of all the staff that worked at the hotel. She cracks me up! So while we are hanging out they keep trying to get me to drink but I'm like sooo did you ever get your mother of the bride dress hemmed? That little shit, I knew she didn't get it hemmed. So Robert (her brother) drove me across the street to Wal Mart so I could buy some stuff to hem up her dress. Thank God for 24 hour Wal Marts as much as I hate that store. I cut 4 1/2 inches off the front of her dress and we all decided the back could stay longer. It had panels of sheer and then lace so toward the end I let the other girls help  hem the lace parts. All done by hand until 2 am. Oh and I also bought a bottle of Crown while I was at Wal Mart ;) 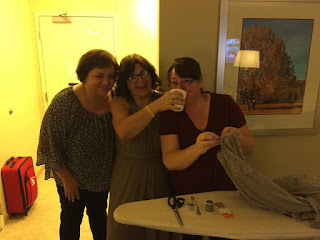 That night Carolyn and I took turns snoring. I swear at one point I thought the walls were shaking haha. She said I do a humming thing when I snore. At least we are in good annoying company.

We slept in until almost 10 am which was really only 8 our time. At least we got some sleep. We got up and showered then decided to go out to breakfast. I picked the closest Ihop to us and then we went and had the worst waitress I've ever had. I think it may have been her first day waitressing ever. the place wasn't even busy but it took forever and even getting change when we paid the bill was an issue. By the time we were finally out of there we had to rush back to get dressed for the wedding. 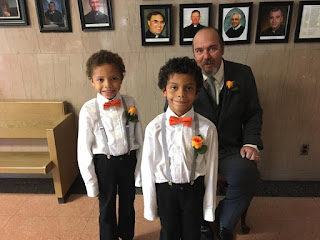 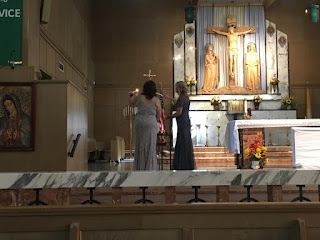 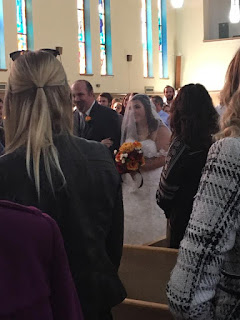 We got there on time but of course it took a bit for things to get going. Really pretty catholic church. We sat on the bride's side for the "family". Thank God I brought tissues since we all used them. I used to wonder why all the moms cry and now I know it's because they are so goddamn young and don't know what the heck they are signing themselves up for haha.   After hours and hours the wedding was finally over.  I'm not sure if the married each other or just the church ;)

Then we had two and a half hours to kill before the reception. how weird is that? The wedding party all left the catholic church in a "party bus" so you know what they were all doing in there. Us old people went back to the hotel and hung out in Dee's room for a bit.

Then it was off to the reception that was pretty close to the hotel. They had a lot of big round tables. TONS of people. I think over 200 and probably 50 of them were kids. Dee had told us we had to eat and drink since it was costing a fortune. So we did! We also danced all night. Even Carolyn who always complains about her knee danced and danced. Great fun and good memories.

After the wedding was over we went back to the room and changed into comfy clothes. Carolyn went to bed and I went and hung out in Dee's room until 2:30 or so. We had to get up super early to take back the rental car and catch our plane so I didn't sleep much but hey, it's not every day one of our kids gets married right?

Lucky for me my ears didn't get stuck on the way back. Sadly I felt super sick Monday at work. I made myself a doctor's appointment where I got a new inhaler ($41??) and a zpack for my chest and ears. Lovely! I stayed home Tuesday and now that it's Thursday night I'm finally starting to feel a bit more normal.Pin It
Posted by Julie H at 9:49 PM

I'm telling you, it's the cold that keeps coming back to life. Watch out! And, yeah, I cracked up about the crying-at-weddings thing...they're so innocent and young and have NO IDEA what's ahead of them.