Day 3 of camping we decided to go to Camp Richardson for our annual bike ride, followed by ice cream. On the way we stopped by here to see the view. 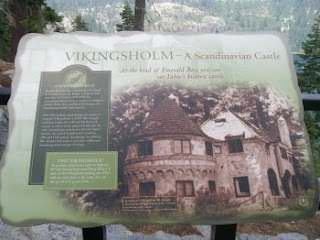 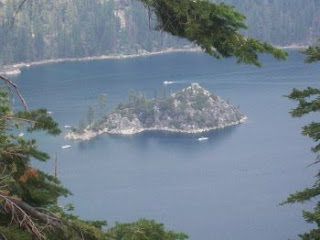 Trevor was having a great time. He's started making funny poses now when you go to take his picture. 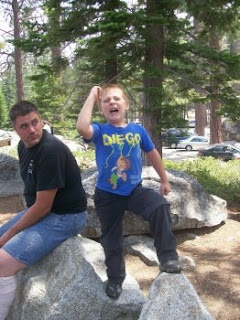 While we were there there was a lesbian couple. I know it's supposed to be normal to see this now but I still can't get over that OMG feeling when I see 2 women together. They did have some cute little dogs though lol. 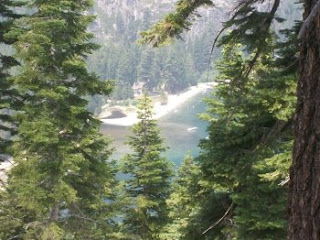 A had brought some binoculars and Melissa had a great time looking through them. 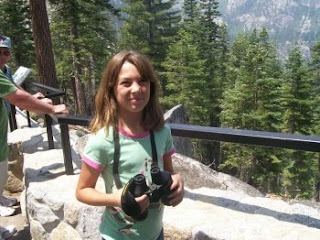 After this we got back in our cars and drove down to Camp Richardson where only about half of us went for the bike ride. We ended up in 3 different groups. When we were done we went over to the ice cream place and got our ice cream. I only have pictures of Melissa since she was in a different group. 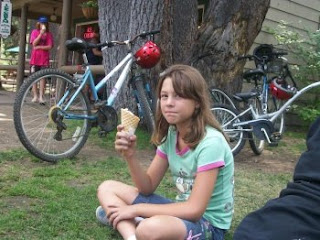 So after our bike ride and ice cream we went back to the camp site to hang out. Everyone was sitting in the shade hanging out so I got my book and some snacks and sat down to read. The guys got up and started cooking the ribs on the BBQ and I was pretty much sitting by myself when A says "I see a bear!". I look over and about 20 feet away see brown coming towards me. I was like "OMG!!! What do I do" So I get up and kind of walk-run over to Trevor to make sure he's not in the path of the bear. He's fine and I show him the bear. We are all kind of watching it. Scott runs to grab the camera. And then it comes up to MY CHAIR and picks up MY SNACK BAG (which was empty) 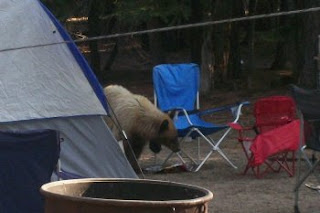 Yes I was sitting in that blue chair about one minute before this. HOLY CRAP!! And it was nice and bright outside. Never thought we'd see one during the day. After it got done inspecting my snack bag it started to walk towards the bbq. That's when we all kind of woke up and started banging on stuff and Scott yelled really loud "GET OUT OF HERE" and it turned around and ran away. Apparently my face was 10 shades of white when all this happened because I got teased about it for the rest of the trip lol.

After they got done cooking we were all kind of thinking that maybe bringing a big BBQ wasn't such a good idea since it is NOT going to fit in a bear box. They turned it up high and burned everything off the grill hoping that would keep them away.

Later the camp host drove by and said that a bear had stolen a loaf of bread a few campsites down. We of course gave him our story.

The next morning we learned that during the night a bear had opened the door on a Yukon the next site over and got into the steaks they were marinating. It took 2 out of the 4 and left a mess all over their car. After hearing this I was a little more freaked out! Especially since we were all sleeping in a tent right in the middle of all of this!Pin It
Posted by Julie H at 10:18 AM

Beautiful pics! Looks like you had quite an exciting time!

Is that you in the photo wearing the orange/peachy shirt - or your friend? Ever heard of dopplegangers? (Your unknown identical twin?) I could almost swear it was a photo of my friend from Ky - Karen M.!!! The resemblance is uncanny!!

Have a great weekend! Thanks for visiting me!

If I ever visit you, I ain't going CAMPING OK? Friggin bears... eeeekkkkkkk... no way, I a big chicken... they eat people! I would have run screaming to the car and locked myself in! FOREVER. LOL..... lovely photos though!

Aw, poor bear. He's probably going to end up dead if he keeps that up. Glad he didn't get your bbq.