It's foggy out and The Concert!

I can't believe how many people don't turn on their headlights when it's foggy! Old people and young people! I took Trevor to school this morning and passed at least 4 cars in our little neighborhood without their lights on. DANGEROUS!! 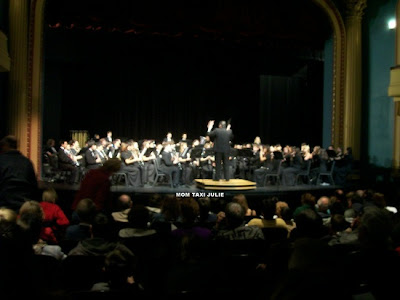 Last night we went to Jessica's concert. It was at The Grand Theater which is an old movie theater that they rebuilt recently to turn into a performing arts theater. This was the first time I'd been in there and it's really nice. Although I didn't really like that Jessica had to be there at 5:45, they were supposed to start seating at 6:30 but it was more like 6:50. Glad I took Trevor to Grandma's. There is no way he would have held still for that long without flipping out. 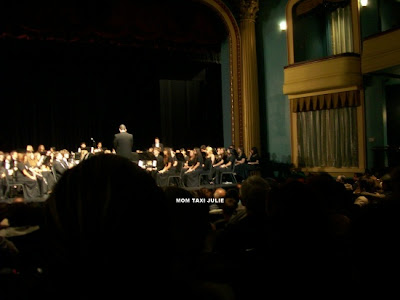 When we got there we saved a seat for my mom. She got there right as the concert was starting and had my step dad and my nephew with her. They went in the door on the other side of the theater so couldn't see us waving at them. She found a seat for her and my nephew and my dad was standing up. Eventually he saw us and came over and sat with us. After the "concert band" portion of the concert was over my mom moved up by us. 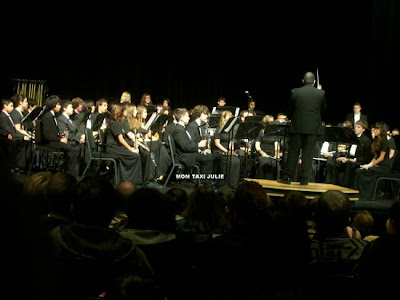 The whole concert was pretty depressing music. It's kind of sad that it was a Holiday program and they didn't play any Christmas music. The Jazz band did play some Christmas type songs but even their songs were kind of depressing sounding. HELLO, it's a JAZZ BAND pick something that's a little more upbeat! Probably the best song they played was the Charlie Brown Christmas Song. But if you remember that is kind of sad sounding too! 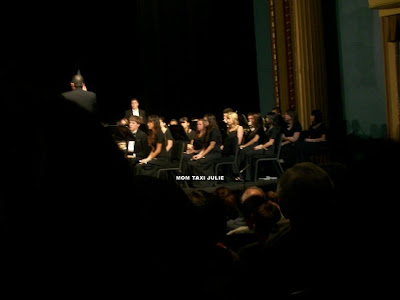 There's my girl 2nd from right. Maybe some day I'll get a really nice camera so I can get good pictures at things like this! 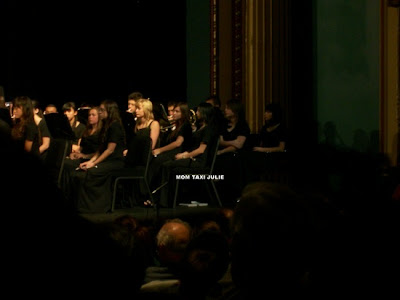 I think my favorite part of the whole night was when we were driving to pick up Trevor and Jessica was talking to her "boyfriend" on the phone (heaven help me) and she was talking about how her dress looks like a trash bag and then she realized it was shut in the door. She really cracks me up sometimes!!Pin It
Posted by Julie H at 8:39 AM

Those without lights have a suicide wish. That is insane! That is neat they made a theater..prob much bigger than the old one. :O)

What?!? No Christmas music?
That sucks!
All depressing music?
Wouldn't be able to do it!