So my husband's family doesn't get together very often. I always thought it was odd that no one really came around for birthdays or holidays. Usually it's just us and maybe my brother in law, and of course his sister that lives with his parents. So that's 3 out of 6 kids. Hardly any grandkids or even GREAT grandkids. I can't imagine not seeing my family more than once a year or less!!

His nephew decided to host a family reunion, calling it the "1st annual" which I think is a great idea! We all seem to have a nice time when we do get together. Originally it was going to be in our city at a park but apparently my mother in law thought it would be too cold (she gets cold when it's 115 outside). SO they moved it to their home, which is about 45 minutes away, which is not a big deal unless you are 80 and only go to the grocery store that is 2 blocks away once a week and that's the only time you leave the house.

I had tried to get my husband or my sil to drive his parents, but my father in law wouldn't give up the keys. Which I KNOW has got to be a horrible feeling. Your kids telling you that you are too old to drive, can you imagine??  So somehow the plan came about that my sister in law would ride with them. Somehow we ended up at the in laws house waiting for my sister in law to get there (which I KNEW she would be late and she was, over an hour!!). So not off to such a great start. Finally get on the road, us in front, fil driving behind and my husband's nephew behind my fil.

We had printed out directions, which were almost immediately discarded because my husband didn't want to take the first turn. Soo we drove along and of course made wrong turn, at which time I pulled out my phone, which has GPS and got us eventually  (with my husband freaking out!) onto the highway and then before long we were there. And then somehow it was all MY fault that we took a wrong turn?? Weird.

So the party itself was fun. Didn't do too much visiting with my mother in law or her girls because they were all sitting in a tight circle in the back yard chain smoking. It was like sitting in the line of a camp fire with all the smoke. I pretty much abandoned them and hung out with all the "married in's" lol. Lots of great ladies!!

We took a few pictures, although no great ones from me since I still need to buy a camera! Waiting for the hot smoking Christmas deals to get myself a new one.

Here is one that someone else took. This is everyone that showed up minus 3 people that stepped out. 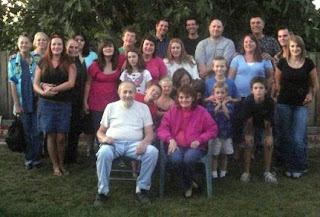 Oh and did I mention that my brother in law left right after we got there? Apparently he had another party to go to :( Stinks that we ended up being 2 1/2 hours late so didn't get a picture with him and my niece. One sister didn't come also. So that's 4 children that showed up. I tried to get a sibling picture but they wouldn't do it. WTH?

Here is a "grandchildren's" picture 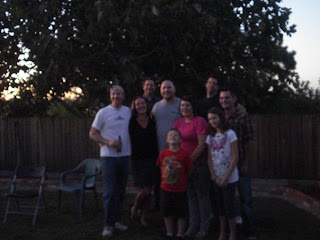 Not a great picture and of course there are some missing that didn't show up.

There were lots of little kids there! 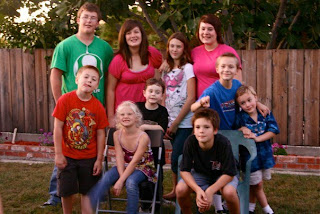 Jessica hit it off with her cousin "Jessica" (mine is older!). Kind of funny they were both wearing the exact same color shirt. Melissa said she needs more girl cousins although she did play with the little blonde. These kids are all 2nd cousins to mine.

When we got in the car to go home I asked hubby if he knew the way and he said "kind of" and I told him that I wasn't guiding him so hope he could figure it out (payback's a bitch!). We did the caravan thing again and only had to do one turn around for a street we missed. We were almost home when we see flashing lights in the rear view mirror. I was like "which one of us is getting pulled over?" Turns out it was my fil because he ran a stop sign. He was so paranoid about losing us he was running all the stop signs so no one would get between his car and ours. He got lucky and got off with a warning.

So we made it home, almost without anything bad happening!! Although my SIL said that next time she is driving lol.

(PS where's the spell check on the updated blogger thing??)Pin It
Posted by Julie H at 11:42 PM

My husbands live family consists of his mother. That's it ~ so no reunions there. Most of my mom's family is in NJ and they do reunions once a year... I've just not been able to make it up there.
We need a good family get together!

Oh how I dread family reunions. My family never has had them so its just hubbies family that does, I don't know any of them very well, they have awful food and are usually held in some small town 200 miles from anyplace.

Sounds like fun! It'll get better every year! Ours is awesome, always a great time. We do it once every 3 years because people have a ways to travel.

I'm glad it went well... family get togethers are fun... we don't do them often enough I reckon.

Hi Julie,
Thanks for visiting my blog. Sounds like the 1st annual family reunion went pretty well. Our family is pretty close and we look for any evenet to get together lol. When I tell people that the look at me cross-eyed, but it's true!
Blessings, GG
P.S. Enjoy Thanksgiving ....