Why it takes me so long to get anything done

All my kids are gone at the moment. Melissa is at camp and Trevor is spending the weekend with his cousin. Jessica is at a party and I'm waiting for the pick up call to go pick her up. Six more months and she can drive herself! Well maybe if Scott gets the car running for her.

One of my sunflowers is finally open with it's big blooming head! The one on the right is a little bit taller all of a sudden. Sometimes I feel like a little kid on Christmas morning when I see my plants blooming. It's pretty amazing that such a big plant can grow from one tiny little seed. 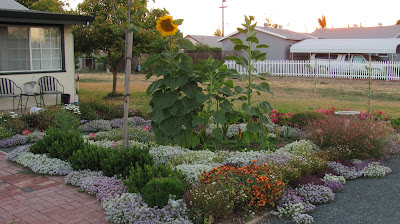 Not the best picture  since the sun was going down. It was really really hot here today. About 105. Scott wanted to work on the garage but first we had to go to Home Depot, which then turned into a trip to Lowe's. We don't have a Lowe's here so we had to go to the next big city. Still didn't find what we wanted but bought all the other stuff there since we were there. I picked up a new blanket flower plant. It's similar to the one I have but more upright. Maybe I will get it planted tomorrow. I need to figure out where I'm going to put it first! 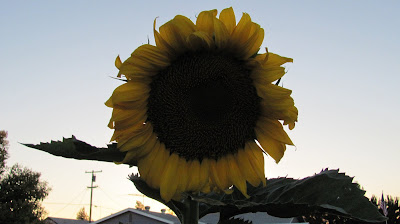 While Scott was working on the garage he stepped on a board with old rusty nails in it. I had just got back from the grocery store when I saw my phone ringing. It was him calling from the garage. He was telling me to bring a bunch of stuff out there  but I just grabbed a towel and went out to see the damage. I wasn't sure how I was going to find him. That's a scary feeling for sure. He was sitting there holding his bloody sock on the bottom of his foot. Apparently it was bleeding pretty bad for awhile but he had got it slowed down. I called Urgent Care to see about getting him a tetanus shot but they were closing and said he could come in tomorrow for one. He's being a big ass baby now. If it was me I'd take some pain pills and go to bed. It's things like this that remind me why I should never ever be a nurse. I'd be the mean nurse on the floor that everyone hated lol.
After trying to get it done all day I finally got a bookmark done. To make a bookmark you have to:
Find the picture you want to use
Try to print the picture out.
Realize that you are out of magenta ink.
Go to your mom's house and steal the magenta ink out of her printer.
Get home and realize that mom's magenta ink is ALSO empty.
Tell everyone that you are going to town.
Wait for teenager to take a shower so she can go to.
Sit in the passenger seat and hope you won't die while she drives, all the while praying that she doesn't hit anyone because you REALLY don't want another bill.
Make it to Staples alive.
Almost die going through the Staples/Target parking lot because that woman REALLY wanted that parking space she spotted.
Finally make it to the grocery store that's on the other side of the busy street.
Spent $120 on groceries.
Pray you don't die all the way home since the teenager is driving again.
Get home.
Start to unload groceries, get the call that the man stepped on the nail.
Take care of him and finally get him in the house.
Sit on the couch and watch America's Got Talent.
Make dinner.
Watch more of America's Got Talent.
Get back in the car and pray some more while the teen drives to her friend's party.
Drive back.
Finally get to use the computer (the man has been sitting there since the nail incident) to print out the picture you want.
Clean half of the bedroom to find the top of the desk.
FINALLY make bookmark. 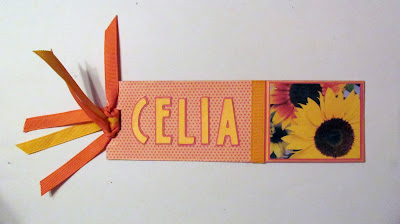 LOL...making that bookmark sounds like getting anything around here done. Probably why so much goes undone. :P

My sunflowers started blooming, too, but they are a smaller variety with many heads on one stalk.

Yeah..I had an empty house and got almost the entire thing done..AMAZING! Now I get to scrapbook today. I am hoping my headache will ease now the fam is gone again and the scream match of father/son is done. UGG! LOVE the garden..so jealous!! I am getting there. I am learning that if you go outside and "leave" the house chaos to pull weeds it kills to birds with one stone. Understanding the garden therapy thing. IF ONLY more time to do it. :O(

be encouraged by the thought that the recipient of the bookmark probably doesn't have anything this pretty and certainly nothing with her name on it! She'll love it! And it gets to travel to Bolivia :-)

I know! trust me! lol