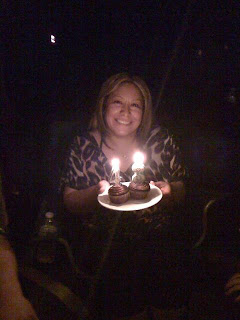 Remind me next time I decide to go somewhere that I know is going to have a lot of bad choices in food to eat before I go, ok?

This morning I weighed in over a pound heavier.
Yeah that would be the taco dip, tortilla chips and 2 cupcakes.

It took me all week to get back down to what I was last Sunday and then I messed it up again.

The party was ok. Not too many people showed up. Towards the end it ended up being about the same as her party last year.

I didn't drink since I'd had a lot of wine the night before.

Her cousin and his girl friend were letting their kids drink. I have a REALLY hard time with them letting the kids drink. I'm not just talking about a sip of beer but several beers and shots. The youngest is only 15 and he was drinking along with the others.

Do you think it's ok for kids to drink when they are at home with family and not going anywhere? I know some people think that's ok but I really don't like it.

Today we are going to another friend's house to swim and have a BBQ. She's a non carb dieter though so she'll have more healthy things to eat. Plus we'll be playing in the pool so that will burn some calories right?

I'm trying to decide if I should wear my old swimsuit that bags out in the ass but fits good everywhere else or my newer one I bought because that's all I could find at the end of summer last year when I couldn't find my other one. It's a bit big and kind of ugly but the ass doesn't bag out. Decisions decisions. Ah to have such hard things to think about, it's a rough life eh?

I totally understand your frustration!
I work out daily and if I could control my food I would weight like 100 pounds...right now, my working out is only helping me maintain my weight..I gotta decide to quit cheating and eating crap! :-)

I feel for you about the swimsuit! What did you end up wearing.. or ain't you decided yet? lol

Don't feel too bad about yourself and weight...it is better that you compensate for the indulgence. It is better than just gaining weight. I too am a foodie and am so hard on myself when I eat too much junk. Each day at a time. :)

Gosh, that is my every weekend at the cabin!

My parents were of the philosophy of letting us drink at home was better but funny thing, that never happened, except when we were officially 18.

Get this, I have a friend, 60 years old, who is doing an extreme of 500 calories a day to get into a TWO-PIECE swim suit. I say, "Give that idea up!" What do you think.

Good luck on your weight loss journey, it is a tough road, I know all too well. Been battling a very long time. I agree with Ashley, each day at a time.