How to tire out a 9 year old

Well camping was fun. I'm glad to be home though. Even though the truck is still loaded almost 24 hours after we got home and I went to work all day.

Why can't anything just put itself away? Life would be so much nicer that way.

So Saturday morning we left a few minutes ahead of schedule. I know! Amazing! We met up with our friends and then caravan-ed to Stockton to pick up Trevor who had spent a few nights with my brother.  (stop #1)

We stopped for Starbucks in Sacramento. (stop #2)

We stopped in Auburn area to go to the bathroom (and for someone to get candy bars and ice cream, not us of course) (stop #3)

We stopped in Tahoe City to get gas, go to the bathroom and to eat lunch. When we went into KFC we realized that three tour buses of people had also stopped. We left and tried a few more places and by the time we got to the place to eat that was farthest from the road there was no wait. We ended up eating at Bill's Rotisserie Chicken, which is really more of a Mexican restaurant. But they do have tri-top too, go figure. A little something for everyone. I got a tri-tip tostada (I thought the meat was gross and I picked it out), and Scott got a tri-tip plate. He thought his meat was great. I'd go back, I'd just order the chicken! (stop #4)

After that it was down the road until we stopped for ice (stop #5! Seriously! it's a 4 hour trip tops!)

Finally we got to our destination, Sugar Pine Point State Park.We've camped here several times. It's really beautiful. We pulled up and Scott decides we need to do a marathon unloading of the truck and trailer (we pulled a trailer with everyone's bikes). After four hours of driving (granted with stops) and a broken collar bone I'm thinking maybe we should take our time? But no, we must hurry hurry hurry and empty it right now. So all the kids pitched in and we got it emptied out pretty quick. The girls put up our tent and blew up the air mattresses so all I had to do was set up our beds and put the crap in the tent. Not too shabby.

Rusty was happy he had his chair. 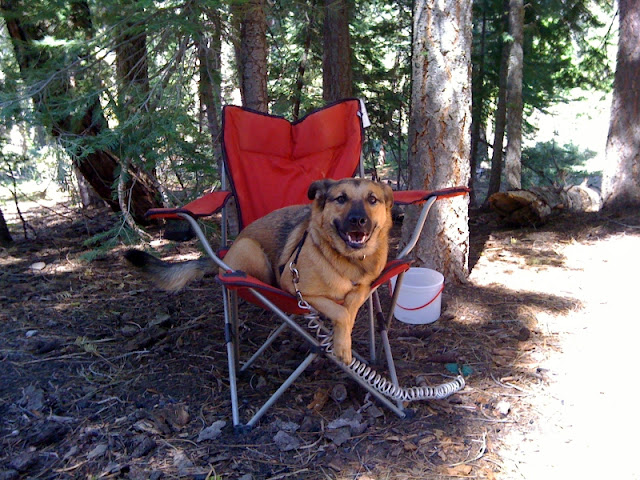 That night we had hamburgers for dinner. Remember Scott and I are on diets so we are still trying to be good. My friend made these hamburgers HUGE. I split mine in half with someone and wrapped it in lettuce and it was still huge. We had potato salad and macaroni salad and :burp: we were so full. I gave in and had a s'more or two also.

Sunday morning we got up and my friend made french toast for breakfast. About this time I threw my diet out the window for the rest of the trip. Yep. Sucks. But it's really hard to diet when someone else is making the food. It felt like I was being rude saying I couldn't or didn't want toe at something so I just ate it. And it was delicious. French toast and sausage. Yum!

After breakfast Trevor and I went for a hike. We took a trail that ended up being over three miles long. (the red trail) 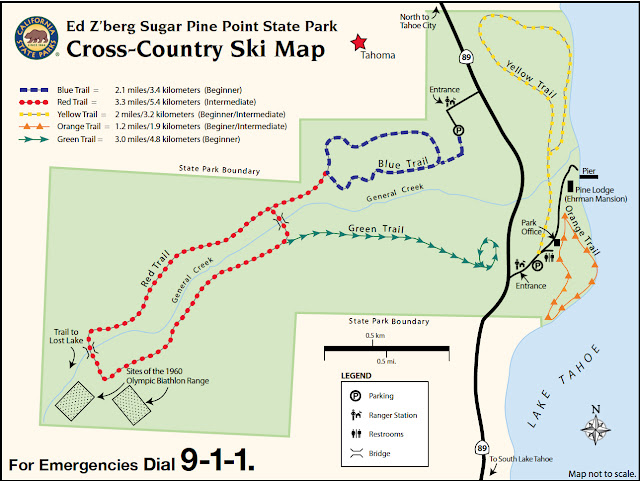 Trevor was good for the first half or so and then he was done. He was exhausted and if i could have called a helicopter in to rescue him I would have. 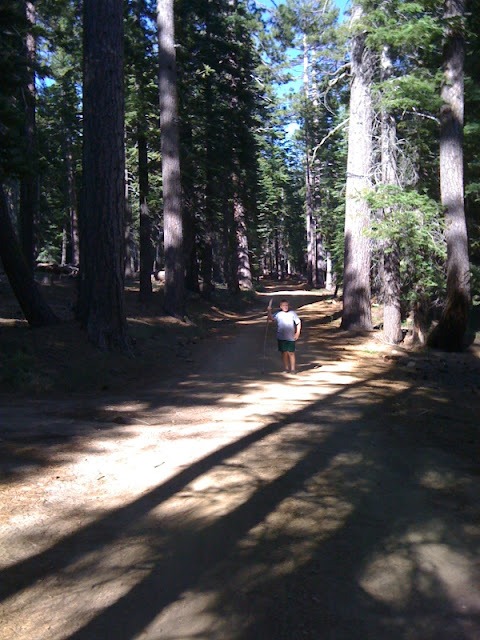 But, the only way out was to walk, so walk we did. I would walk and then wait for him to catch up, then walk, wait. It was a miserably long walk. 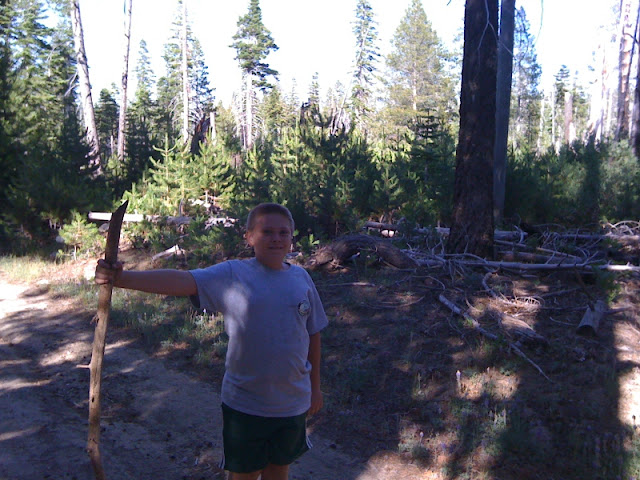 At one point we sat down on a log and I gave him a pep talk about telling himself he could do it and how once we were done he would feel so great about what he had accomplished. 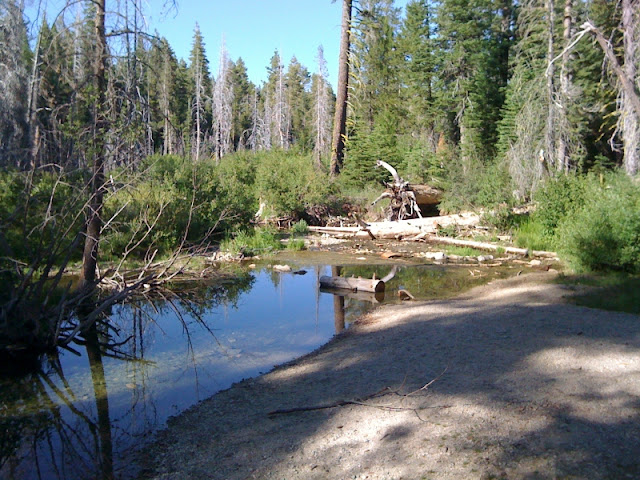 I think it didn't help much but I tried. 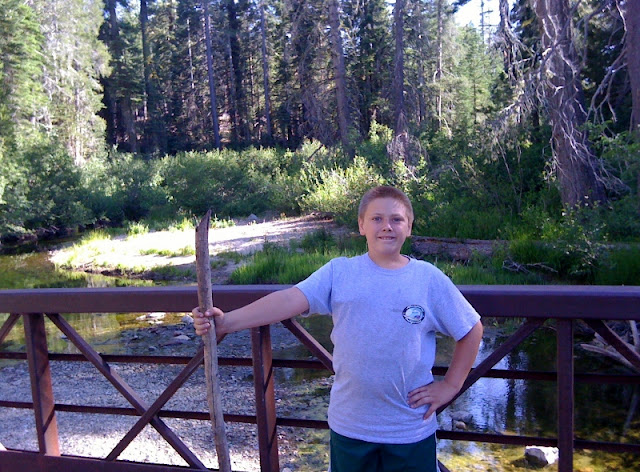 Over two hours later we were finally back at the campsite. 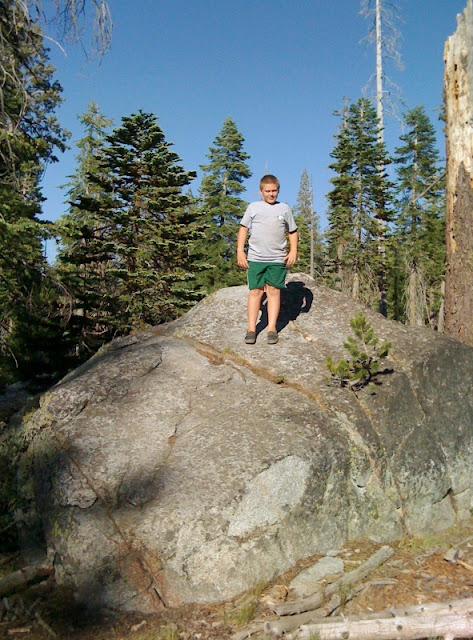 He was the proud owner of one blister.

After that I decided it was time for a drink. So I had a couple while the kids assembled the kabobs for dinner. Aren't they pretty? 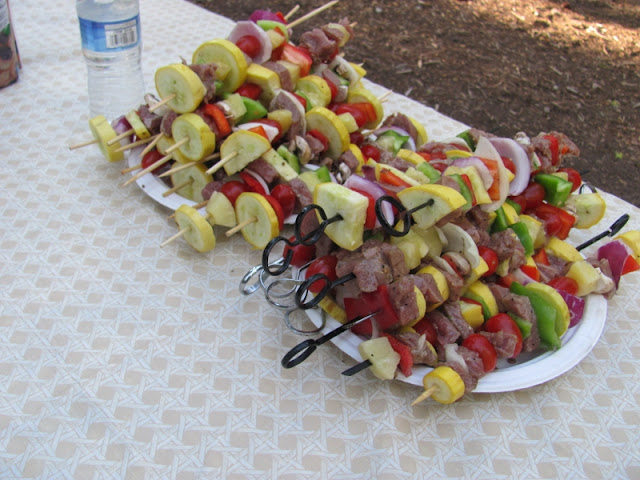 They were good but I should have brought more meat. I got ONE. And then all the veggies that everyone didn't want. And macaroni salad and pasta salad. I was so full after dinner I had to go lay down for a bit. I fell asleep for about an hour and missed out on the s'mores. Darn! Probably a good thing though!

That's enough for one post, I'll continue with our trip tomorrow!

Hmmm... maybe I could tire Griffin out like that too!
Your kabobs do look delicious.