Stick A Fork In Me

Well yesterday started off pretty good. Due to the holiday on the 4th they let us leave work two hours early (paid). I snuck off by myself and went and saw Magic Mike. Which, I thought, was kind of sad? I mean sure I enjoyed the eye candy but the general story seemed sad to me. What did you think?

I had put my phone on vibrate and stuck it in my purse. When the movie was over I had 10 missed calls from Jessica and a text to CALL HER! She was pulling into the bank and got hit by a car. I pretty much shook all the way to where she was and then proceeded to have a nervous breakdown on the sidewalk.

The car that hit her took off down the street, got to the light, people jumped out and ran and then the driver drove off. (but witnesses got pictures of his license plate and car while he was stopped). FanFuckingTastic. And to top it all off the cop that had showed up said it was her fault since she didn't yield to traffic when she turned. Even though the guy pulled out of a driveway and gunned it down the street and hit her. She never even saw him until after the impact. 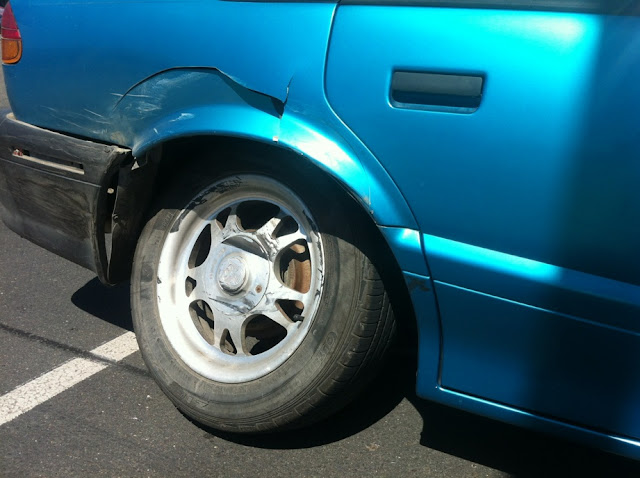 Luckily Scott says he thinks he can fix the car. Eventually it's just going to be an all new car from all the work & money we've put into it.

So now we are down to 2 cars instead of 4. Guess Jess and I should learn to drive the stick shift now.

I'm really hoping nothing else bad happens anytime soon. I really don't think I can handle it.Pin It
Posted by Julie H at 10:17 AM

Labels: car accident, losing my mind, Magic Mike, when it rains it pours

They say things happen in 3's eh?
So.. there's been two car accidents so far....

I don't agree with the cop at all.. it was not her fault!
Stupid MAN.

I hope she was OK, and is not feeling bad about it?

OH and did ya wear your new strapless swimsuit then????
PHOTO!!! lol

Oh Julie I'm sorry.
I've been having a shit storm too.

I am so glad Jessica is okay and didn't get hurt.
At least you have Scott who can fix the car cheaply.

Gee was Magic Mike worth it? :-)
I have a great dislike of matthew mcshirt off so I wouldn't pay to see it. I'll wait til it's on HBO or something.

Mercury is in retrograde starting next week that is when shit really hits the fan - be careful and aware. Not that you can do much about it.