Saturday after the run I went home and ate my weight for breakfast and then the kids and I went back to town to the Bean Festival.

I was kind of excited that my Dad had his truck there. Every time I go to a car show I'm always sad when he isn't there.

Here is his truck (55 Chevy Pick Up). I've actually never rode in it. He was telling me that it does not have power steering but it has a great turning radius with the smaller wheels on the front. I told him he owes me a ride. 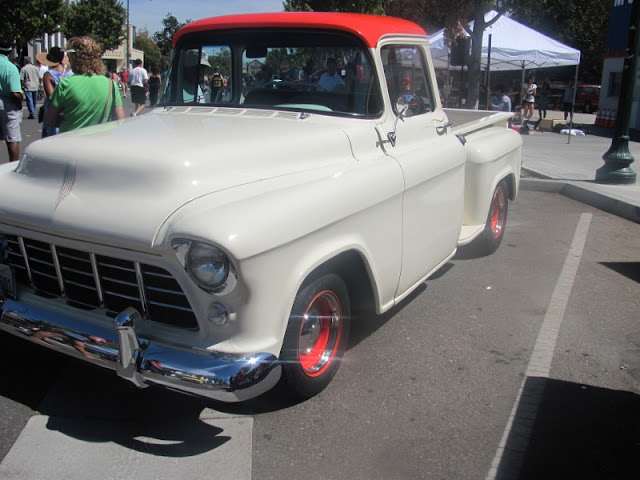 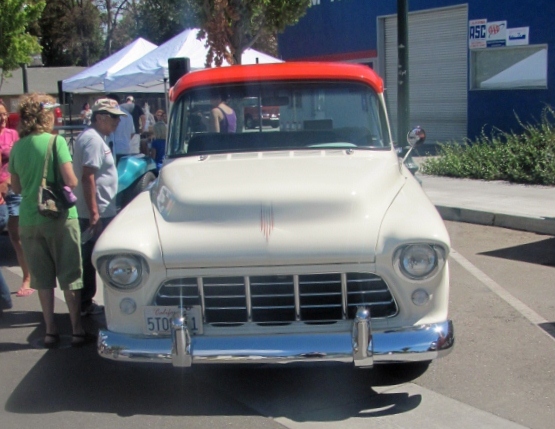 I was talking to my Dad and I was telling him that it was probably good for me to have learned to drive his old pick up that he used to have. It was probably an old Silverado or something, you know those old pick ups that everyone had in the 80's-90's. Not the fancy ones, the work ones. That old truck had a lot of "play" in the steering so you would have to turn the steering wheel about half way around every time you wanted to move just a bit to the right or left. He also had an old 55 Chevy car that he let me drive. One time I almost drove it into a ditch. I bet I gave him a freaking heart attack.

Back to the Bean Festival cars, here's a few more that I liked. 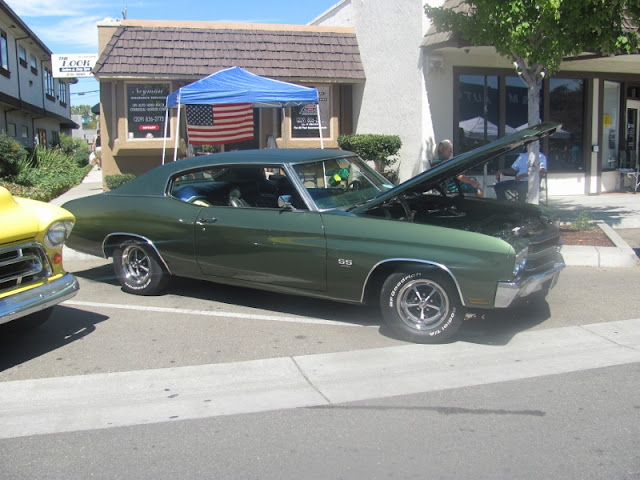 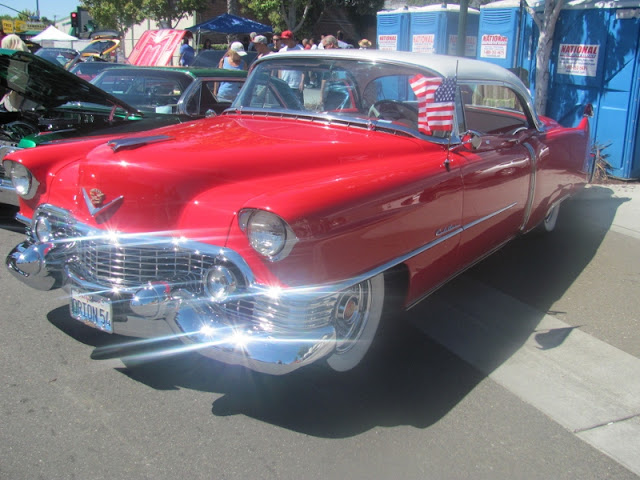 Morris Minor (My favorite, so cute!) 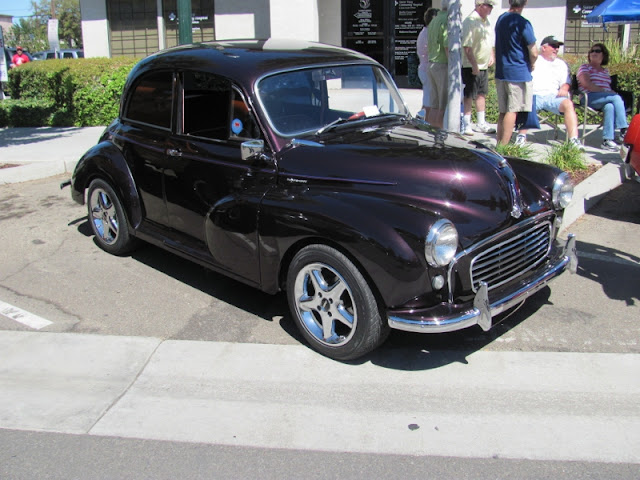 And for Scott, a really nice Mustang Fastback. 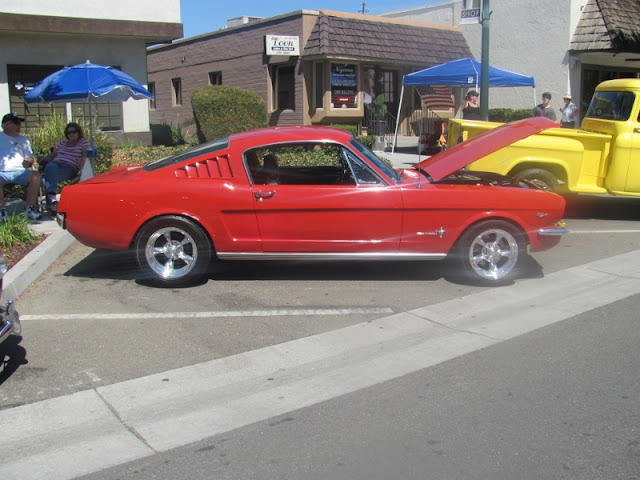 I actually didn't get any pictures of my Dad. I did however, get a picture of his brother (sadly they are estranged). This is Uncle Earl (not sure what's up with that beard, I asked him if I could braid it and he just laughed) who works down at the jewelry store. I went in to see if my ring was done, and it was! Size 8 1/2. Pretty sure my finger has never been that small. I have really large hands. My Mom says that the first thing my Grandma said when I was born was "look at the size of those hands".  Guess I can give up ever trying to be dainty. 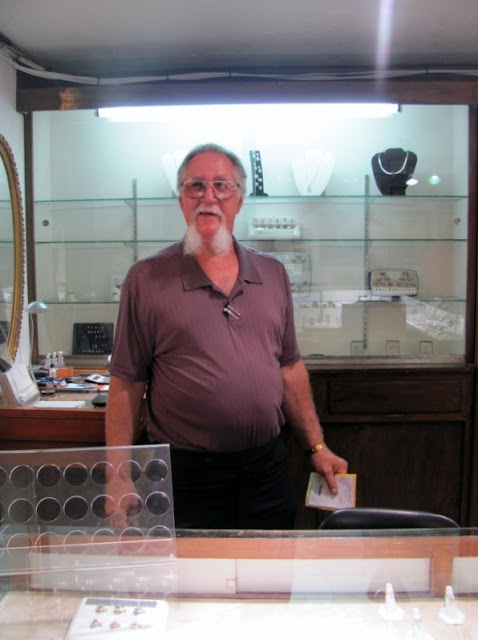 Whenever I think of Uncle Earl I think of when I was little. I used to spend a lot of time at his house with his wife "Aunt Judy". Uncle Earl worked rotating shifts at the glass plant so he was always coming or going at weird hours. If I was there when he got home he would always let me take off his cowboy boots (sounds kind of gross now). But it was so much fun to try and pull his boots off. Life was a whole lot simpler back in those days I think!

After I got my ring we walked around trying to decide what to eat. Melissa and I settled on a tri-tip sandwich from this Texas BBQ vendor. I had them cut it in half so we could share. 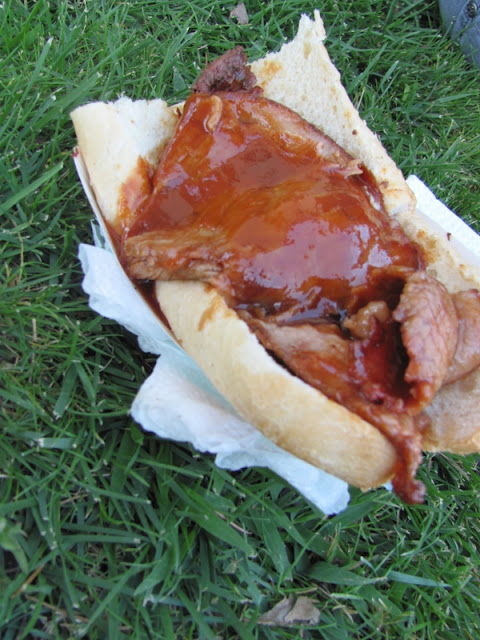 It turned out to be a bit too much BBQ sauce for her so she got some nachos. Look at the size of the nachos. The cheese was really spicy too. 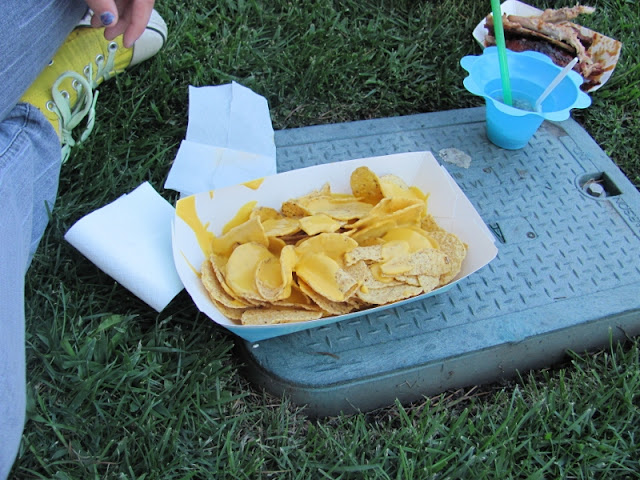 Trevor really wanted some ribs. Don't worry he didn't eat them all! He said they were really good. 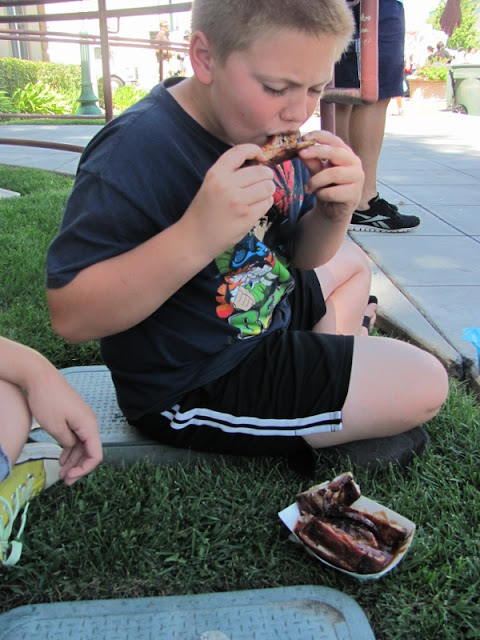 We sat on the lawn in front of the old fire house. I think they still use it. It was nice and shady and only a tiny bit wet. I can't believe how big my little girl is getting. Her little frog earrings glow in the dark. 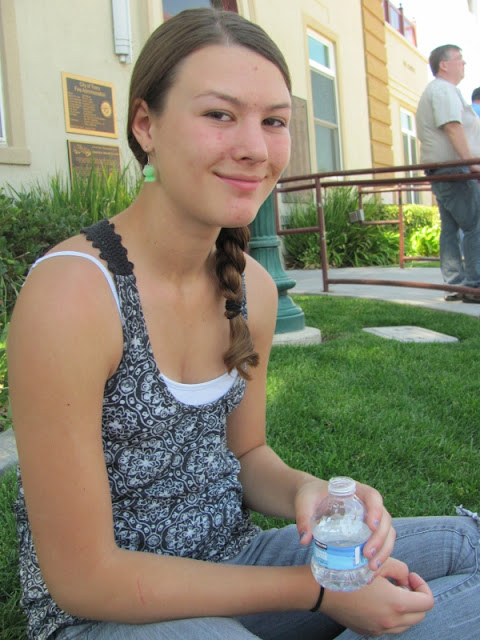 Trevor also had a shaved ice. 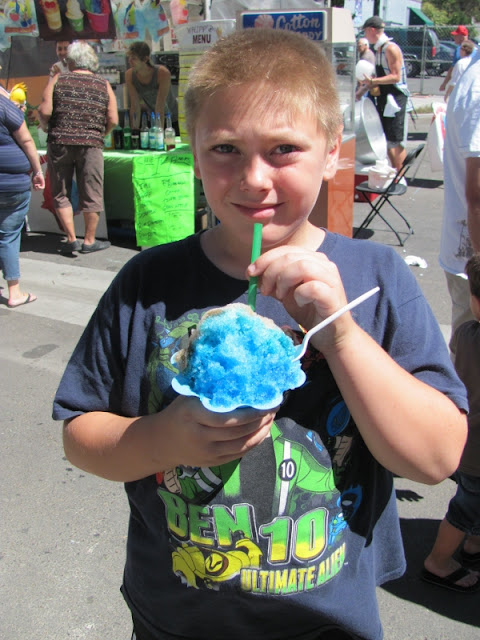 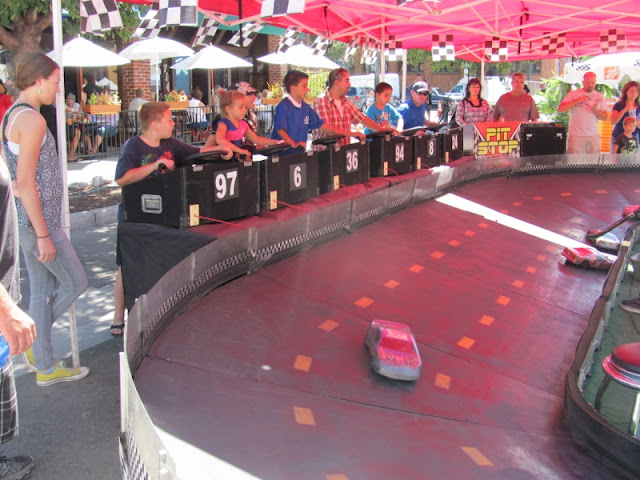 I didn't actually buy any beans (or anything but food really) but they had A LOT under this big tent. 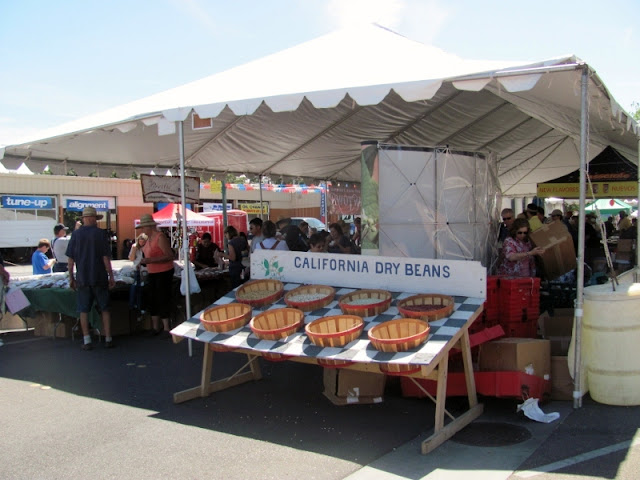 One of my aunts is on the Chamber of Commerce and they pretty much ran the whole Bean Festival. She was in charge of getting beans from a restaurant to the festival. She said she already had to shampoo the carpets in her car. GROSS. Remind me never to sign up for THAT.

Back when the Bean Festival first started it was ran by Rhodes Bean & Supply which is where my Step-Mom worked. She was put in charge of the Arts & Crafts. I remember going with her to the Asparagus Festival to help find vendors. She spent a lot of time and effort trying to find unique vendors. The arts and crafts were really something back then. Now? It's like the flea market. Boooo

My Dad was also in charge of the car show way back then. My Uncle Earl always brought his old Ford pick ups and my dad would have his car. It was set up in the Bank of America parking lot and we always sat in the same spot under a nice shade tree.

I was volunteered a couple times to help out in the Boys & Girl's booth to help sell T-shirts. The great thing about it was that I got a free t-shirt! (once again, oh the good old days eh?).

You also used to have to PAY to get into the festival. They would fence off downtown and you would have to pay or have ticket to go in. Later when I was older I worked at Tredways, which was part of downtown so I could just walk through the store to get in. That was nice!

Tromping around downtown always brings up so many old memories! Still a bit of that old town feel.

Labels: Car Show, Dad's Truck, Things to do in Tracy, Tracy Dry Bean Festival, Uncle Earl, When I was a kid

I have heard of a chili festival and a wine festival but never beans!!

My dad had a chevy truck like that. I even have a photo of him leaning on it.
I lost my virginity in a red mustang like that too! :-) TMI? tee hee