Ahhhh I'm so glad I have one more day off before I have to go back to work. Funny how when you take a little "vacation" you always need a day to recover from it.

We started off Saturday morning with a nice breakfast and then cleaned up the house a bit before taking off on our little adventure.

Heading north this time! We were on an adventure for Scott's first mountain bike race. It was just a bit too far to go to in the morning without having to get up really early so we made it a nice "date night in a hotel" trip.  I booked us a room at the Larkspur Landing in Roseville. There was all good reviews on this place and after staying a couple crap holes lately I figured it was worth spending a tiny bit more money for.

I thought it was going to have a microwave and a little fridge, instead it had almost a full kitchen! Just missing an oven. 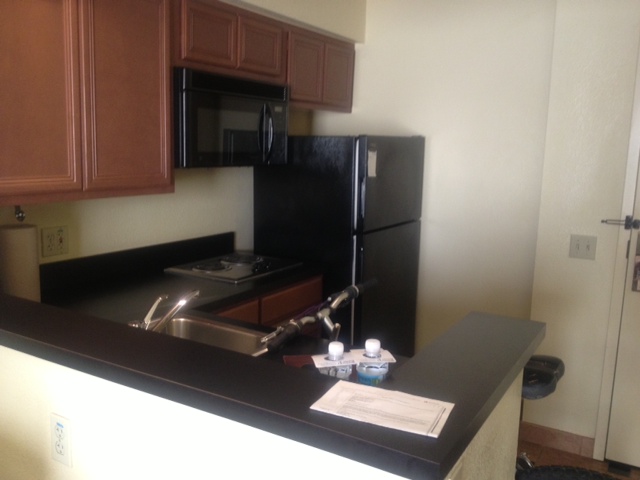 and a nice lounge chair and desk 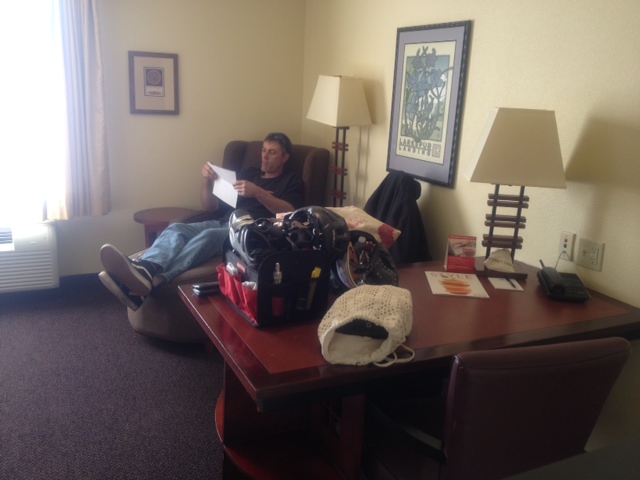 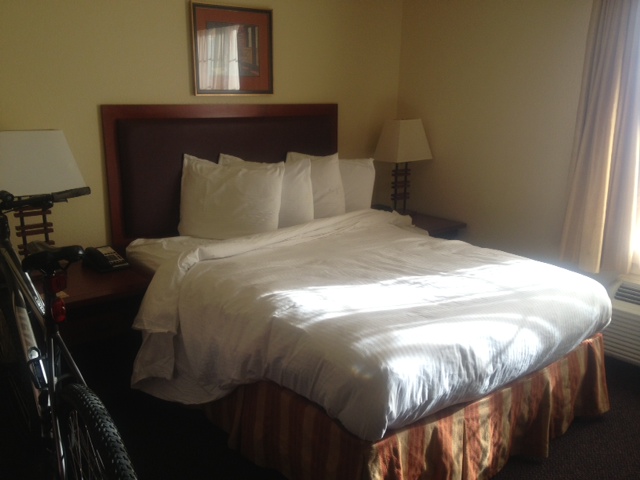 Nothing gross on the sheets at this place.

We relaxed for awhile and watched tv and then went down the hall to check out the gym. There was no one in there so we decided to go do a little work out before we went to dinner. 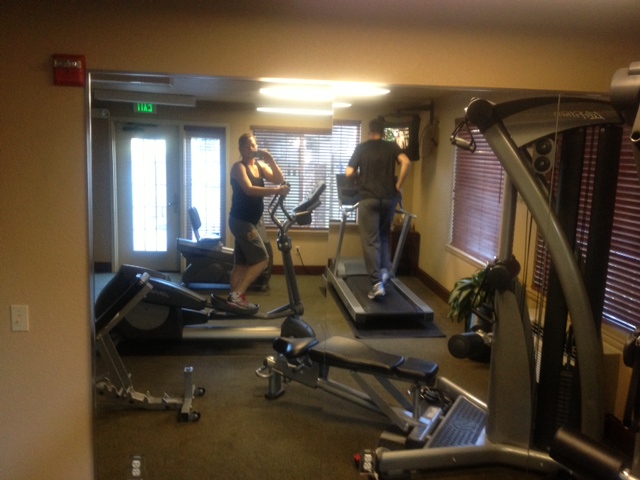 I was kind of cracking up to myself. Usually every time (in the past) that we would go somewhere on vacation we would never do anything but sit in the room and watch tv and go out to eat.

Who are these people??

We spent about 45 minutes or so in there and then went back to the room a bit. For dinner we just walked across the parking lot to Tahoe Joe's. We have one close by in Modesto but we've never been there.  It's decorated pretty cute inside with these huge tepee light fixtures, some stuffed "heads" (could do without those) and basic "Tahoe" type decor. (Although I'm pretty sure there are no moose in Tahoe)

We decided to get the meal for 2. For our appetizer we got the nachos. As soon as it came I was thinking that that was definitely a high calorie mistake. Oh well! Too late now. 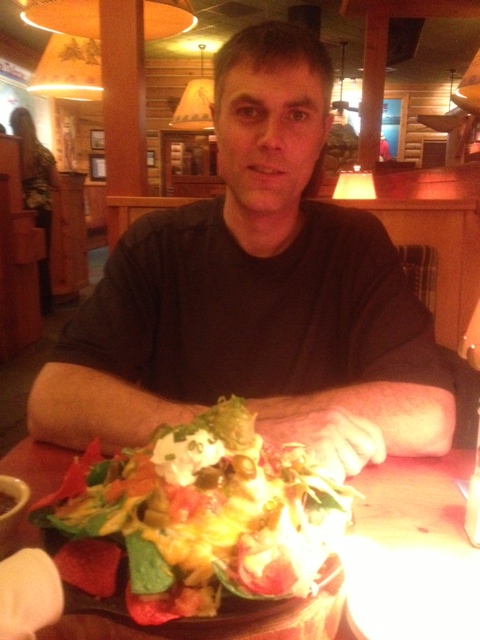 It was pretty yummy.

Then we had clam chowder, which came in a bowl instead of a cup and with some rolls. I couldn't even finish it I was already stuffed. 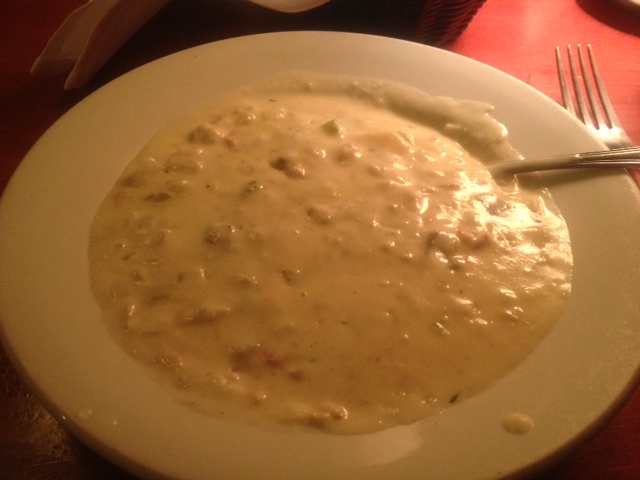 And then the main course of prime rib and a huge baked potato. I think I had about 5 bites and I was done. 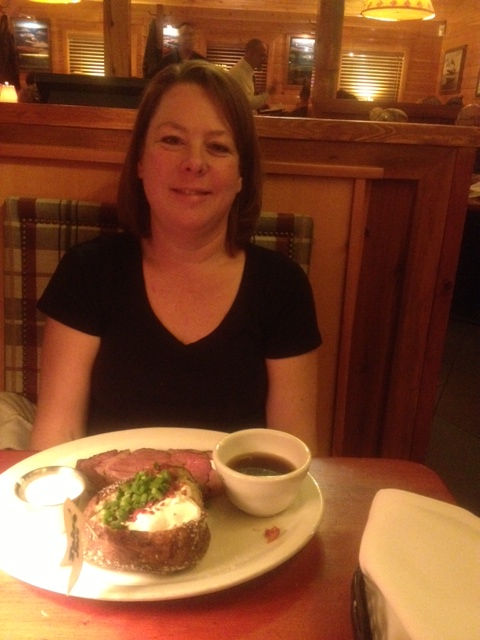 We got our dessert of a slice of cheesecake "to go" and I spent the rest of the night in a food coma.

We got up early and went down to the hotel lobby and had a continental breakfast. I had hard boiled eggs, string cheese, a banana and an apple. Scott loaded up on the carbs. Then we loaded the truck up and headed out to Folsom Lake where the mountain bike race was being held.

Scott got checked in, went for a little warm up ride and then we sat around waiting until it was finally time to start. 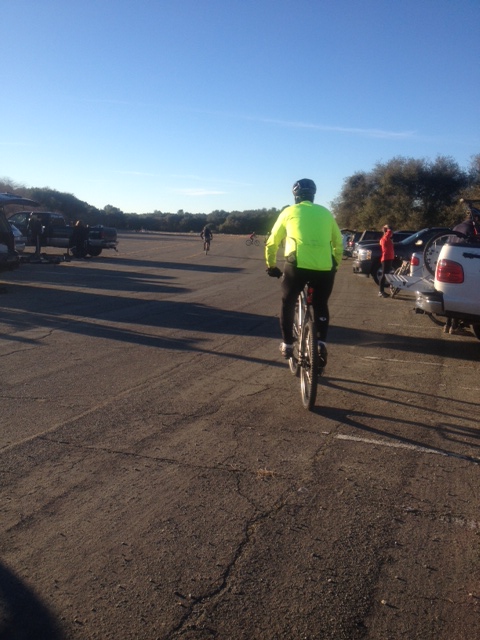 I'll let you read Scott's story about his ride over here and just give you "my time".

While Scott was out on his ride I kind of walked back and forth at the start finish line. I wasn't sure how long it was going to take so I didn't want to go "too far". I wanted to be close by so I could get a picture or two of him on the home stretch.

This kind of cracked me up. Do you think she saw the sign? 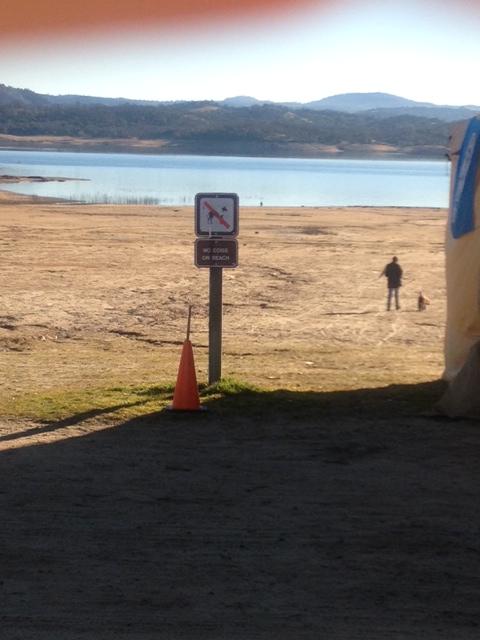 I've never been to Folsom Lake before but it's always on the news when its' super hot. People flock to the area for boating and swimming. It was a bit to cold for swimming today! The water was pretty low too. 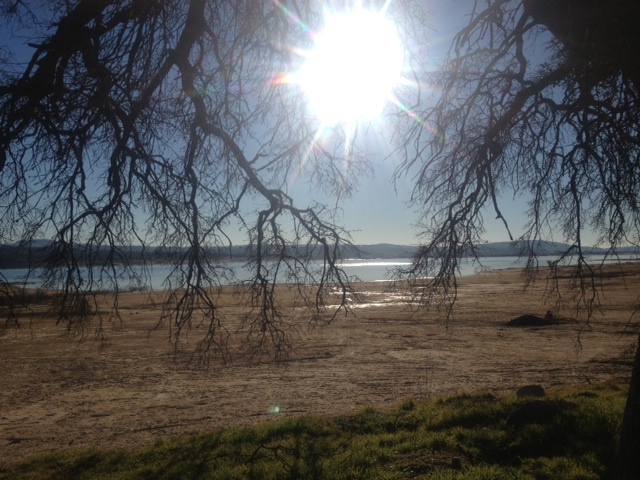 It would be a nice place to go hang out for the day if it was just a little bit closer or maybe if you camped there. Although I didn't see what the camping area looked like.

I was lucky enough to get a shot of Scott coming in. 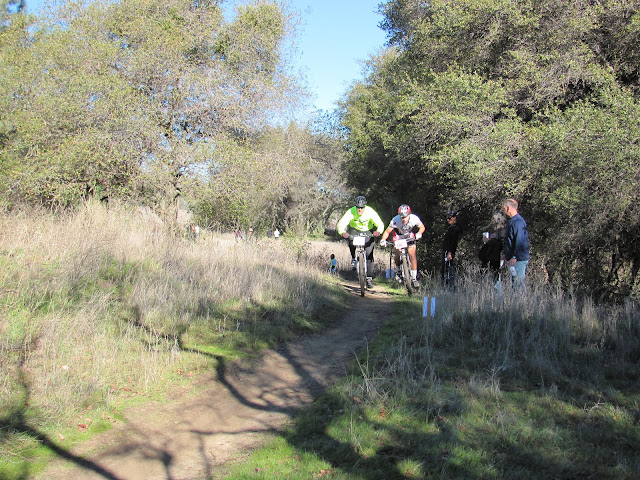 It amazes me how many people walk on the bike trail when they can see a bike coming. HELLO walk on the side!!

Scott was pretty tired when he came in but he let me snap a picture of him before we loaded up. 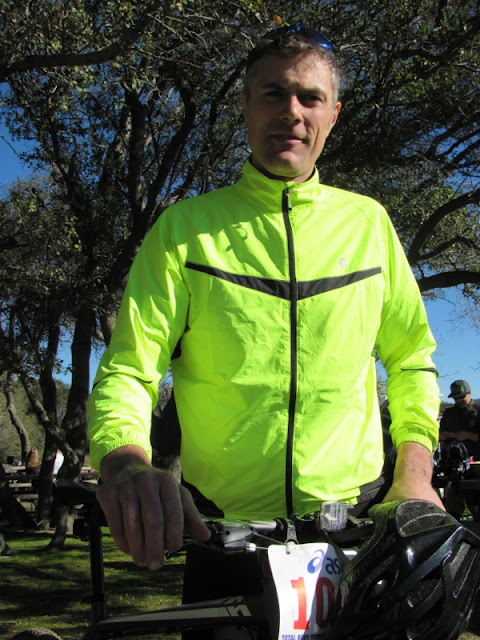 So proud of him getting out there and being active!! Look at all the adventures we have had in just the past few months. Much more fun than sitting on the couch every weekend feeling sorry for ourselves that we are fat and out of shape. Fixed that didn't we? It's not always easy and sometimes we are really hard on ourselves but in the end we are winning every day we go out the door and take back our lives.

On the way home we stopped for lunch at this Mexican restaurant called "Vallarta" There was one larger table of people, us and 2 other couples there. It took about 1/2 an hour to get our taco salads that we ordered. It felt like forever. They only gave us one basket of chips too. I'm so spoiled by our local places that just keep them coming. Maybe it's a good thing they only filled it once though haha. 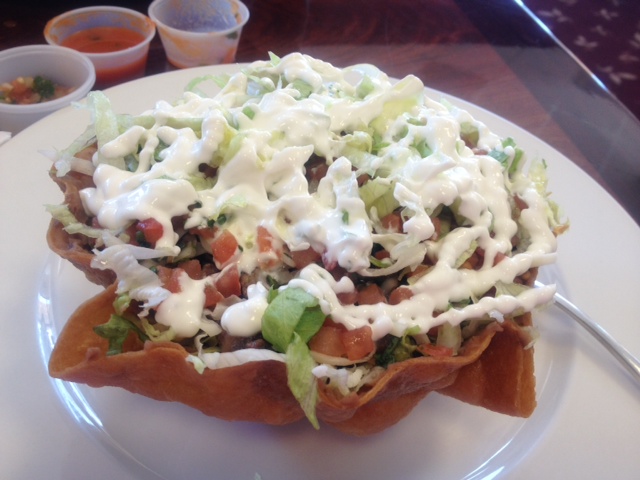 The food was pretty good, just could have used a bit more kick to it (we added some pico de gallo out of the salsa bar to ours). I'd give them a B- on my Mexican Food scale :wink:

Next door to the restaurant was a bike shop so we decided to go in there to see if Scott could get his bicycle spoke fixed. They were able to fix it in 1/2 an hour (wish we would have went in there first before lunch!) which was great. Now he didn't have to worry about his wheels to get to work tomorrow. (Sadly he doesn't have the day off).

After we got home I was sitting around feeling all bloated and gross from lunch. I had worn my running stuff in the morning thinking maybe we would have time to run around Folsom Lake a bit but he was too tired when he was done. I was laying on the couch and finally talked myself into going for my 5 mile run I wanted to get done this week.  I stopped 3 times. 2 times to take off a layer of clothing and the last one to breathe a bit because I got a huge side cramp.

The plus side to stopping for a minute is you can snap a picture. 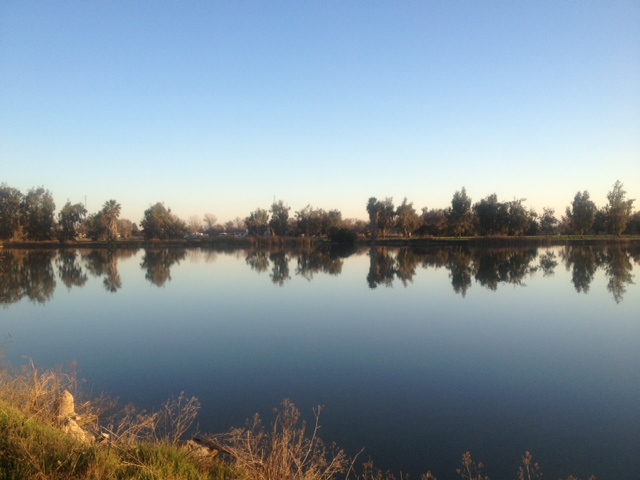 Hopefully I'll be able to run my 10k next Saturday without stopping.

Here is my run with 5 minutes walking warm up and about 2 minutes cool down walking. 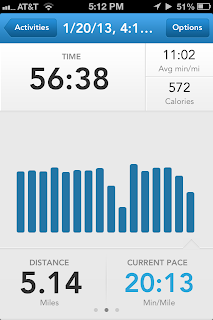 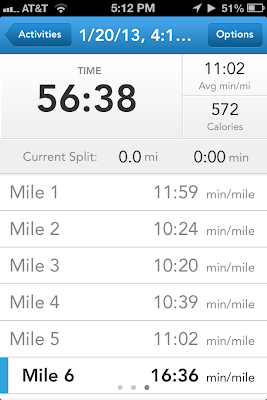 I seem to be pretty consistent with the 10 1/2 minute pace now. 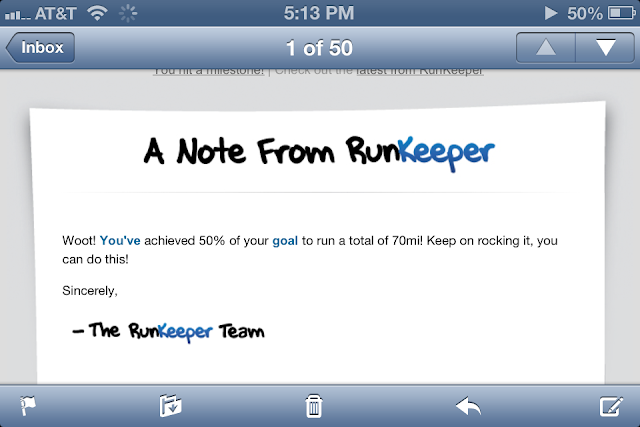 Well hopefully you all have a holiday tomorrow like I do! We are the lucky ones to have a job AND get the day off. Not everyone is so lucky!

Looks like a fun weekend...and right near my neck of the woods! You are doing so great with your health and you look fantastic!

Holy cow, excuse me while I wipe the drool off my computer. All that food looks like it was AMAZING!

Like Krysten above... *drool*!
Looks like a lovely place, and that photo you took of the lake... gorgeous!
Scott is looking mighty fine too... has he lost a lot of weight too?