The other day the back of my leg was kind of sore so I went over to the mirror in my room to check it out. I was like HOLY CRAP!!  I walked over to Scott and was like hey check out my leg!! 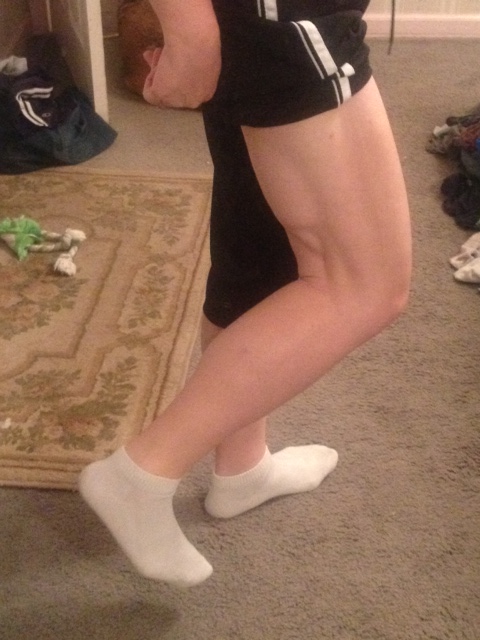 He told me maybe that was a sign that I exercise too much. Hahahaha funny guy.

Friday night I went to get my hair done again by my sister in law at the beauty college. Melissa wanted to go too so we made it a date. It's in Stockton, which is where my Mom lives and just a coincidence, Trevor asked if he could go over there to spend the night. It worked out good because I could take him before our hair appointments.

My Mom has this young man that used to come wash her car and mow the lawn and stuff when he was younger. He had moved to LA for awhile, but came back and had this little dog. He's staying with his Grandma and she said he had to get rid of the dog so most likely knowing that my Mom would take it he took it to her house first. 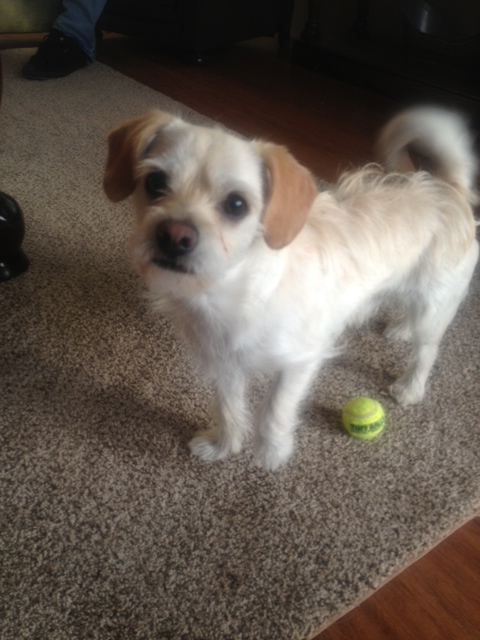 This is Buddy. He's super cute!! If I had a fence I'd take him but I already have to hold the leash while Rusty goes poop and one of those is enough for me. Mom took him to Petfinder's and I guess they took pictures and put him on their website but I'm pretty sure he's just my Mom's new dog haha. Today she was buying him a little harness and collar.

Back to the hair! My sister in law did a FAB job on my hair. I think the only time she asked the instructor anything was to double check how long she should leave it on my hair. She did it really fast and while she was working on mine random people would come up and ask her questions. I'd say that's a sign she's doing really well! 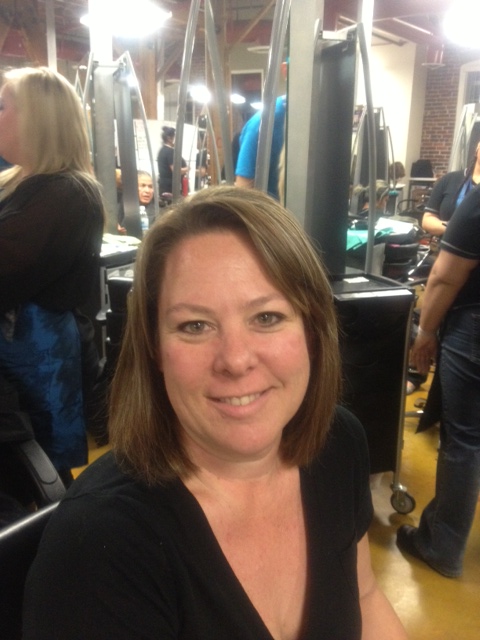 I really need to start wearing some lip stick I think. It's just so icky.

Melissa has TONS of hair. They had two people work on her hair.  It actually turned into four people since the guy there had to leave to take care of a client and then another girl came over for awhile and also the instructor came over and did a bit too. 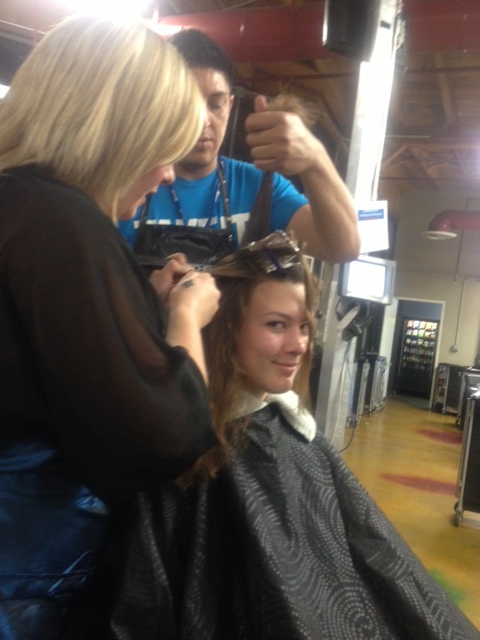 It took a long time after I was done for her to get done so I moved over to the waiting area. This woman was sitting there and I noticed she was sleeping. (I don't know why the floor is red there, I'm hoping it's old paint). Eventually she started snoring and then kind of woke herself up. Totally cracked me up since I've been known to fall asleep in movie theaters and such. Sucks being so tired haha. 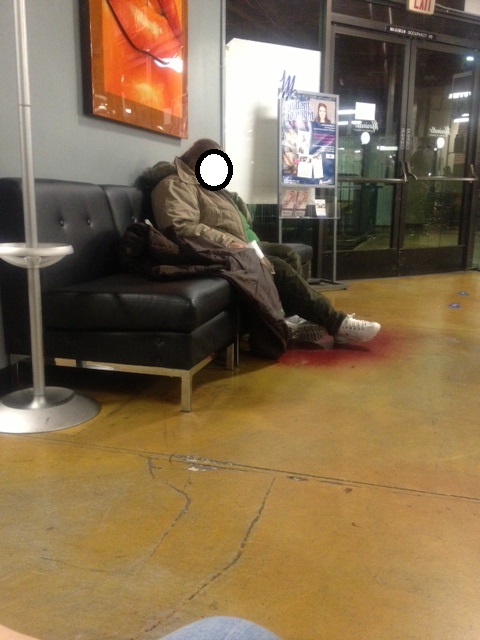 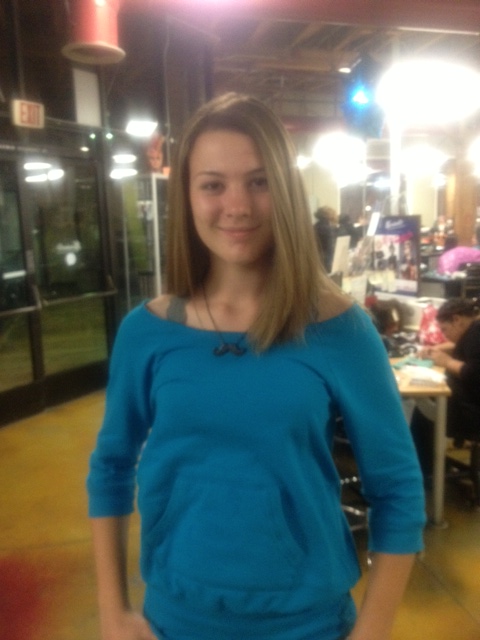 And a blurry pic of the two of us. Yes my 13 year old is taller than me. Once Trevor passes me up I'll be the short one in the house. 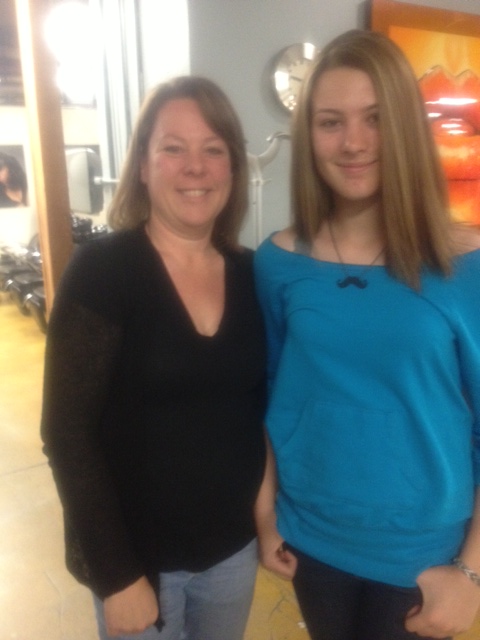 Afterwards since we were right down the street, we went to one of my old time favorite restaurants Cancun. I have went to this restaurant back before I can remember. My Mom used to work across the street from it when I was little and then later we'd go meet her old work friend there. Eventually they tore down the old building to build a new movie theater and shopping area and it moved to a new fancy building around the corner. Their food is really really good and I've been to about a million Mexican restaurants so I'm a pretty good judge ;) 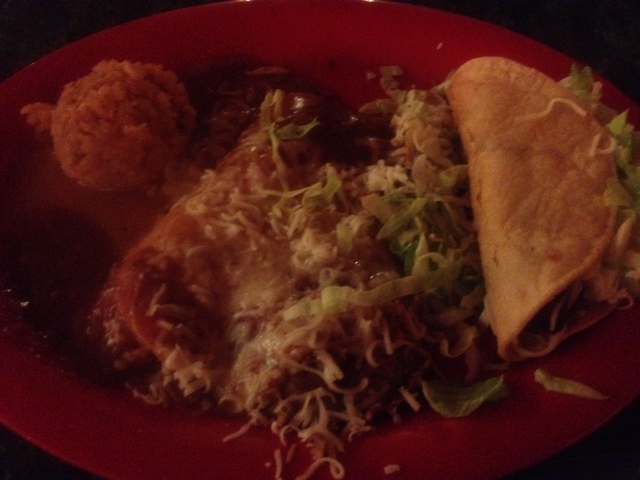 Quite the meal to eat at 10:00 at night but we didn't eat dinner before we went to get our hair done and I'm pretty sure my insides were starting to eat themselves.

Needless to say we didn't worry about what the scale said Saturday morning!

Saturday we went for our bike ride.

Saturday night we went over to my brother's to pick up Trevor and have the first BBQ of the year!! Man I've missed our BBQ's! My brother Joe and Megs didn't come over til after dinner since they went out to celebrate their anniversary. It was also kind of sad without Jess there :(

Ava had her hair up in her first pony tail. Isn't it cute? 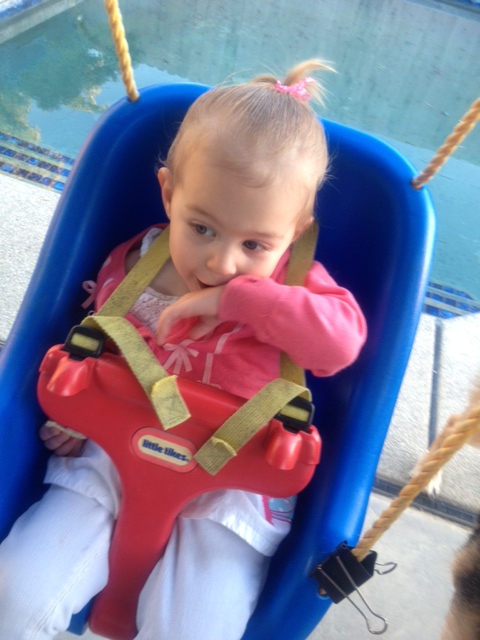 She's such a good little girl. Notice how she's wearing white pants? Worked great for sitting in the flower bed playing in the dirt haha. Gotta love little ones!

We stayed until pretty late and had to stop half way home to get some coffee so Scott could stay awake to drive the rest of the way home. I would have drove but I was nodding off myself!

Sunday morning we slept in a bit and then Scott made us breakfast. Then we went out for a run. We started off at a pretty fast pace and I was thinking I should ask him if he knows how fast we are going? But he had his Runkeeper going so I figured he did. Well about mile 2 he started having a hard time and by the time we got back to the house he was having a hard time breathing. I was hoping I didn't kill him! I had to hurry and go meet my Mom to go pick up Trevor and you know how your mind gets working? I sent Melissa a message to go check on her Dad! He was fine though just watching TV. I think we need to work on pace a bit next time!

Oh check out this cute little mouse at Petsmart. 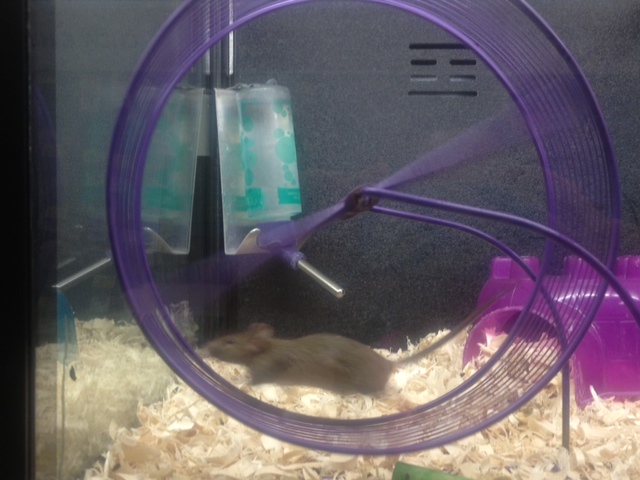 It was just running it's little heart out. I told Trevor we have those for free sometimes. Gross. Gotta love living in the country.

Which, I do when I see fields like this on my ride home from town. 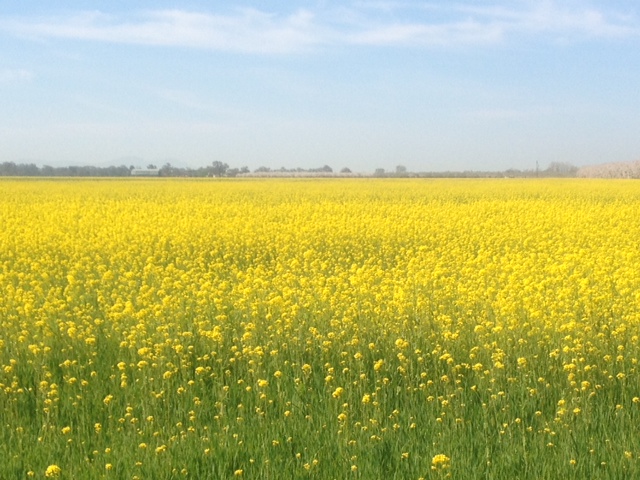 I came home and attempted to give Rusty a bath. It was nice out but I should have done it in the bathtub instead of with the house. He was NOT HAPPY. My finger is almost recovered from when he jumped on me and jammed it. OUCH! After he was dry I put on the flea meds I bought for him and Lucy and re-dosed Buster. Hopefully this will get rid of the fleas. The poor animals have been miserable lately.

My feet got a bit wet when I was washing the dog so I was changing my shoes to work in the yard.

Disgusting. This is where I get blisters when I run longer distances (I keep trying different socks and now I usually put vaseline on that spot too.) It's peeling off nicely. HORK. 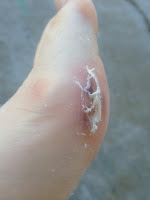 I worked in the yard for about three hours. It's looking a bit better but I still have a long way to go. It got totally neglected last year when I was working full time after Scott's car accident. At least I have a lot of empty places to plant some new stuff now! 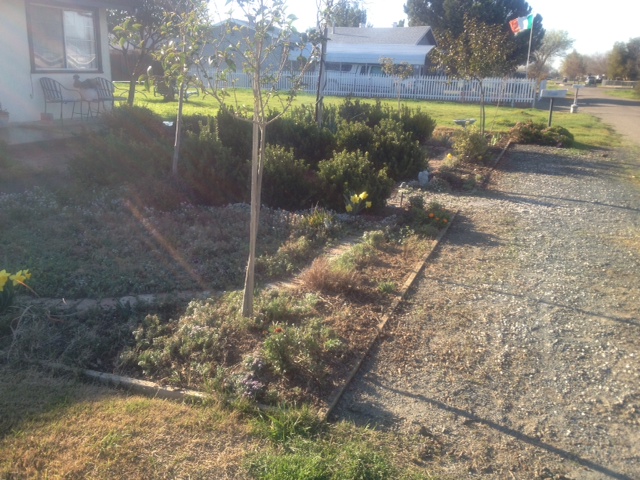 I hate when Easter is in March because the gardens haven't had time to bloom out to their full potential. 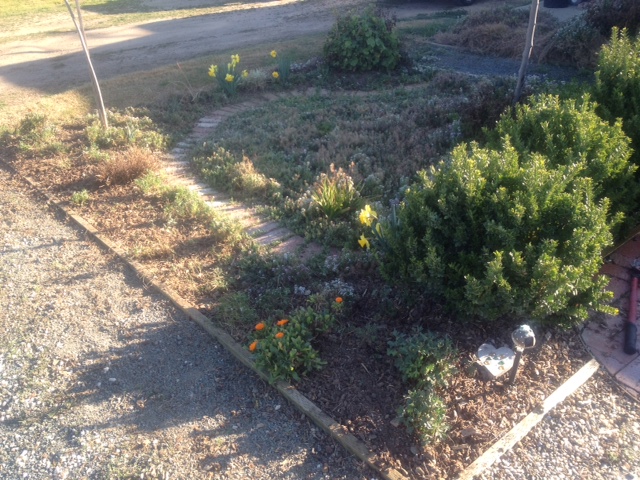 Well I should go to bed. Tomorrow morning is going to be a bitch. I don't think I'm even going to attempt to get the kids to the bus by 7:00 which would be like 6:00 yesterday. We need a couple days to ease into that! 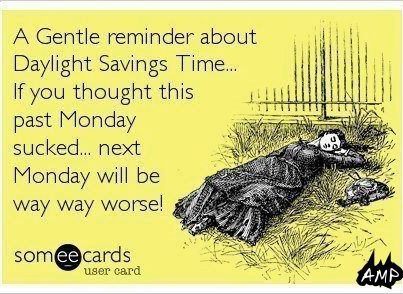 We watched some friends our ours dogs and didn't realize they had fleas (our dogs do not) and had the worst time getting rid of them. They were so bad you would be laying in bed and a flea would jump on you.....ICK!!!! My aunt who has 4 dogs (two of them being mastiffs) recommended Comfortis. It is a pill form (like heart worm medicine) and gets rid of them so quickly. We also had to bomb our house to get them out of the carpet but since then (it has been probably 2 or 3 years) we have only seen fleas on them 1 other time and gave them the Comfortis again and they cleared up within a day. It is kind of pricey but so worth it!!