I've typed about 12 rants but everyone reads my blog (but no one comments) so yeah, I can't post any of that stuff. I'm kind of thinking about making my blog private. Or making a new secret blog. Where I can let it all out like the good old days. But I really do like my little blog here. But I feel like I have to be all PC and not hurt anyone's feelings or you know, get fired (or divorced). Hmm what a dilemma. Maybe I'll be like Chris and have a secret on the side blog for the juicy stuff...

I feel like I've gotten boring (by the lack of comments) and I'm just a diary of the nice stuff. What do you think I should do?

So in today's fun we missed the bus. I have been taking Melissa down to the bus stop (high school bus comes at 6:53 ish and then going home real quick to finish getting mine and Trevor's shit together and then we hop in the car about 7:05 and head back down to the bus stop (it's amazing how much can get done in 10 minutes).

Today we get around the bend where I can see the bus situation and the bus is already on it's way out. WHAT THE HELL! The official bus time is 7:15 and it's only 7:07. Trevor says maybe we can just go to the next bus stop? So instead of trying to flag the bus down I said ok, lets do that. So we follow the bus down to the next stop and when it stops he hops out and goes up the bus and gets on (but no kids at that stop, maybe because they are early?) So he's on the bus and I just go to work.

When I got to work I emailed the principal of the school to ask if he knew that the bus was coming that early and do we have a new time? Which he says he just talked to the bus in charge woman and they are changing the time and will be sending home papers today. I thanked him for responding and told him next time it would be nice to know that the schedule was changing before we missed the bus.

When Trevor got home from school he said the bus driver told him that next time he goes to the next stop she won't let him on and he won't be able to ride the bus anymore and that we were holding up traffic. Hmmm I see another email to the principal. In all the years that my kids have been going to this school and riding the bus we've went to another stop TWO TIMES. In ALL the years, so it's not like it happens all the time and what's the big deal? (both times it was because they came super early) She was already stopped and that one car behind me was totally having to stop anyways. Any why are they telling this all to my kid and not sending a note home for me?

School shit just chaps my hide sometimes. It's like people get a little power and it's BOOM straight to their head. 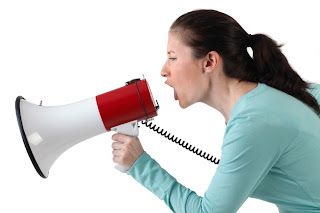 I guess that's everywhere though eh?

In other news I went out for my 3 mile run tonight by myself because Scott said he's not going to do anymore training for the half marathon and he's just going to "wing it". I'm sad that he feels that way but I do like running by myself. I don't have to try to keep up with anyone, slow down for anyone or worry about if they are mad that I did or didn't do any of those. I can just go out and do my thing. It's kind of nice. But I'm still sad that he isn't going to run anymore. Maybe he'll change his mind after a few days.

So leave me a comment on if you if think I should do a private blog and if you'd read it. Or if I should just stop being PC and put it all out here like the good ole days ;)

I like it when people are funny and honest. Be yourself and vent.. I hate fake people and reading only the good stuff.. every one has junk in their life and we can all relate!

Thanks for keeping it real.. love reading your blog.. always entertaining!

Let it all out sister. If a person does not like what you have written then they can just close the browser window and move on. Some people today get so butt hurt over the smallest of things. As for comments Im kind of a shy person. Hell I used a pen name for my own blog. But I check to read yours every day cause it is so fun to read. So keep on venting and being honest.

Be yoruself! If it offends someone they don't have to read.
Fyi- I don't comment beacuse I haven't figured out how until now. :)

I love your blog! Just be yourself!

You KNOW I love your blog! Stop being politically correct...it is your blog and you can write whatever you want! Your choice - but who cares what anyone else thinks!?!
I have to run alone...it is nice that you guys did that together for awhile but I really enjoy my alone time running. Thats just me! I also considered the private thing and just decided screw that and kept it public! Your choice!

You are NOT boring Chick! I'm so sorry I've been so slack with comments lately, but you know how busy my life gets eh?

I'm doing my best to catch up with your blog and life.

Having a private blog works really well for me... I totally recommend it.

I love reading your blog and I would miss it! When is your half marathon?