My busiest day of the weekend was Friday night.


After my frozen pizza was done I went over to my mom's place for a bit. She had Robert and Adrian so my two wanted to go and visit with them. The kids and I all played a game of Frozen UNO so that was fun.


I had made a date with Scott to go down to the bar at 10:00 (yes pm) since it was the last day of the month and I needed to pay my (our) bar tab. So at 10 I took the kids home and then picked him up and we went and paid our tab and had a couple drinks.


Saturday I spent most of the day on my Etsy store. Last weekend I went to a big garage sale they had at our little church and bought a milk crate of books for $2. When I was going through them I found this one. Hmm looks old! 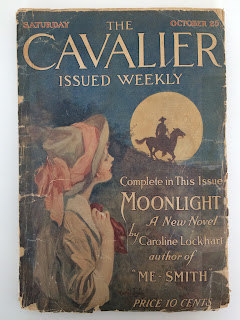 Since I couldn't find anything EXACTLY like it I put it on eBay instead and it got the minimum bid of $25 in just a couple hours. Nice! Hopefully it will get some more and the people pay lol.

After that I was just kind of messing around cleaning some stuff up in my room (and putting clean clothes away) and my friend Traci called and told me to come over to hang out with her and Nancy on her porch. So I went over there and we played a round of this card game called Dirty Minds, which was really funny!

I had made a date with Trevor to do the fire pit at 8:30 though so I had to come back home. He had mowed the whole back yard by himself the day before and set up the fire pit but it was too windy. So Saturday night we HAD to make s'mores and do the fire. 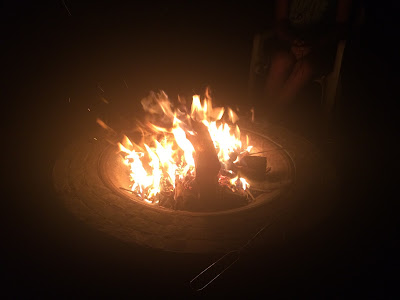 This gal Cassie who was a bartender at the little bar was bored so I told her to stop by if she wanted so she did and hung out with us in the back yard. She said I was the first person to invite her to come over since she had lived here (a couple years I think!) She is the same age as me and has 3 grown/late teen daughters so she is fun to hangout with.

At one point on Saturday my aunt had said something on Facebook about working on unfinished projects and that got me thinking about a drawer in my closet. So Sunday I pulled everything out of it and then the two little drawers that just had misc junk in them. I found all the Girl Scout badges that were in there and the girls vests that I needed to finish up. My old shirt I used for myself when I was a leader was in there too. So I got all the loose badges sewn on all our stuff.

Melissa's Daisy vest (I didn't even know I needed to sew anything on this but I put my hand in the pocket and found the petals. 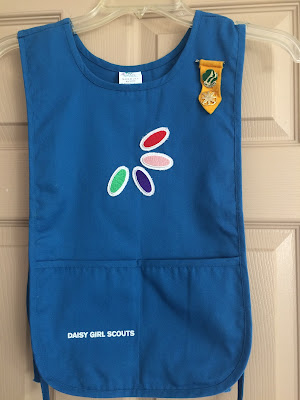 These were already sewn on the back 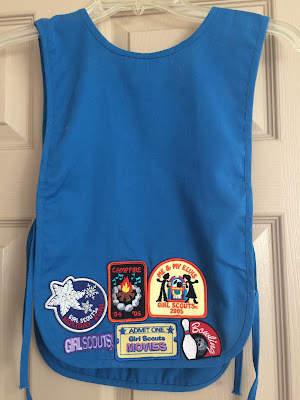 Melissa's Brownie vest, she quit after she was done with Brownies. Too much forced "friendships" for her I think lol. Plus one of the leader's (an assistant) was a nut job. She used to drive me batty just listening to her.

They did do a LOT of badges though. I had to put on most of the triangle ones. They were mostly iron on but the iron on badges always end up falling off so I just sewed them on. 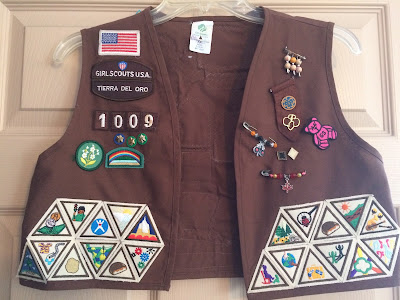 I put on about half of these on the back 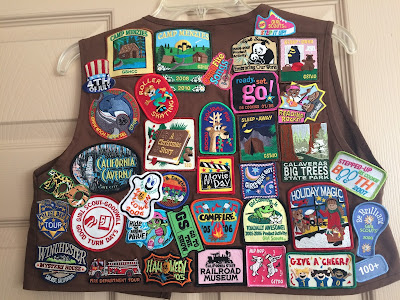 Then Jessica's Juniors vest. I didn't have to put anything on the front 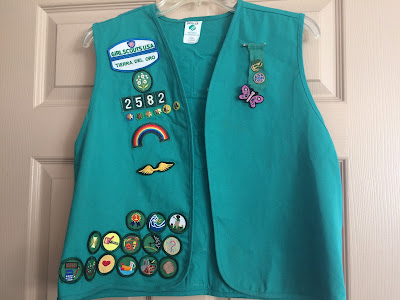 but put on about half on the back 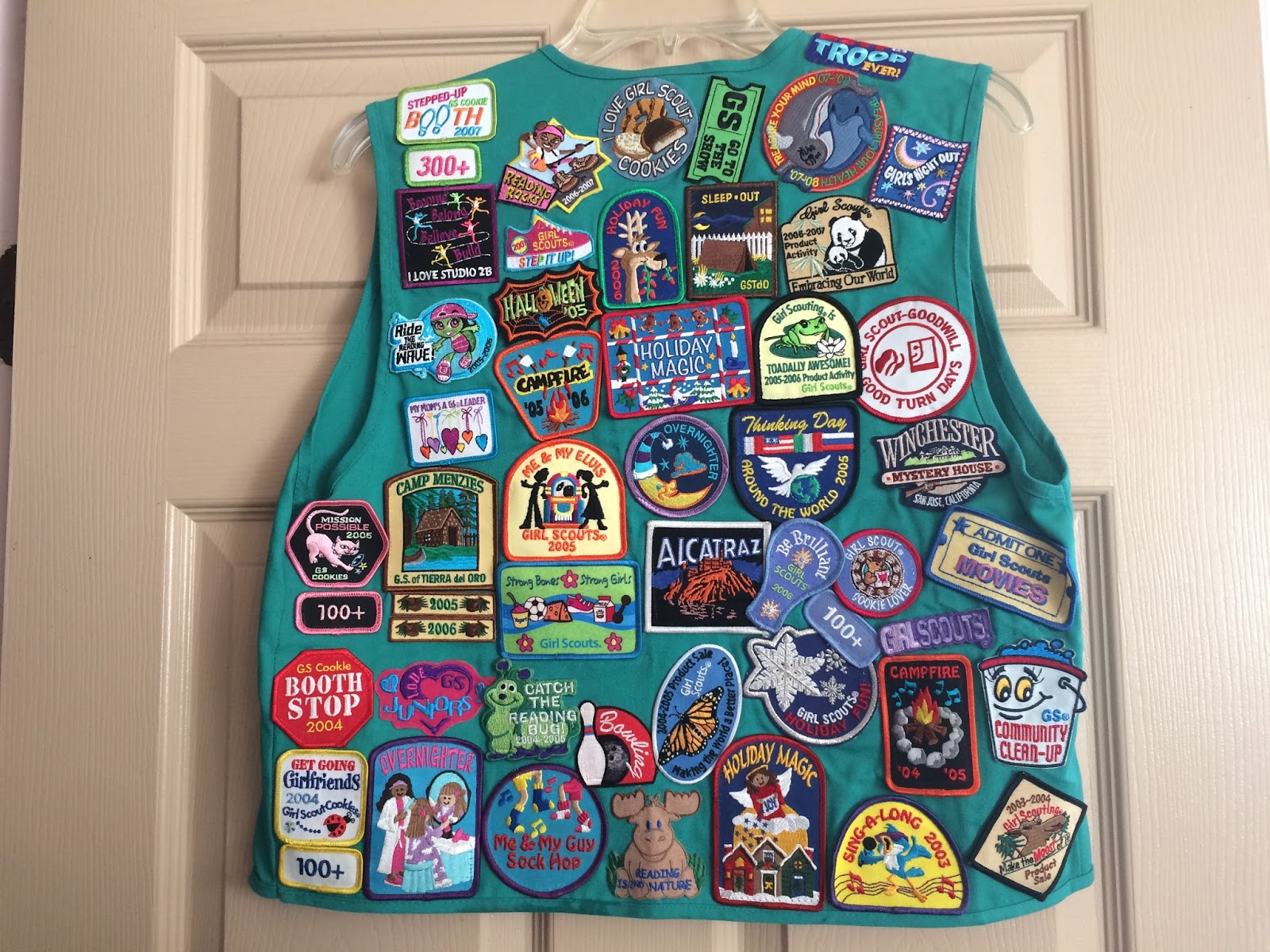 And last but not least my shirt. I cut apart my old Girl Scout sash and sewed it on my shirt. I'm never going to wear this again so now everything in one place lol. Plus now my badges from when I was in like 4th grade are finally sewn on something haha. 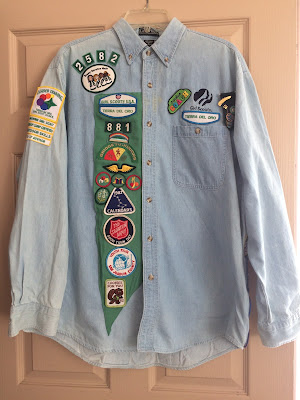 I put the top portion of these on. 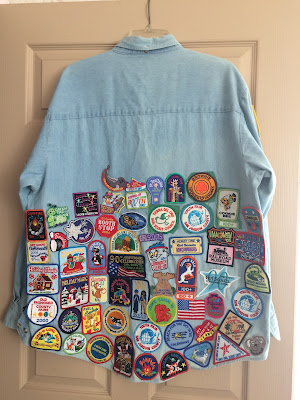 After getting those done I felt so accomplished! I've only had those tucked away for like 10 years lol. Now I can fold them up and just put them in the hope chest or the kids keepsake boxes for them to do whatever they want with when they get older.

Next up I took out a bag that had this wadded up project in it. 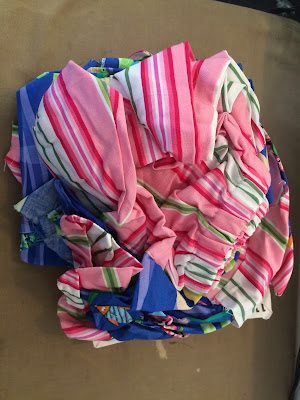 and several hours later and a You Tube video on how to correctly sew bias tape on (which I think is why this got set aside in the first place-who knew it was so easy!) 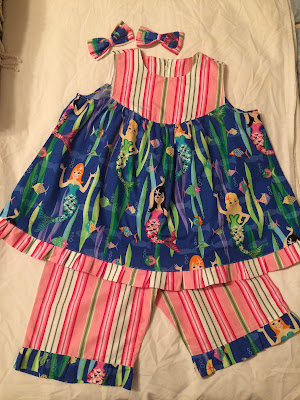 I had this! Of course it was dark in my room when I took the picture but isn't it cute?

I think originally it was Melissa's size but now it should fit my niece Ava so I will give it to her for her birthday. There is also a little purse but I need some interfacing to finish that so that will be done after I go to the store.

Now I have 3 mostly empty drawers in my closet and all the unfinished projects in the house done (well craft wise lol). I know there are several projects out in the shed that I didn't finish but I'm working on my room for now.

Now, what to put in those drawers..

And what should I make next haha!

I'm exhausted just reading all you do.