Of course with all the stress going on I have to get freaking sick. I can almost breathe out of my nose right now but it's migrating down to my chest. Ole.

We aren't having too much fun with the whole "family dynamic" at the in-laws place. The funeral isn't until next Monday so we have a little bit longer until it's done. Lots of toxic people that I normally try to avoid.

But on the nice side, yesterdays was Scott's mom's birthday. I wasn't going to go since I'm not feeling all that great but Jessica (she flew in Tuesday) told me to just go. So I did. Just tried not to breathe on Scott's mom. 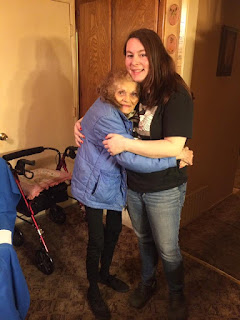 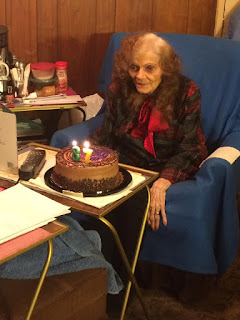 We took over pizza, cake and ice cream. His sister Suzie who lives there was there but that was it. I'm glad she didn't have to spend her birthday alone.

Ah, no one should spend their birthday alone. I am sure that made her very happy.
Hope you feel better!!