Well I survived my first 3 day craft show! I really really wanted to call in sick today but I knew I had a ton of work to do and shouldn't. 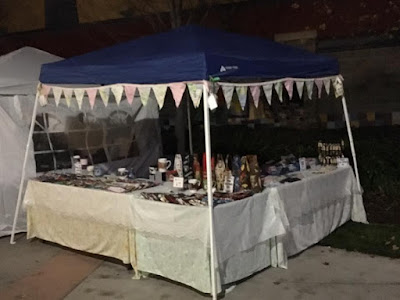 So we did Thanksgiving, more about that later. We got home fairly early and I did a little bit of last minute prep for my Black Friday set up! The directions said that set up started at 3am so we would be open by 6. I left my house around 4:30 maybe. Scott followed me over with the big tables in the truck and helped me set up the tent, tables, and even my stuff on the tables. That was so nice of him! Good thing he's usually a morning person ;) 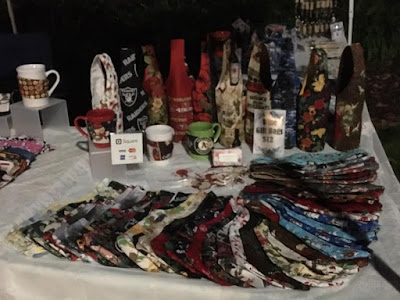 I got all set up and the crickets. Finally a couple hours later I had a sale from a guy that had a booth down the way. Then he came back 2 more times to buy more mug cozies. I gave him an extra since he was my first and second sale.  Things finally picked up as the day went on. We were over at 4 but I think I didn't actually start packing up until a little bit after. The day had started warm, then got really cold when the sun came out (so weird) and then got blazing hot in the afternoon. I actually got a bit sunburnt on my chest and face (I did put sunscreen on my arms though). 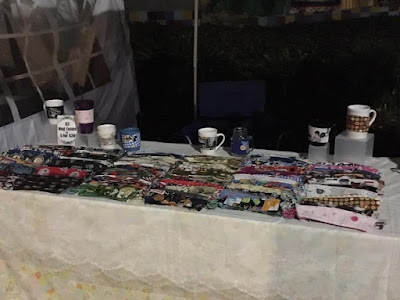 Both of my girls came and spent some time with me but weren't there at the same time so that was nice. 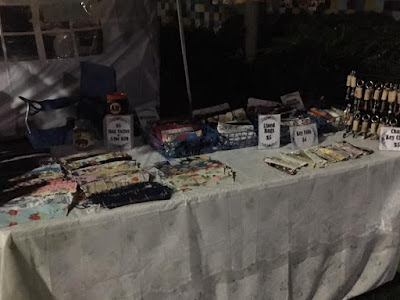 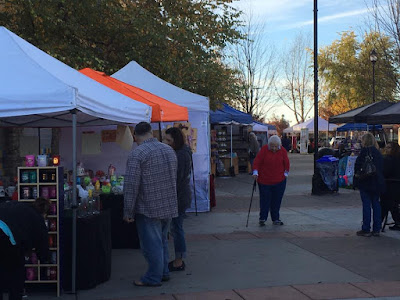 There were several booths that were not craft items. 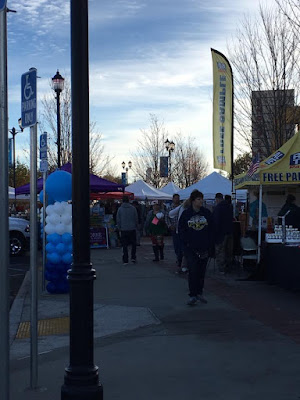 After day one I was pumped for day 2. When I got home I sewed up a few more cozies and then went to bed with dollar signs floating in my head ;) 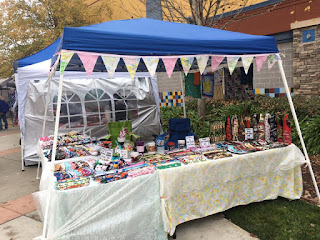 Day 2 we left the house around 7:15-ish. I was probably not completely set up until 8:30 but it didn't really matter because like the day before we didn't really get busy until about lunch time. Melissa and her friend came to hang out for awhile and her friend called her mom to come buy some of my stuff. Gotta love the kids doing my sales for me ;) 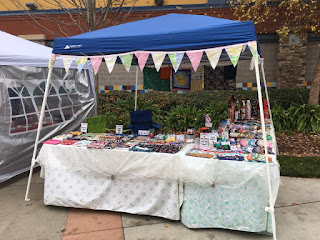 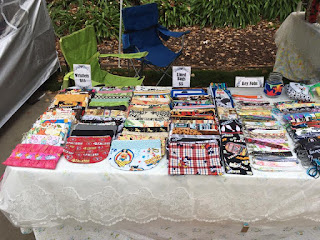 I made what was left of the key fobs $1, they were mostly just floral ones left. I also marked down my little tooth fairy pillows to $5 since I was tired of packing them up. I sold all 3 of them at that price (2 to the same person).  Wine totes were marked down to $10 instead of $12 and the little tissue holders I put back down to $2 and sold quite a few that way. They are all made from scraps so don't really cost me anything but time and they don't even take much time to sew up. 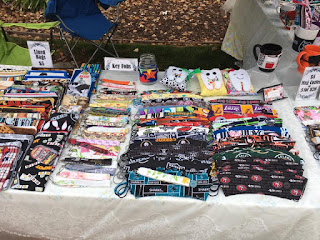 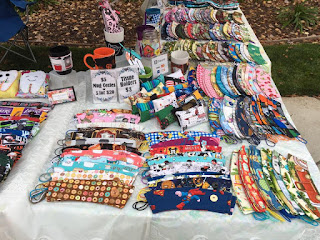 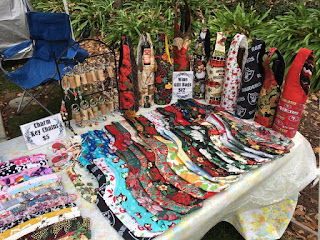 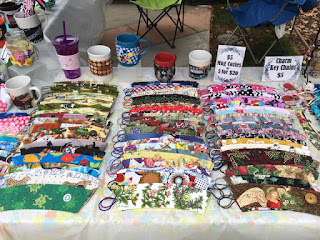 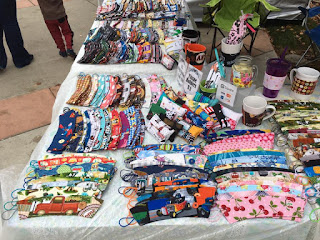 On day 3 a lot of people didn't come back since it was supposed to rain. I went outside and checked the weather app and it didn't look too bad so I decided to give it a go. When I got there I got moved on the main area which was nice to see how that worked out. I was kind of by myself though across from "the row." I still did fairly well even though it did rain a tiny bit and we all packed up about 1/2 an hour early to avoid the big storm that never came at 4:00.  All in all I'd say it was a successful weekend.

1. Pack water! I got dehydrated the first day. I paid $2 for a WalMart brand bottle of water. That's desperation.

2. Pack meals and snacks so you don't spend all your profit on food.

3. Have people come hang out with you so you can take a bathroom break.

4. Pack weights of some sort to hold down your table cloth and or things on your table if the wind kicks up.

I'm sure there's a lot more but that's what is off the top of my head. I think I'm signing up for another event in 2 weeks but I keep forgetting to get my check mailed off. I will need to do it tomorrow to get it in in time. This one is at a school so it will be nice to be inside and in another city. I am going to take some of my profits from this weekend and buy some of those big tables that fold in half so they will fit in my car better and I won't have to borrow my mom's tables anymore.