Ah another day with no bra, gotta love the three day weekends when you don't actually have to leave the house. I feel like I'm going so much that I need to just put off any "quick trips" to town for when I am already out and about.  I should probably actually put away that laundry I was talking about putting away on Friday and wash my clothes for next week. Since I'll be living out of a suitcase and all that.

Yesterday I spent the day sewing the rest of the drawstring bags I had cut out for Christmas presents for the kids. 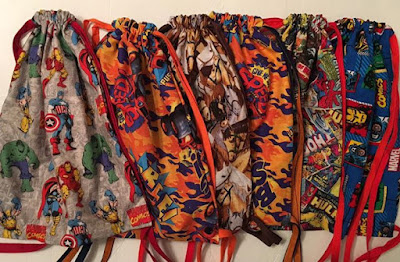 I made a significant dent in how much bias tape I have around here. I had to get a little creative on a few of them to use what I had but I think they are all really cute! If I made these for orders or to sell I think I'd go check out cording at the fabric store to make them look more professional.

After I finished those I started sewing up some more mug cozies I had already matched up and put together.  I just need to put the buttons on. I finished sewing those at 12:30 am. I had no idea it was so late lol. 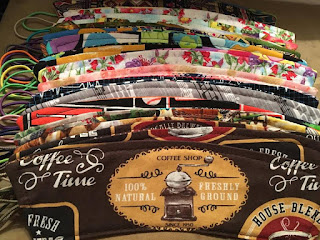 I was watching The Fosters on Netflix. Someone recommended that to me when I was saying I had felt like I had already watched everything that was worth watching on Netflix. It's actually pretty good for a TV series, I just wish I could cut out the theme song part when it switches to the new episodes.

I have never watched Fosters, but there is so much to watch on Netflix I can't fathom running out of stuff. 3 days of no bra, is actually called Nirvana. :-)