Wow I can't believe it's been almost 2 months since I last blogged. I just read my last post and I left you all on a cliff hanger! When I was here last I was going to go to the eye doctor to finally find out what was wrong with my eye ball. I had made the appointment in my home town instead of the bigger one where I went before (I guess this Dr. goes all over). I got there and it was in this little tiny office. The office was full of people. Families.  So one person would be there for the doctor and have at least four people with them. What the hell. Needless to say there was almost no where to sit. I lost my seat when I went up to the counter to pay my copay. Who does that? Just grab someone's seat like that. I ended up on a little bench in a hallway across from a room that they would call people in, see them for a few minutes, send them back out, then call them back in when the Dr came around. Talk about maddening. I lost my bench seat for that too but asked someone to move over lol.


The Dr. said I have a drusen. I was like what the heck is that? He said I was probably born with it and nothing to worry about. Shew. Thanks for all the stress that I'm dying or have MS for nothing. I'm just a bit more defective. Lets add that to my extra rib haha. Also, always ask for a print out when you go to the doctor and he has a thick accent so you can figure out what the heck he diagnosed you with. So helpful.


So what have I been up to? Working! Both at work and at home. You see awhile back I saw an advertisement on Marketplace for someone selling some fabric. I bought about 20 bins of fabric for $200. Which, if you don't buy fabric is a HUGE DEAL! I just had my little car so luckily they had some trash bags and we put it all in there. I was doubtful it would all fit but it did! 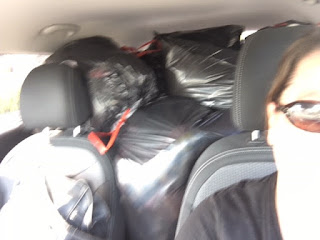 Of course while I'm driving home I'm like what the heck did I just do!?! I texted my friend and was like hey do you have a place I can put a dead body? Just kidding, it's just fabric. BAGS of fabric. I took about 10 bags over to my neighbor friends garage and took the rest home.


Months later I am down to about one box of fabric that I didn't sell. I've made about $2600 reselling it on Facebook groups. Score! But, a lot of work.  I may be a tad bit addicted now and scouting out other sales posts on Marketplace. I have bought a few more things! (Yesterday I drove 40 minutes away to check out someone's stuff and buy a bit.)


I could really use an extra room in my house! Or a garage, or a shed! Garages at our house are only for cars that don't run and take up a lot of room apparently.


Along those same lines, my oldest has moved back into our house. Trevor so nicely gave up his bedroom for her (he likes to sleep in the living room all summer usually anyways) so now I have a teenager living in the living room. Have I mentioned we could use a bigger house? I know all this is just temporary though since everyone is on the cusp of moving on. Just give us some notice if you want to come over ok?


Tomorrow is the 4th and we'll be going over to my brother's house for some swimming and bbq. Although it's not happening at 4 so unless it's really hot I don't see myself getting in the pool.  The older I get the less I like cold water. I just realized this morning that hey I probably need to go to the grocery store to get some food for tomorrow. That should be fun.


Saturday is a baby shower for my sister in law Maegen and Sunday I am doing a craft show thing. I should be sewing all week for that. I need to get busy!


PS just noticed I had some comments that were in the moderated area, sorry about that!

So glad there is nothing wrong! After my two year hiatus I came back and read your last blog post. Being the person I am, I assumed the worst when you did not post after that! Glad all is well! My brother in law does a lot of the buying and selling on local groups and has made serious money also! Congrats on the extra $2000! Spend it on you! Happy 4th!