Is it Bedtime Yet?

Man I'm so tired! Probably because yesterday I was mostly a lazy bum and watched Netflix all day. I did also go through 2 boxes of fabric and put some stuff up for sale but I didn't sell a whole lot of the stuff I decided I could part with. Darn.  I even took a two hour nap, which is probably why I stayed up until midnight watching more Netflix.  That hurts when you set your alarm for 5am.

So what was I watching? I finished watching Insatiable. I have to say I did look up twice how many more episodes there were in the season because I was getting tired of it. Like a lot of shows lately it seems like they try to cover all the hot topics. Bullying, LGBT, Religion, & they say this show is all about fat shaming but I'm like eh I've seen WAY worse in regular every day life. By the end of the season I was just like REALLY?  Probably won't watch the next season if they make one. Although I did enjoy Alyssa Milano's southern accent and I think she looks fabulous for being a couple years old than me haha.

After I finished watching that I pushed play on The Guernsey Literary and Potato Peel Pie Society even though it was like 9pm. Mostly because I still had to go out and change the laundry over so I'd have clean underwear to wear to work. Also, good thing I washed more than one because I took a drink of my water, choked and peed my pants while I was coughing.  I swear. Getting old is not for the weak (bladder).

Back to the movie, I thought I had read this book for book club but turns out I listened to the audio book back in 2010. The book was much more in dept about the Nazi's in the communities life if I remember correctly. The movie seemed to be more on the main character, who I had to look up because I knew she was familiar. She was the blonde sister on Downton Abbey. There were quite a few of the British actors I recognized thanks to my binge watching all the BBC shows lol. I did enjoy the movie though. I would some day like to go over seas and see some of these fantastic places. Bucket List right after being able to afford a new septic system.

I did get a few checks of free money in the mail today! This insurance I used to have years ago was always sending me these weird small amount checks. I'm not even sure why, some kind of over payment or something. A lot of them were really small like .12 and this is before I had mobile banking on my phone. I'd stick them up in my little cubby hole and forget about them and then they'd expire after 90 days. I figured at some point they'd probably end up in that California unclaimed property website but I didn't really think much about it. A few weeks ago I got a few letters in the mail about them and all I had to do was put in my info (that they already had) and sign and send it back and shazam, free money! Lucky for me they put a ton of little checks together to make some bigger ones. 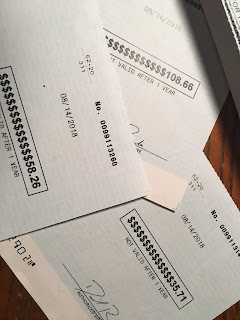 Now if I could just get a few more of those with a couple zeros on the right that'd be great.

I also left work an hour early today (not like I was doing anything anyways, I had already went through everything on Bloglovin) because my son stayed after school for early release day and was now "bored" and wanted to start walking/riding his skateboard home. 13 miles. In the country. No way man, I listen to way too many murder crime solving podcast.  So I went and picked him up and we went to the grocery store and then to dinner at Panda Express. I came home to a clean counter and all the dishes being washed which was freaking fantastic. I so appreciate that my daughter did that.

Alright, I have a few things to pack up for shipping and then I think I'm going to go lay down. We had one girl sick at work today and one went home early so I'm hoping I'm just tired and not coming down with anything.

Wow all that Netflix, I am envious. I have not watched InSatiable. It got such bad press and I didn't think it was my cup of tea anyways. I'm an old fart :-)
Did you watch The Marvelous Mrs. Maziel on Amazon? I think you might like that. I loved it.

How do I get fun free money like that? Not a bad haul when you don't expect it.
Enough that we could have dinner and drink....or just drinks. :-)

Free and unexpected money is the best!!! I am thrilled when I find a few dollars in a jean pocket! LOL!

I don't have Netflix...I am probably the only one on the planet! LOL! I only watch like three shows and read most of my free time so I am really left out of the popular show conversations! HA!