Oh my gosh how do the weeks go by so quickly? Probably the same way my sink keeps feeling up with dishes and the laundry is always overflowing.

So all last week it was the "weather watch" for Sunday. Sunday was the big day! The biggest craft fair I have dared so far. The Lodi Street Faire! Now this fair was NOT cheap to get into and that was most of what I was worried about. Would I make enough to cover my booth fee? I had been furiously sewing for weeks to make sure I had enough good inventory that people would want to buy. I may have made 117 new mug cozies!

Monday there was a rain in the forecast for Tuesday and Wednesday. Wednesday it was thundering and lighting-ing and Rusty was a mess. I need to try buying him a thunder jacket. If that doesn't work I need to just ask the vet for some pills to chill him TF out. I gave him 3 Benadryls and that got him to at least stop pacing for a bit. 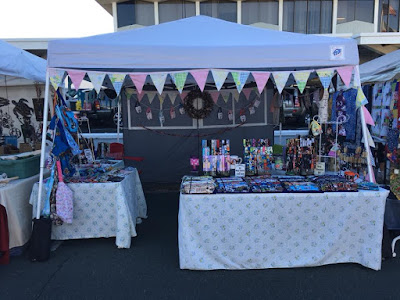 This is how it started, moved tables around 12 times after that ;)

After that the weather was looking great! 80 for Sunday! Saturday I look at the weather and there it was. The dreaded WIND symbol. GDMF. What is it about me that everything I plan for has to have either wind, rain or be 185 degrees outside.

At least I'm kind of wind proof. I have a back up wind set up so I'm not TOO worried. I have my 30 pound sand bags for each leg of my canopy so it won't blow away like that one time. (and oh my look at my first real show I did, I've gotten a bit more crazy with my booth now). 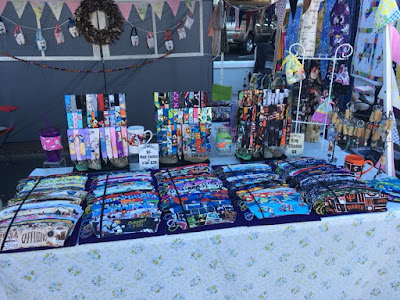 I had asked my mom if she wanted to come with me to help out so she did. She drove her own car but followed me over. From start to finish I never talked to anyone that ran this fair. So weird! You sign up all online. When I drove in the gate there was no one there. I rolled down my window to ask someone what booth number they were and she told me I'd be down a bit. When I thought I was kind of close I asked more people what numbers they were (out the window Grey Poupon style). Finally I found my spot. Mom was able to park real close and after we unloaded the car I parked right next to her. 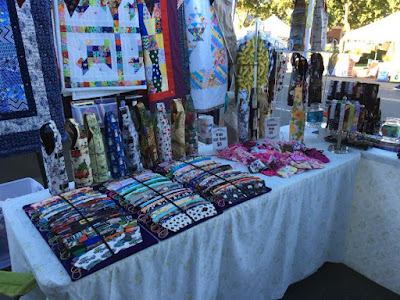 
I had 2 older ladies on each side of me. The one to the right had quilts mostly and the one on the left had all kinds of metal stuff along with aprons and some other crafty things. All really nice women and my mom loved talking to them all. I keep telling my mom she needs to make some stuff up to sell. She is super talented and could make some great stuff! I know from this weekend she'd love having all the people to talk to. 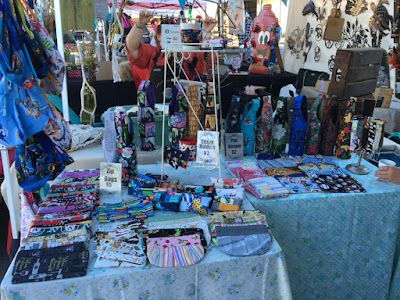 When we first got there my mom pointed out the weights of the metal booth next to us. I was like yeah I don't know if I really trust those ones I've seen them come loose before. They had 2 on each leg (they might have had more weight to each one I'm not sure). Sure as shit at 3 pm that tent went flying. Those poor ladies!

In the morning it wasn't quite as windy and I was doing really well! I had made $50 plus by 9am. AWESOME! Way on track to making my booth fee back. My mom was super hungry so she went off in search of food. About an hour and a half later I was like where in the hell is my mom? I sent her a text asking if she was lost and I got back "yes". Haha. I think she got a little side tracked by all the fun stuff. So she finally comes back with no food. I was like MOM where's the food! She hung out for a bit and then went and got us some. 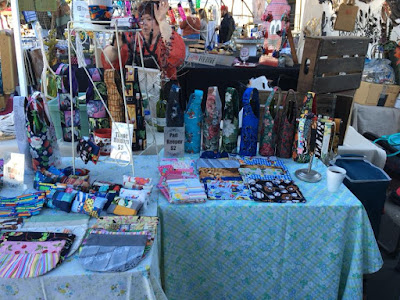 Later she took the little folding wagon she had given me and went to get this thing she thought she had to have. She comes back with this big wood child's buffet thing. I should have taken a picture. She wheeled it into my booth and I was like well that's nice lol. Eventually we stood it up and used it to set a few wine bottles on. Of course when it was time to go home it wouldn't fit in her car. Good thing my Dad could go borrow my brother's truck to pick it up. I told her she needs to remember she drives a Spark and not a van anymore lol. The gal next to us teased her and told her she should just get a Smart Car so everything will REALLY fit. 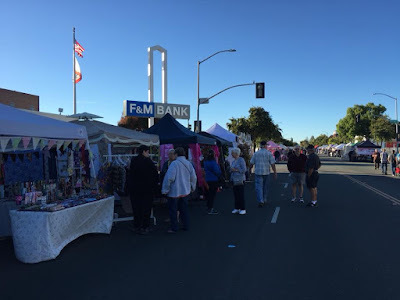 This is the 8am crowd, later you could barely walk down the street

The wind kept gusting and bit here and there and I had several wine bottles fall off the table (they are just used ones I use for display for my wine totes). Luckily most of the time the glass all stays in the tote when they fall and I just dump them out. I think I lost about 6 bottles. Around 2 it was super windy and I had to take down my key fob displays because they kept falling over even with rocks on the bottom of them. I also took down the window displays because they were making me nervous and the new shade back I got for the tent because it kept whipping. Next came my buntings because I couldn't stand seeing them fly around anymore.

So needless to say business pretty much came to a screeching halt around 2, but it was ok. I made more than 2x the booth fee so I felt fine about it! I will definitely sign up for the next one in May. Although with my luck it will probably rain and be windy ;)

Next Saturday  October 20th I have a booth in Fresno which is a bit of a drive but somehow I got talked into doing the show. Mom is going to ride with me so I need to take 1 box less, most likely just the wine bottles since I don't need to take that many anyways, they are just fun to put out when they aren't blowing off the table.

Hopefully she won't find anything big to buy ;) One of us might have to buy a truck soon lol.  I spent my day off on Monday (love that we get Columbus Day off even if it is a bogus holiday) doing some inventory, listing a bunch of stuff on Etsy and going to lunch with my friends. Now the rest of the week I need to work on a few more things I that people were looking for and or I sold out of.

I'm glad you made money, I made bugger all my last market! So annoying. Wind is the pits, probably worse than rain even. I don't have any weights for the legs... must get some!
I hope you do well at your next market too. I've got three this month!

Your booths always look so nice compared to others.
But you know that!

Your booth is fantastic! That is so cool that you do that and yes, it sounds like the perfect place to take your mother as she enjoys the people so much (me, not so much - LOL!)
You are so talented! I love the story of you mom not driving a van anymore - that would be me! I bought that paddle board and picked it up in my Civic...the guy looked at me like I was nuts but I bet I could've fit that chest in your moms car too!!! LOL! :-)