I survived my 3 days of craft show but just barely. Actually Sunday wasn't all that bad but Saturday night I was totally exhausted and went to bed at 7:45 pm.

Of course the first morning I'm always up crazy early and like OMG I have to get there on at such and such too early time!  Scott is such a morning person so it's amazing when I'm having to load the whole car up and he's magically sleeping in. Like how are you sleeping with me getting ready and back and forth in the bedroom looking for stuff. And the HAIR DRYER. How can you sleep through me using the hair dryer? I wake up when he rolls over a certain way lol. So anyhow, I was out in the garage getting the VERY LAST thing to load in the car and he runs out like he was going to help. Yeah thanks buddy!

He made up for it later when he brought my 2 side walls for the canopy though. Damn it was freaking cold and rained a bit on Friday. The 2 walls helped a bit.

Before he brought those this was my set up for Friday. (I know these are probably boring for other people but I like to go back and look at them) 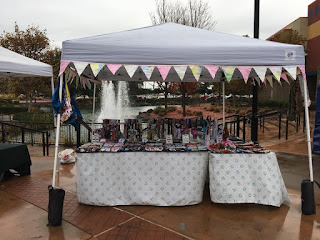 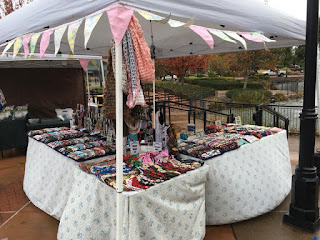 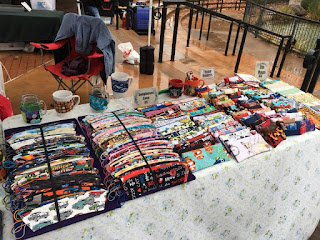 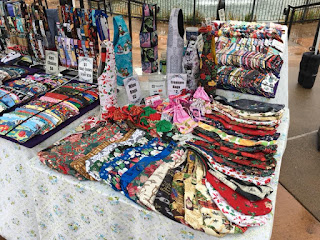 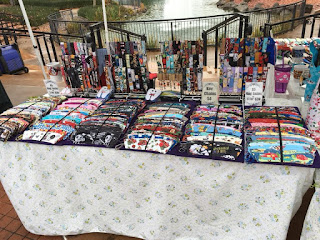 Friday was my best sale day but that was also probably because 2 of my friends came and bought from me :)

Saturday I got up a little later, I started off with the 2 walls up and then took the side one down after a bit. Later I took the back one off because the wind was blowing and I was afraid it was going to take my tent. I do like the the way the walls close in my booth so you can see things better. I'd like to get a couple more of the gray walls (got that one at Wal Mart a few months ago and it was the only one they had) so they all match. The gray is kind of nice, different from other people.  I do feel anti social though having it up, I actually took it down so I could see the guy next to me. He was a cute collage kid with a great personality. Fun to talk to. I told him he could sell ice to Eskimos! 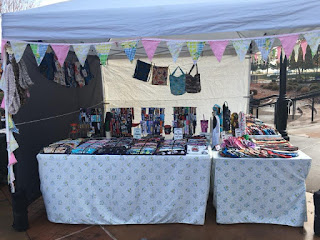 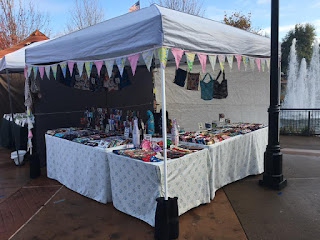 The booth 2 over was selling mini donuts they made right there in front of you while you wait. So cute. I may have had these 2 days in a row. 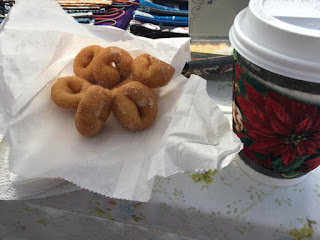 Saturday I almost made the same as Friday, just $20 shy. I sold a ton of wine bottle bags. $5 is the magic number to sell those apparently. I have a couple I have had since the first round I made. I'm starting to think I'm just going to cut the fabric and make them into something else if I don't sell them by my last craft show. No point and carrying them around for years.

Like I said before I was totally exhausted when I got home Saturday. I probably would have just went straight to bed but I told someone I'd make them a mug cozy for the next day. I had a drink and made that and then went to bed.

Sunday I was dragging ass and waited as long as possible to get up and leave the house. When I got there we had to figure out how to squish another gal in between me and the people to the left of my booth. I had to set up a bit different since I was losing my corner.

This really is a great way to set up when you don't have 2 open sides. It works really well! 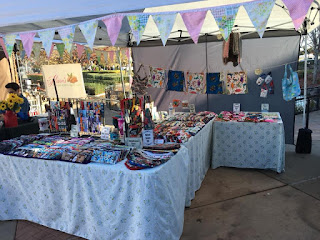 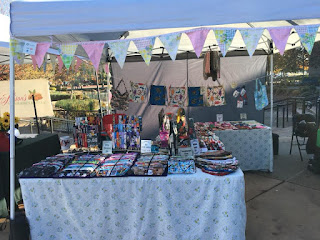 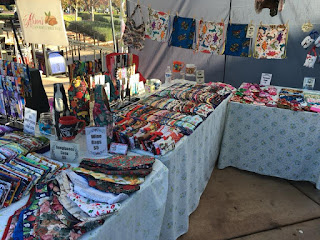 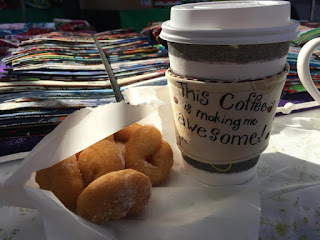 I sold a ton of the sunglasses cases that I made. Probably at least half. I had one person buy 5! People love them in the Disney prints.

I marked down what I had left of the zippered bags to $3 and still only sold 2. I'm about ready to cut those up and make them into something else lol. I've been debating on making some more of the rounded bags but I'm not sure. It's so funny how usually if I have a ton of an item I sell that item better. Although I think I only sold 2 of the treasure bags all weekend and NONE of the Christmas ones. What the heck! Hopefully I can sell some at the next 2 events. If not maybe I'll be giving them to coworkers lol.

Ok off to bed. I went to Bunco tonight. I had a great time but didn't win any prizes darn. We did do an ornament exchange so that was fun too. My mom got the one I brought. Man I look horrible. I should probably do something about that.

Your stall looks great all the different ways you set it out.. . it looks like it was blowing a lot.
I have only used the back wall of my gazebo so far. Mine are white, so look nice. Glad your 3 day market went well.

Okay was he really asleep or pretending to be asleep so he didn't have to help load up the car etc? :-)
I'm with you, I wake up when he moves funny. He can sleep through a train.
Only having one wall could you put it behind you and your goodies? This way you can see the guy next to you.

Cudos to you!!! I could never do a show three days in a row - you are a serious trooper!!! WOW~~ So glad it was worth it and you made money! Always makes it worth it!!! Your bunco clan looks like so much fun and I love that ornament exchange idea!