Yesterday I finished my little pile of sunglass cases in time for my show. 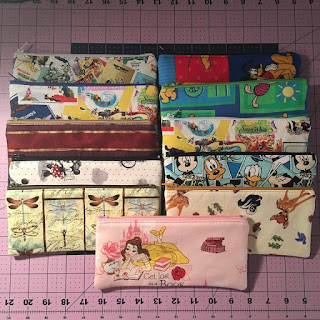 Then I had to repack my boxes since it was inside and upstairs in a building and I knew I would have to get it all up there myself. I got it down to my 2 big boxes and threw in my fold-able wagon "just in case".

When I got there there were no signs, no one standing outside, no one at the table to check in. I don't think people realize how nice that would be. Like ok I'll just figure it out on my own and walk around for the person in charge. Glad I know what she looks like lol.

I was able to get one big box in my wagon (perfect fit) and put the other box on top and it stayed there for the ride in. I'm glad there was an elevator, that made things much easier.

Here is my stuff all set up. When the girl on the left of me got there she rearranged her table and I was kicking myself for not doing the same. I would have liked to put it so I could sit inside the L instead of against the wall. I'd say for next time but I'm not going to do this event again since I just barely broke even for my booth fee. I had to condense my cozies quite a bit to get everything to fit on the tables. 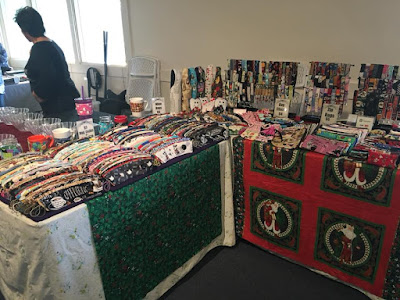 The girl on the right of me was the same gal that was next to me last time I did the outdoor booth. She has bags and pillows she probably buys in bulk from china or something. Kind of annoying but she's nice enough. She sold like 3 $20 pillows and a couple little bags so she probably just broke even too.

I think maybe a lot of people didn't come out because of the smoke. It's REALLY bad here. Everyone is hoping for rain. So far there is rain on the forecast for Wednesday.

While I was at the event Jessica called me to tell me there was a horrible accident right at the entrance to where we live. Two cars were obliterated and another truck involved. At the time she thought maybe one was a Jeep and Melissa's boyfriend has a Jeep. Melissa didn't answer her phone for about an hour so we were all just a tad worried it was her, although she doesn't usually come home on Friday nights (stays at her boyfriends). We were all relieved when she finally called us.

Turns out the one vehicle was an old Dodge van, like the big old 70's ones. It was just a big pile of scrap.  The guy who was driving it is my neighbor about 5 houses down. Rumor is he has internal injuries. I hope he's ok. My kids always called him the dalmatian guy since he always has a dalmatian dog.  Hopefully someone is checking on the dog.

Sounds like one of my neighbors was pulling out of the club, one was pulling in and this big truck came from no where and hit them both. I guess the truck guy fled the scene. Very scary. The girl in the car supposedly has a broken arm but is other wise ok. By the time I got home a couple hours later everything was cleaned up.

oh that would have made me a wreck waiting to hear from my daughter. scary shit. As for the air, I think you all need rain, the whole state, for about a week. I can't fathom what everyone is going through there.