It was so nice to have yesterday off of work since I did the craft show all day Saturday. I spent all day Sunday and Monday sewing. My friend had wanted me to make some stuff for her before Christmas but I was too stressed out. She asked me if I had time now so I got them made up for her. 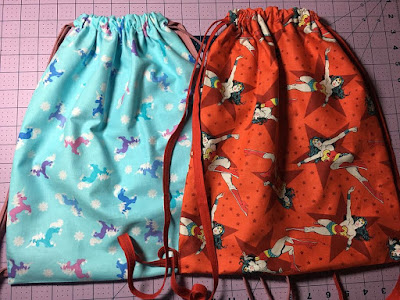 a mug cozy and a make up bag. 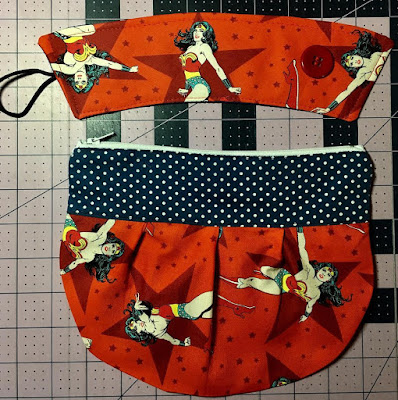 And then I worked on some keychains I had started. These are always kind of a work in progress. I'll do a few steps and then go until I run out of something. I really enjoy making them. Something from little bits and pieces of fabric. I sold several this weekend. I had one person buy 3 different keychains so that was fun. (I sell them for $4, they cost me about .20 to make if you don't count the fabric scraps which would probably just have been tossed.) Other than that it's just time but hey I get a lot of Netflix watched while I sew ;) 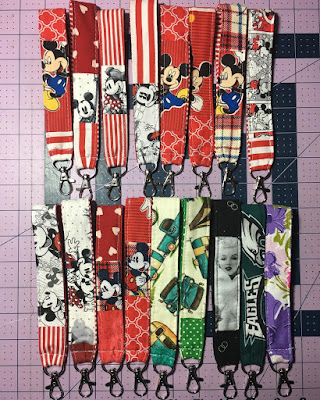 This weekend I watched the latest season of Grace & Frankie. I think that show has about ran it's course. What's up with all the F bombs? I hang out with a lot of older people and they might throw one in every so often but nothing like that. I did think it was kind of funny when they were having the vision or whatever it was with Grace's face all done up.

Then I watched the new season of Friends From College. I was totally cracking up with the skunk scene if anyone has seen it, you'll know what I'm talking about. It's so weird to see Fred Savage play a gay man. I was totally into Wonder Years when I was young and so was he ;)

Now I need to find something else to watch. I watched Derry Girls a couple weeks ago, so funny!

I also watched the Marie organizer lady that is all the rage. I was kind of laughing to myself that I kind of already organize the way she teaches except for all my crafting/resale stuff. And everyone else's crap in the house. I have slightly given up on my house. Once someone moves out it will be easier (not picking anyone just when everyone is in a bedroom again!). I don't really appreciate having to clean up after adults who don't appreciate me cleaning up. And I don't need a lecture on withholding things or what not because hello I've been married 25 years that obviously doesn't work in my house. I just get angry and that doesn't get us anywhere besides me being angry haha.

PS my Etsy link is on the left side top of the screen. I do not put any character/sports items on there so if you are interested in those just message me :)

ETA here's a picture of Trevor leaving for his first driving lesson on 1/13/18! 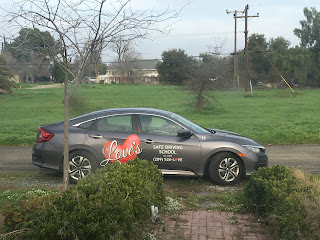 At the beginning and end of last season they said they were going to just say Fuck It to everything. They earned it. So they did this season and everyone has their panties in a twist. Does it really bother you? I didn't find it all that much so I must hang with heathens. My friends talk like that. Grace's face in the "what if" segment was a hoot wasn't it?

I have never watched that show - I saw them on Ellen and they swore a lot on there too. It was funny at first but then it gets old to me. I dont like hearing anyone talk like that though - I get angry when my nieces say "piss". I think it makes people ugly and shows lack of class more than anything. But again, I never watched the show. You have a serious talent for sewing! That stuff looks great and I love the backpacks!!!

You are my twin right? I can't believe how much we are alike. I just spent two days sewing and watching Netflix! Probably not seen as much as you yet cos we've only had Netflix a couple of months. I'm watching Suits right now, only onto Season 2 so far. Gimme a list of good series to watch would ya? lol

OH and I've watched a couple of episodes of Grace and Frankie so far too.