knock knock is this thing on

I've done about 1000 things since I last posted here. So far behind! Work is so incredibly boring and when I get home I have a ton of stuff I want to do (and not do that I have to do-dishes yuck) and things to work on.

I've been doing a lot of sewing for all the craft shows I have coming up. I just had my first one weekend before last at Dutch Hollow Farms. 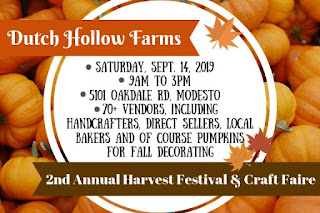 Of  course that ended up being the day that the weather was like I AM STILL SUMMER. The forecast was for 100 degrees and when I got in my car at the end of the day it said 106 so it was somewhere in that area.

Except for the anticipation of the heat (have I mentioned that I can't handle the heat? Pretty sure I have) I was excited to go to this new event with different organizers than the ones I usually do.

This is the first time for my new canopy since my other one got bent at the top of one of the legs (camping). I still want to try and get a replacement part for that if I can and then I'll have 2 if needed. This one is a little bit easier to put up than my old one and has gray legs.

My morning started with my alarm NOT going off, since duh it was on weekend mode. Bad Julie. So I was up an hour after the time I had originally wanted to wake up (which really was only like 1/2 an hour since I always give myself several smacks of the snooze button to wake up). I had already loaded the car so I just needed to get myself ready. Good thing!

I packed a little ice chest with 10 bottles of water. I had put them in the freezer and some had froze all the way and some had not, which worked out fine. 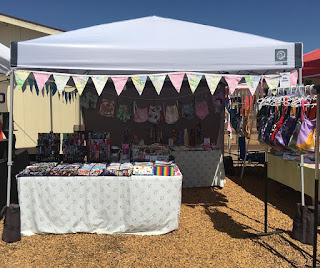 Do you see that stuff on the ground? It's almond hulls. Which make it really difficult to drag a wagon with heavy stuff in it. It took me 3 trips from the car to get all my stuff there and on the last trip someone had drove their car right in to unload. DOH! I wish I would have known I could do that. 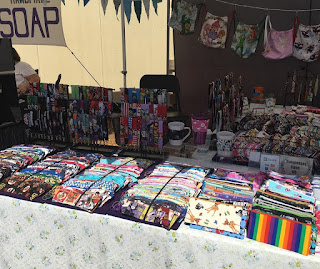 The event started at 10 and I was just about all set up by that time. It was REALLY busy so I didn't even get to take pictures of my booth until a few hours later. I probably could have used a helper. This set up works really well for when I have people on both sides of me. It allows a few people to walk into the booth at the same time. 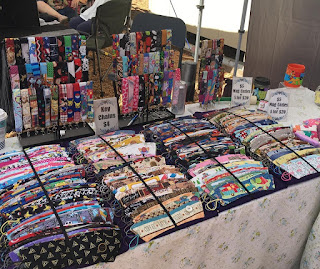 I sold a lot of the little zip bags that I call sunglasses cases. They just have a little bit of padding in them, personally I use a couple in my purse for all that little stuff that floats around.  I had went through all my character fabrics and made up a bunch. 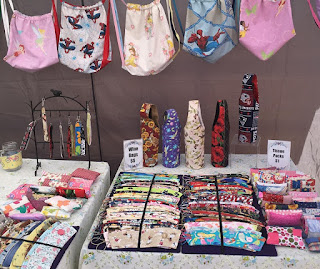 I hardly have any wine totes left. I know I have some cut out already to sew up, I should do that. I sold that Patriots one at the end of the day to the booth next to me.

I was drinking water all day and at about noon I knew I was starting to over heat. The event went til 3. I asked Jess if her boyfriend could maybe come help me pack up (Scott was with the other kids at my niece's birthday party). Daniel was super nice and came and helped me pack everything up and load the car. What a relief to not have to do that by myself. I ended up drinking ALL the water I brought.

All in all it was a very successful event and I did well! I'll sign up to do it again next year if they have it. Hopefully that's the last of our super hot days. What's funny is it was in the 70's the next day.

My next event is the Lodi Street Fair on October 5th. Hopefully this one will NOT be windy. If it is I think it will be my last time doing it.