Well it's Monday again. Booo!!! But I had a pretty good weekend even If I was still coughing. I'm going to throw a party when I'm not coughing anymore!

Friday I went to the flea market on my lunch. I got what I thought was a nice crisp vintage table cloth for $1 but it's a repro, still cute though :) And a big box of rubber stamps for $10. There are some really large stamps in there that I can probably get $10 each for so that was a good find. I have quite the collection of stamps that I need to list somewhere. I will probably put them on Etsy since I seem to have better luck for crafty stuff on there.

Also check out my $5 lunch. I barely ate any of the noodles and rice and was stuffed. The chicken skewer things are so good. I think next time I might just get one of those and some noodles. 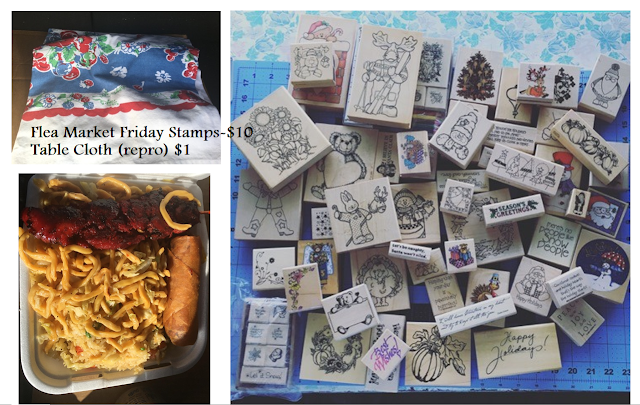 After work I went over to the dollar store to get some little baskets. I've been working on doing a little organizing here and there. I cleaned up the 2 kitchen drawers and used a few baskets in the bathroom and my bedroom underwear drawer too. Not sure how long the drawer on the left will be like that I need a bit more room for the long utensils. 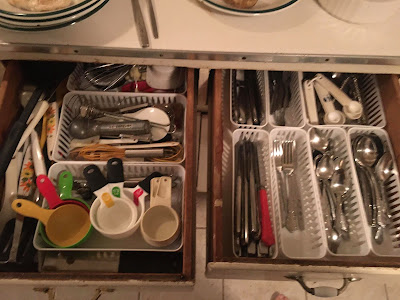 I thought I was going to sew all weekend but I only got these 3 bags finished up. I have a whole stack of cat print bags that just need the top stitching by the zipper and then to be sewn around the edges. 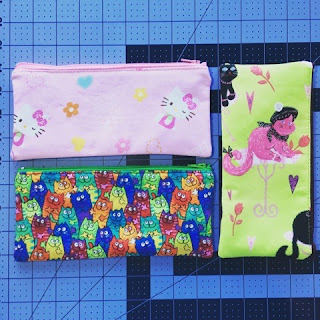 I cooked Friday and Sunday dinners. Saturday we had dinner with my family at my brother Joe's house for my mom's birthday. We had some nice Chinese food! No pics of that though.

Friday night I made Baked Garlic Parmesan Chicken. There was a lot of grease in the pan which kind of grossed me out. Probably won't make that one again.

Last night I made the "Flu Fighter" chicken noodle soup since I'm so sick of coughing and it sounded good. I may have ate way too much garlic bread.

My brother Joe lighting some candles for my mom. He just put a random amount on there and it was still a big flame lol. She will be 68 on the 14th. 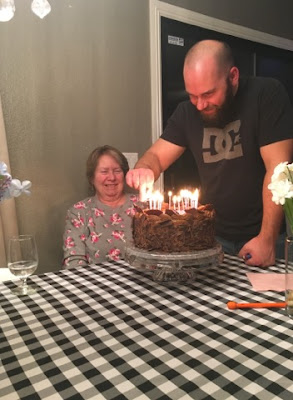 My cute kitties who helped me work on my projects this weekend. Tubby on the left and center (she loves that cookie bowl and has a feather from a feather duster) and my overly expressive faced Lucy on the right.

I was trying to do my "list 5 things a day" rule for myself this weekend but then ended up just spending ALL DAY listing this and that. I also pulled a bunch of stuff that wasn't worth listing and put it in my thrift store donation boxes. I'll probably take those tomorrow.

Here is what I sold on Etsy this weekend. I just listed the Irish sweater pattern yesterday. I got that in a big box of old knitting patterns at the flea market for $10 (for the whole box) I think a month or 2 ago. The doll and coat patterns were either .10 or .25 cents each depending on what store I bought them at, the Doily books I've had for awhile and paid .10 each for. The needle book I've had for awhile also. I got that in some stuff off Marketplace I think, and I sold 2 mug cozies for $5 each which is funny because I had put those on sale LAST week for $2.50 each.  I've had those for over a year now so it's time for them to clean out! 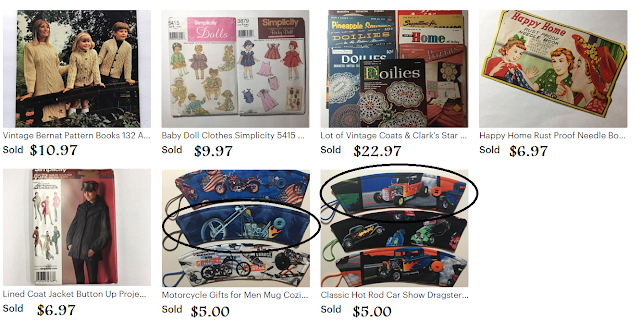 Hopefully this will be the week I stop coughing! No plans for tonight other than to make dinner. We'll see what I end up getting into.
Pin It
Posted by Julie H at 9:36 AM

Happy birthday to you Mom!!! Your sewing talents make me very jealous!!! That lunch looks awesome!!!! How is the kitty doing...Fully recovered??