Saturday morning I did an Instacart order and got the worst delivery person yet. She got SO Lost before she even got to the complex where I live. I've never had anyone get lost on the 6 mile straight road before. Holy cow that takes an extra special person. She was acting like it was my fault too. I thought about leaving her a bad review but then remembered she knows where I live lol. I always tip extra well for Instacart since it's a 12 mile ride from town and I really appreciate people doing it for me but man I kind of wish I didn't give her so much after all her drama.

I spent all of Saturday sewing, except for when Jess came over to make some Father's Day T shirts and needed some help with the printer/computer not talking to each other. I'm not quite sure how it happens but she always has problems with whatever printer I have not working for her. Works just fine for me though lol

Sunday morning Scott was like "it looks like the ceiling in the living room is falling down". Well hello, that's exciting. The ceiling and the two outside walls in the living room are the only sheet rock we have not removed and replaced. Scott seems terrified of the blow in insulation that is in the attic area and just does not want to deal with it. To me it seems like it would be like a good idea to remove that and put in something that actually might help our house but what do I know. He came up with a plan to use some 2x4's to hold up the ceiling so he could screw it in. Apparently it just had tiny nails holding it up. Here is Trevor making sure the 2x4's don't fall while Scott goes outside to find his screwdriver and extension cord. He never puts anything away, I don't know how I'm married to him for so long.
Yes the room is a mess, I've given up temporarily. I shall take it back at some point.

So then he made the ceiling look like it just went through an allergy test. Guess we'll be painting the living room soon. It's ok though it really did need to be redone anyways so this will just get things moving.


In the morning while he was thinking about how he was going to fix that I made him pancakes and bacon for breakfast (he usually makes us breakfast every weekend), then made potato salad, mac salad and fruit salad for dinner later.

We went over to my mom's cabin where Jess is staying and had dinner with all my kids plus Daniel (Jess' boyfriend) and his dad, his dad's girlfriend and their other kids. I know, we had a get together, during a pandemic. But the kids are always going to both of our houses so I'm sure we are getting our germs spread back and forth on a regular basis. 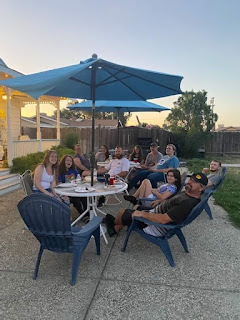 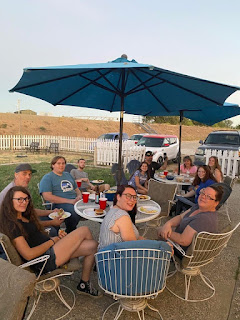 It was a nice evening. We were maybe going to do s'mores but we were all too tired and just came home. Sucks having to get up to work the next day. Wednesday I have to actually GO to work since it's my once every 2 weeks to help out to cover the office. We'll see how that goes. I have to go pick up the mail for the office at the post office. I don't know why they don't just get it delivered again since we have someone there every day.
Here's Tubby napping in front of the fan, so funny how they do that. Must feel good to them too. 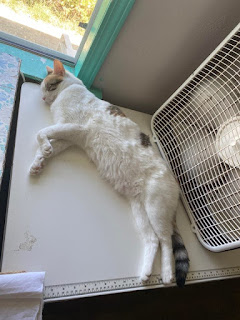 I saw someone post this and I'm like TRUTH! This will be Scott's siblings when his mom is gone, with their hands out. 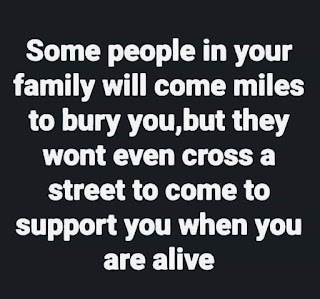 Plans for Monday include work, than more mask sewing. The septic guy is coming to look at our septic situation. I hope he has better ideas than the last guy that came out a couple years ago.
Pin It
Posted by Julie H at 12:40 PM

I haven't been around this many people is a very long time. I'm not that brave. :-)
Good luck with that ceiling!! Kind of scary.
I had not heard of instacart so I had to google it. 12 miles in a straight line and she got lost. That is some kind of special Julie. :-)

@Peg, if only they could find my house I'd be in love with Instacart. I think only the first person got here without getting lost.