TGIF! Looking forward to not having to work for a couple days. I actually have a lot to do for a bit. Gotta stretch it out and make it last!

Yesterday I worked in the office for awhile and I have to say I enjoyed it. So nice to not have any distractions (other than the phone a couple times). There was one other person working in the same room but he pretty much had his head down working hard. I tried to chat him up a bit but he was too busy working to indulge me much.

Anyone else find themselves doing that? I hardly talk to anyone anymore. So nice to just have some chatter.

After work I swung by the little farmer's farm stand across from my work. Just a couple tables with veggies. So cute. I got some zucchini, a couple cucumbers and few tomatoes. I cooked some zucchini in a little bit of butter and it was so yummy. There was actually left overs from the roast I made in the crock pot the night before so I had a little sandwich (sourdough bread loaf slice cut in half). I've been doing pretty good staying within my calories so far this week. I even took snacks to work yesterday so I wouldn't go out and get a big burrito. 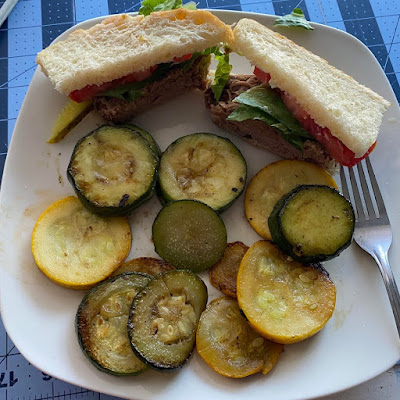 Last night I just played around with my secret project and then put some fabric scraps away. My drawer of smaller pieces of fabric is filling up. (Still need to finish wrapping up the blue box of fabric I was supposed to be working on..) 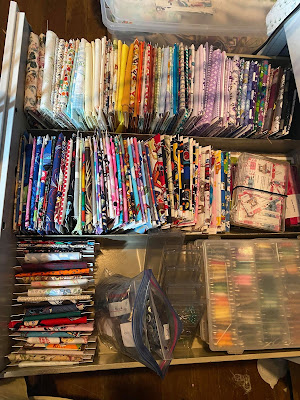 People are starting to ask for some masks again and I'm like ugh ok in a bit lol. Tired of making them but it's a good income source at the same time.

Looks like the kids might not be going back to actual school in August. Still waiting for Trevor's school to say for sure. I just want this school year to be over for him and then we don't have to worry about school ANYMORE! Won't that be nice. Anything after this year is on him.

I love zucchini and that sandwich looked good!
Yes, I'm chatting with customers - oh dear! I hear what you're saying.
I'm 'hoping to make zucchini bread this weekend with my GF flour. Fingers crossed it turns out.
Have a great weekend.