Good morning! Slightly freaking out this morning. I tried out this filter thing on Tik Tok that shows up "energy" that people say you can see ghosts with. I didn't have the camera on because I didn't know what I was doing but we definitely have a child ghost that was hanging out in the kitchen this morning. When they saw me see them they headed for the hallway and then were gone.  Craziest shit ever. Going to have to try it some more with the camera on later but I totally have chills.

In other news, yesterday was Scott's mom's 91st birthday! Scott said we were just going to do cake and ice cream because she is so picky. So we're over there and it is like 8:00pm and she's like "so are we going to eat some food or not?" She apparently forgot what he told her and was just so used to us bringing a birthday meal. She decided that she wanted a cheeseburger so we went to McDonald's and got her dinner. Would have been nice to get her something more fancy but she was happy with it. 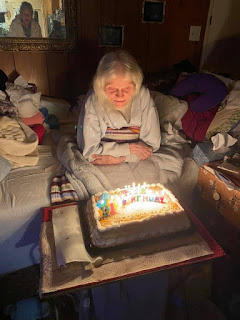 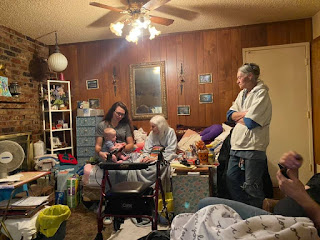 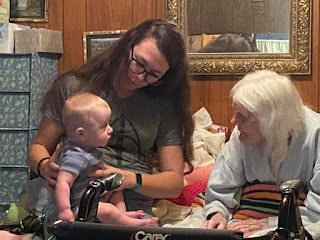 baby getting his height marked on the wall haha 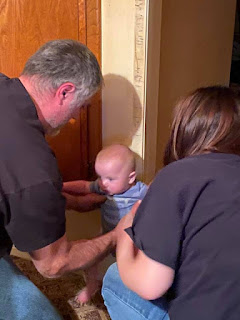 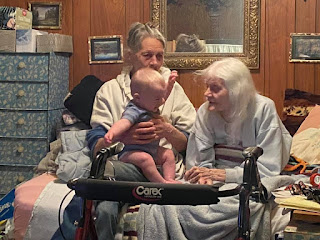 Last weekend Scott took her to get a new cell phone and they only have smart phones now. Oye. Five bucks says she never answers it. Melissa's boyfriend set it up for her to make it simpler (it's an android and we all have I phones but him) and then Jess showed her how it works and we practiced her answering the phone. You know first she'll have to find it when it rings then she'll have to remember how to push her finger on it correctly to open the screen up. Sounds easy but it's not! 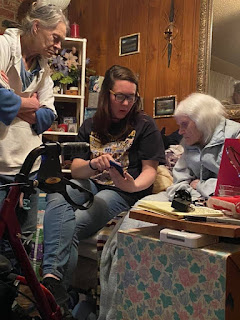 She won't ever answer the house phone and her old phone that had a message machine on it died. We used to be able to talk to her through that and be like "hey we're coming over". But now she wasn't answering any phones and his sister doesn't answer it either. (Thanks telemarketers!). Hopefully she'll get this one figured out. I asked Scott if it had a return time and he said 16 days. Might have to get her a flip phone off eBay or something.
I just got an email that Trevor is going to go to school hybrid schedule starting on Monday. Yeah just in time for Easter break lol. He will be happy though, he's been wanting to go back. The county where I work changed to a better color tier now but I think we still won't go back for at least 30 days. We've been getting emails that they will still want us to telework more once things do open up. The difference between when Trump and Biden began. One took all teleworking away and the other says hey stay home.
I sold a bunch of stuff on the Facebook group. I have a bunch of notifications to go through from last night to this morning to put together more stuff! I might have got rid of all my books and misc patterns I had laying around. Next I think I'm going to go through the patterns I have left in my cabinet that are on Etsy and list those. Once I get rid of all that stuff maybe I'll do some fabric. We shall see!
Pin It
Posted by Julie H at 8:32 AM

91 and stil eating cheeseburgers -ya gotta love that.
I will be curious to see if she answers her new phone. :-)