So since we were all bummed yesterday we went over to the animal shelter to see the ONE German Shepard Puppy they have there. It was the first time I've ever been there. It's REALLY small, but nice and clean and they were pretty friendly in the office. After we checked in we went to go check out the dogs and puppies. You start off in the cat room, which of course most of them are like PICK ME PICK ME!!! They also had a rabbit and some finches, which is kind of funny since that is my step mom loves and raises. I need to call her and tell her they were there!

So then it was onto the dogs and puppies. Here is the one that we went to look at.  She's 3 months old? or so I think. Super cute!  Love the big floppy ears. She's obviously some kind of mix. She's not available until Thursday at noon. Who ever shows up gets her and if more than one person they draw a name out of a hat and that person gets here. Wish you could just put your name on a list! Trying to decide if I should take the day off work to go? 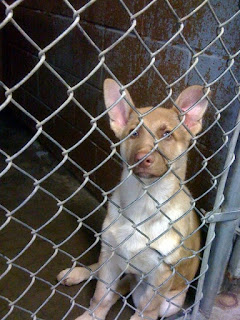 Trevor was in love with this puppy. It's a Pitt Bull though and I can't get past the "bad rap" even though I know it would probably be fine. Super super cute and pretty little. 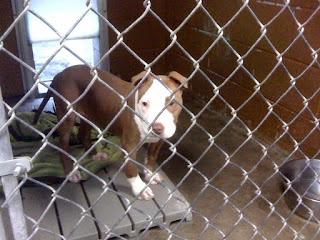 This one is about a year and a half old, if I wasn't so set on a puppy I'd settle for him, he was pretty cute!! 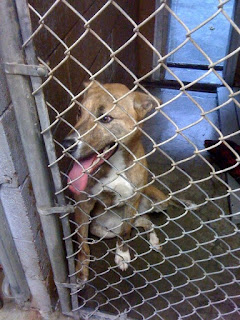 Look at these cute little ones!!  If I was in the market for a small dog! The white one was begging for us to take it home. 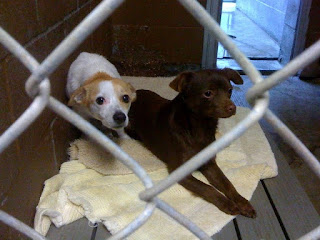 Rottie mix, so so cute. Very playful! It's a "teenager" 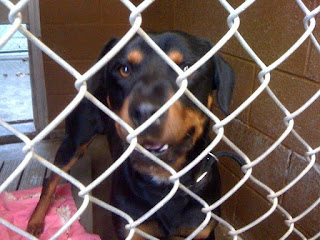 When we got there they had this one in the office taking pictures of it. It was rolling around all playful loving the attention. It's 7 years old so hopefully someone will adopt it. 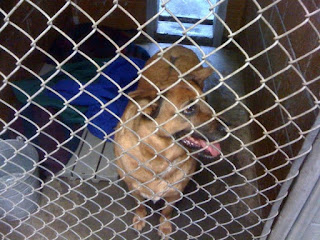 There was a few more but I didn't get pictures of them. I spent a few hours last night looking at Craigslist again. I don't get the whole "flagging" thing that goes on there. People post puppies, people get pissed and flag them, person that got flagged gets mad and comes back and complains. It's all kind of dumb. Maybe they should just make a section for people that breed animals. Even though you should get your animals spayed and neutered (I always do), lets face it some people are always going to breed them or have one jump over the fence before they got their cute little girl in. The whole flagging game just seems silly to me.

I think I'd go w/ the one and half year old. Puppies are succcccch a pain even though they are so cute. And they will chew up everything. I'm sure you know all this LOL.

Rotties and pit bulls may increase your insurance too, depends on the area, I guess. the pit bull is adorable! good luck!

I say don't take the day off, then go after work and whoever is there was meant to be!

Everytime I go, I just want to take them ALL home. Except the pit bulls.