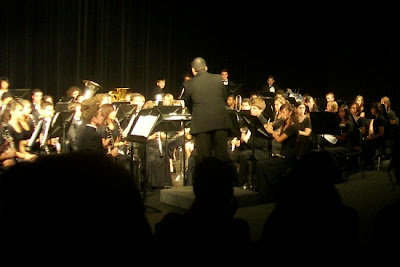 Jessica had her first band concert last night. She is in the "Concert Band". The concert was for the Concert band and the Symphonic band (don't ask me what the difference is). They all played together for all but one song. It was in the school's theater. The theater seems nice when you walk in. Then you sit down, and realize there is NO AIR CONDITIONING. This would be ok if we lived somewhere where it's cold but it's been in the high 90's/low 100's for weeks now. So Thank God they only played 5 songs and the teacher didn't talk too much. The first song went really well and it was a bit down hill after that but overall they did really well.

(she's the last head you can see on the very very far right!Pin It
Posted by Julie H at 4:29 PM