Saturday I got up and went out and ran my mile to keep up my run streak. I went half a mile down the road and then turned around and came back. 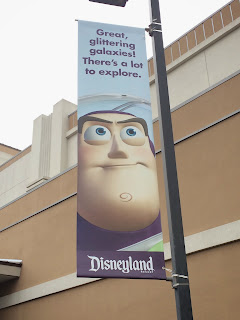 This was a flag on the front of our hotel 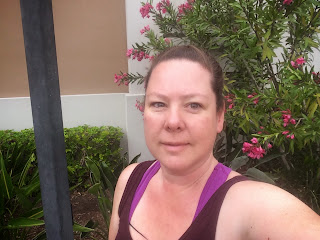 While I was out running I saw a bunch of people walking. They had all done the 10K run that morning. It kind of made me wish I had signed up to do that too. Just a little though lol. Friday they had a 5k, then Saturday the 10k and then finally Sunday the ½ marathon. If you did all 3 you got another medal. You’d also have a very empty wallet because those races are NOT cheap. 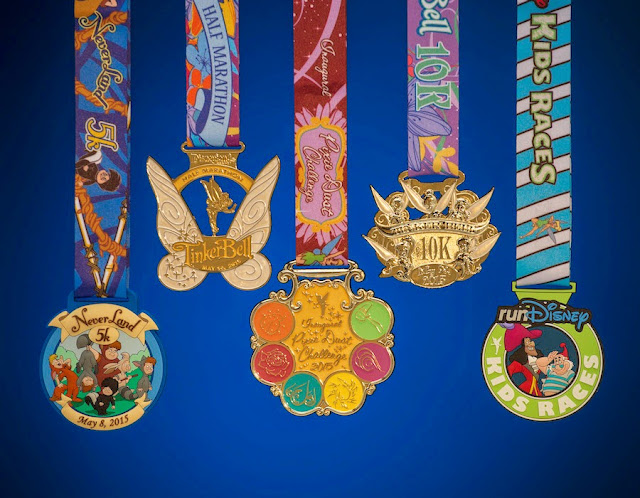 all the medals you could get over the weekend

After my run I showered and then we went out to have breakfast. Somehow we ended up walking to the packet pick up on the way to breakfast though so we did that first. I told Sarah and Juli we should just go eat and then come back for the expo part, which we did. I’m so glad we did it that way because I forgot that Sarah is a SHOPPER!
For breakfast we ate at Downtown Disney again (pretty much all weekend). We ended up at Jazz Kitchen Express. I got a breakfast burrito. It was pretty much delicious and I’m not sure that was all just because I was starving.  Juli got us some beneighs to try. Except for getting powdered sugar all over myself they were fantastic! But then when is fried dough not fantastic? 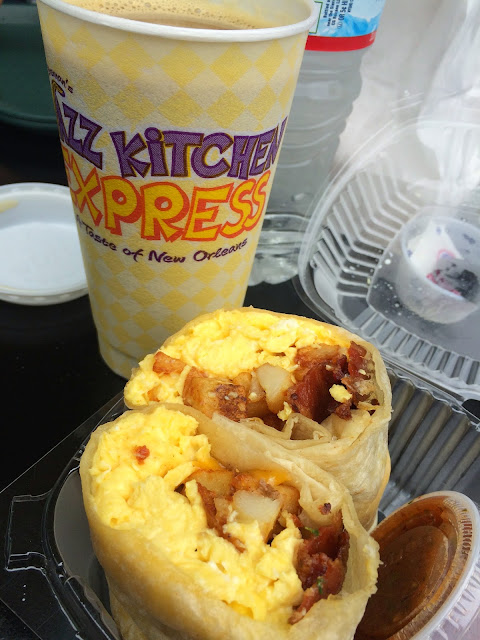 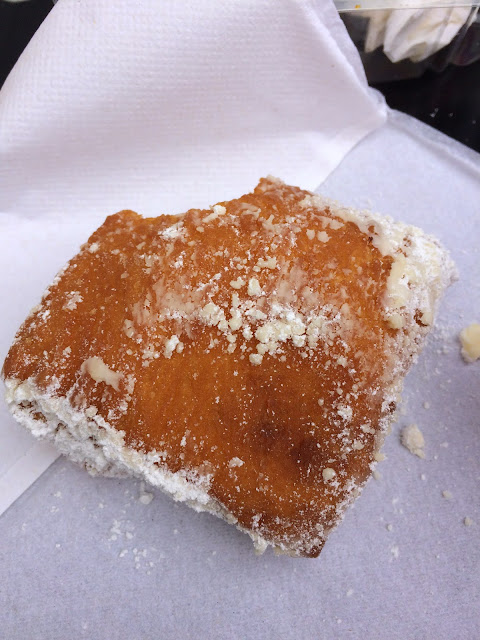 There is an AMC movie theater in Downtown Disney now and they were setting up for the “world premiere” of the movie Tomorrowland. They were building all this elaborate things for people to walk through. We thought, oh that’s cool! And took a few pictures. 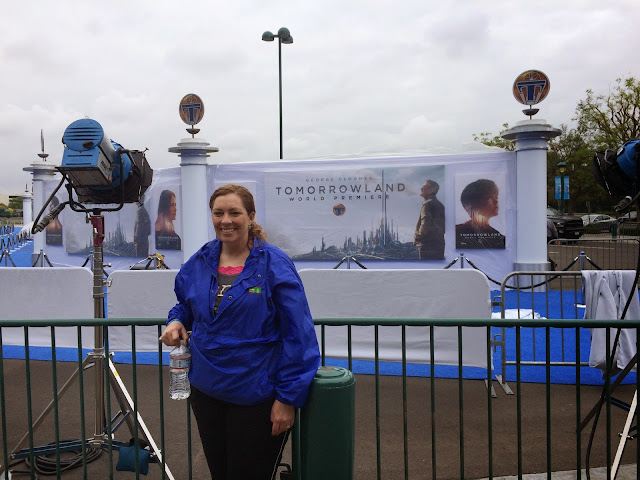 Sarah with her expensive water


We walked down to Starbucks so Sarah could get the “Disneyland” Starbucks mug (which she found out you can only buy IN the park) and then back to the Expo where we spent HOURS. Remember the night before I said I walked through and bought a $4 sticker? That probably took me about half an hour tops. I think we spent almost all day there Saturday lol. At one point I was sitting on the floor taking a break and sent Scott at text that Sarah shops like my mom haha.


At one point I wandered over to this one booth where a guy was selling these roller sticks. He looked at me and said “you have a tight IT band” and started rolling the stick on the upper right leg. It hurt so good!  It also immediately made my hip feel better. How weird was that? So there went $35. My big purchase of the whole weekend. Totally worth it and now my hip felt great! I never would have guess that that was an IT band issue. I also ended up buying a few more stickers for my car (which 2 weeks later I still need to put them on). 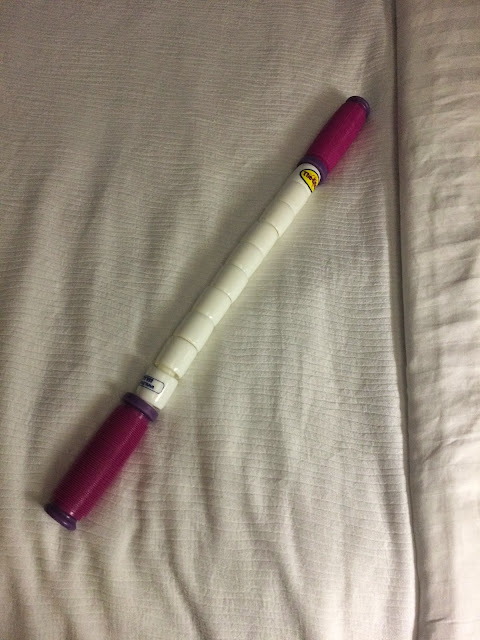 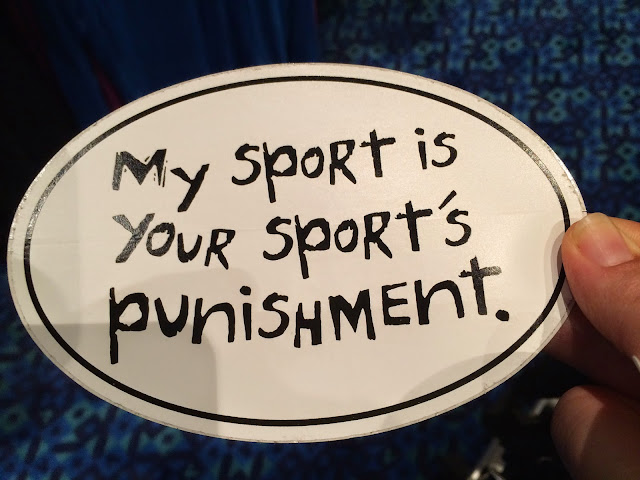 Had to buy this

They had some speakers at the Expo. I thought it was funny listening to one that was saying the opposite of what a lot of other people think regarding nutrition and running. I really think that all that is just up to the individual person and what you find works the best for you. The whole eat this before and eat this after and eat this during. It’s all trial and error.


We actually went down and sat in the audience to listen to a girl that won the Biggest Loser a few years ago. I quite watching The Biggest Loser years ago because all the whining and crying really annoyed me. Plus I used to eat ice cream while I watched it. Raise your hand if you’ve ever done that.. 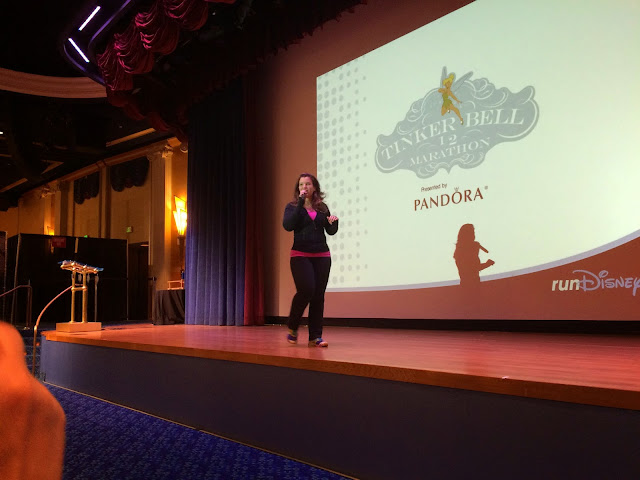 
So this gal, her name was Danni Allen and I think she said she won the 2014 year. She went to the auditions with her friend that really wanted to be on the show, and to her surprised they picked her to be a contestant.
She talked about her eating and things that led her to being heavy, the show, and life after the show. She was really cool to hear and I even got to ask her a question. I asked her if she monitors her calories or just focuses on clean eating or what? She said that she does count calories and then went into how she quit drinking Diet Coke and why. Noooo not the Diet Coke!! (Currently I’m back to drinking it but I do try to quit every now and then).

After her the lady that was the model for Tinkerbell (Margaret Kerry) in the movie was there. She was quite a kick and told us about all the stuff she had done. She was in several movies and TV shows. When she was done we finally left the Expo. 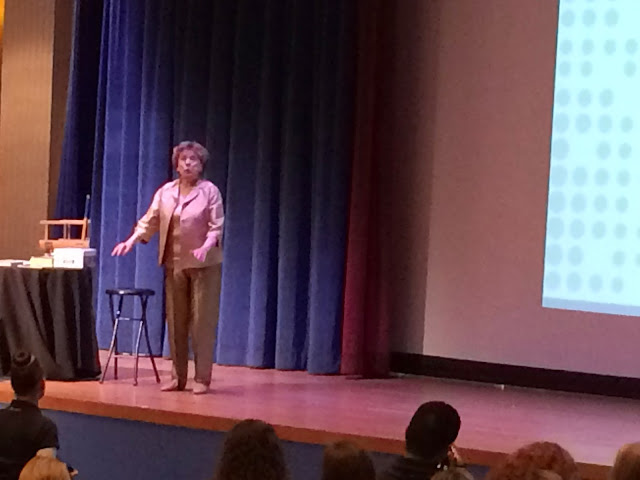 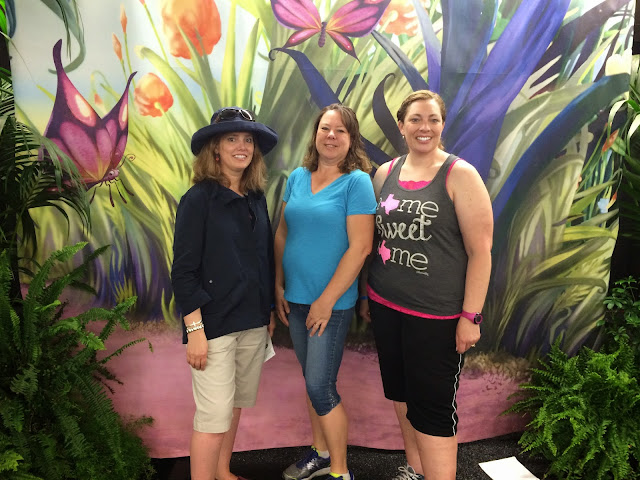 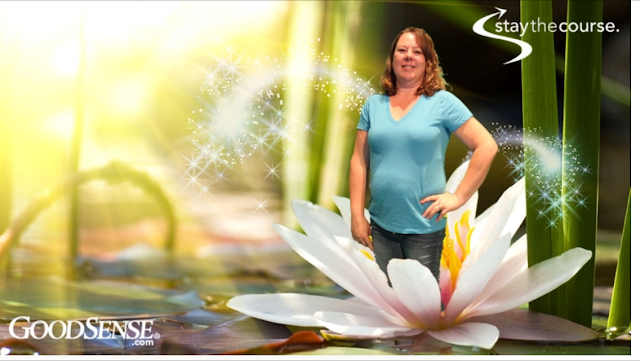 We walked down to the valet area in front of the Disneyland Hotel and caught a cab over to another hotel on the hotel strip for Sarah to pick up a Disneyland park ticket that she had bought from someone. While we were there Juli realized that she had lost her cell phone somewhere.


She remembered some guy bumping into her twice while we were watching the Tinkerbell speaker and wondered if someone had picked her pocket and stole it. OR maybe she lost It in the cab? Sarah called the valet service and they called the cab driver. (There was a little area where all the cab drivers parked and hung out). The cab driver called Sarah and was totally confused and ended up hanging up. Sarah called him back and he told her she had the wrong number. All this time we are calling Juli’s phone and then we started just walking back to the Downtown Disney area. Juli called her husband to tell him what happened. When we were walking back and trying to decide what to do I said let’s just walk back to the Expo and ask around if anyone found a phone. We had to walk back past the valet area. Sarah stopped to talk to the valet desk people and Juli and I were going to go to the Expo area when I noticed the same cab driver that had drove us sitting right there! I pointed him out to Juli and we walked over and asked him if we could look for the phone. And wouldn’t you know it? It was right there in the back seat? Talk about luck! I don’t know how the guy did not hear the phone ringing over and over. Of course by the time we found it Juli’s husband had put a hold on it so we had to wait for that to reset for her to use it but man oh man. That was one happy outcome!


So after all that drama we were all ready for some dinner! We started walking down Downtown Disney and saw that people were lining up waiting for the stars to show up for the premier of Tomorrowland.


We decided hey, might as well hang out! It was only going to be a little while until people showed up, when else in our lifetime are we going to see famous people arrive for a movie premier and walk down a carpet?


We all ended up a little separated but in the same general area. Eventually people started walking down the aisle. Most of them I didn’t know but I took pictures of anyways because it was fun!


There was a girl between me and Sarah that kept getting stars to stop and take selfies with her. How fun is that? There was a ton of Disney channel kids stars, which, if it was a few years ago I would know them all but not anymore. I did catch a glimpse of Ashley Tisdale though! Also Emily Osment from Hannah Montana was there.


Faith Hill did a little dance as she walked by and I didn't see him but her husband Tim was with her too!


Eventually the grand finale of George Clooney happened. My phone was JUST about to die any second. Of course, as soon as the big star shows up it’s going to die! I did a little video when I heard him coming and then a couple of pictures and then poof my phone was dead.  At least I got a couple pictures of him!  His wife had come probably an hour before him (talk about a tall thin rail of a woman!) which I thought was odd but then when he came he was so nice and stopped to sign autographs and take pictures with people. I was like no wonder she came earlier! 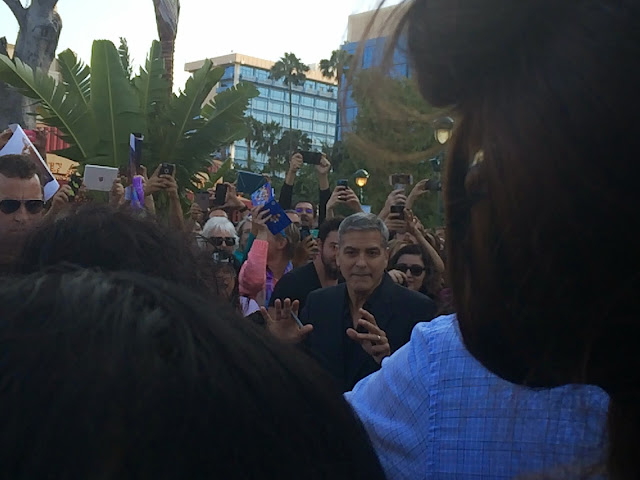 Overall I was amazed at how nice most of the stars were, stopping to take pictures with fans and sign autographs. After all that craziness broke up we finally wandered off to find some food. We ended up at the same place I ate the night before because the line wasn’t very long (the Rainforest Café had a 2 hour wait!) and hello, margaritas. 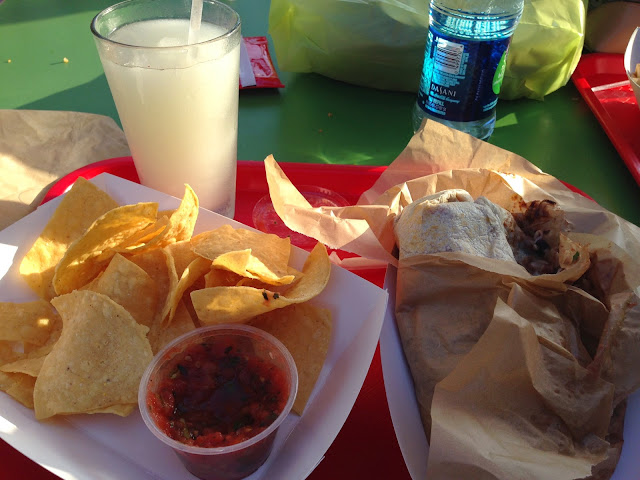 While we were sitting there eating there was a bunch of kids in prom attire walking through to go to dinner. This cute little couple ended up coming to where we were eating.  All the tables were pretty full so Juli went over and told them we’d save them our table for when they were done going through the line. That’s a bunch of mom’s for you right? 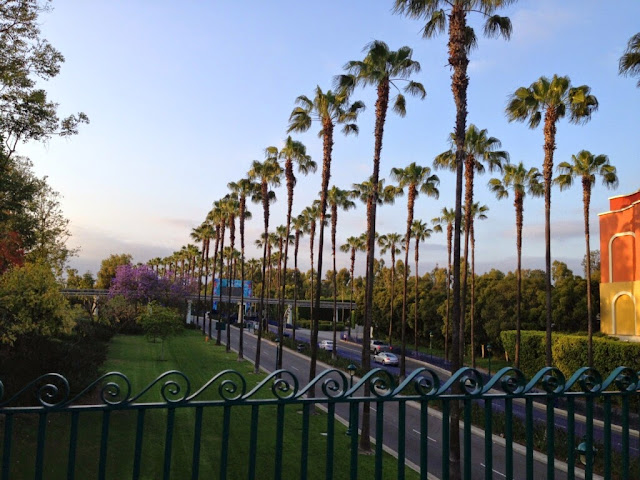 View of the start line for the Tinkerbell Half

After that exciting day we finally went back to the hotel to relax and get ready for the big race day. The race started at 5:30 AM so we needed to get up bright and early!
I posted about the race already, you can go here to read it.
Pin It
Posted by Julie H at 5:00 AM

What a great little trip,punishment and George Clooney!!!
i'd run for George. :-)