So this big mess? 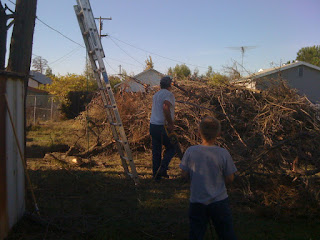 It's pretty much gone! Sunday we took a 2nd load to the dumps and SOMEHOW Scott got almost that whole mess in two loads. Freaking crazy!! He'd load some up and then jump and stomp on it to make it break down a bit. We put a little bit in the trash can and now we just have a small amount left that I'll put into our trashcan. (it's not much, don't worry!) Nothing like not wanting to spend money to motivate my man hahaha. After the dumps trip we came home and he worked on cutting up the big branches. We loaded them up into the back of the truck. He was too tired to deliver and stack them to my  mom.

His leg was STILL hurting him from when he whacked it back on Oct 14th so 3 weeks later! He was really limping around.  I went and got him some ice and some beer to help numb the pain.

Monday he came home from work early with a huge knot on top of his knee and it was really swollen. I made him a dr's appointment for Tuesday morning. He finally went and he was told the tissue is infected (given an antibiodic) and his blood pressure is really high so now he's on blood pressure meds. I'm hoping this helps his leg and his "short temper". I think now we need to work on not needing any blood pressure meds.Pin It
Posted by Julie H at 6:00 AM

Hi there! I'm stopping by from SITS roll call and wanted to say a quick hello and give you some comment love!

I'm glad Scott is okay and that he got some meds to help his knee.

Hope you're having a great day!

Poor guy, his leg must have been sore!
Well done on them getting that huge pile to the dump.