Saturday morning we got up early but not too early for the Almond Blossom 8k. One good thing about running local races is that you don't have to get up before dawn to get there on time. Although we still seem to not have perfected the perfect time window to show up. Either we are super early and waiting around forever or almost late (or that one time too late).

So we got up and had enough time for coffee and peanut butter toast and then drove over to Ripon which is just down the road a bit and got signed in. Then we waited and waited and waited. They had a one mile race so we watched that. So cute to see LITTLE kids running a mile. I'm talking like probably three or four years old. AMAZING! Hindsight and all that, wish I would have been into running before my kids learned that running was hard in school.

Finally it was our turn to start. The course started in a residential area in front of a park. All lined up! 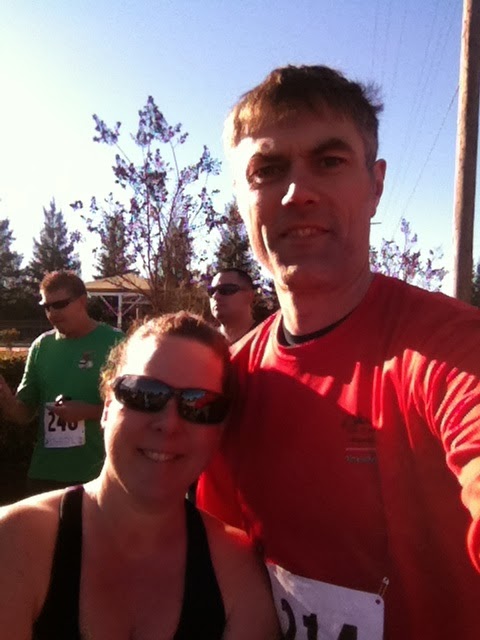 My plan was to try and not walk. I made it to the half way point where the water station was and did stop and walk through there to take a couple sips of water and then I ran the rest of the way. I was breathing like an asthmatic smoker by the time I was done with the race but I made it! I had to spring in the finish because some girl was right on my heels and there was no way I was going to let her pass me haha.

I'm sure my finish line picture looks FAB aka like death.

After I came in I wandered around trying to find the water. I swear I don't understand why they don't just set up the water RIGHT at the end of the finish line. No you have to wander all around trying to find it. I finally did and then grabbed a couple Cuties and sat on the curb for a few minutes to collect myself. 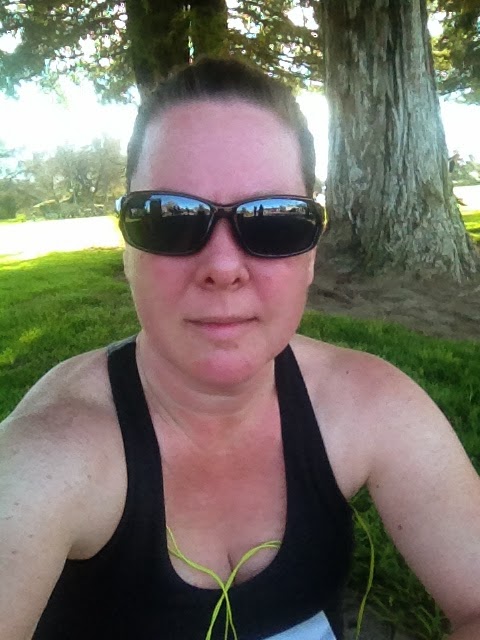 Then I went off to wait for Scott to come in. So proud of him doing these things I drag him to with me. He's hardly run at all lately but he went with me anyways and walk/ran the 8k.

While I was waiting for him I was sitting on the curb and started talking to the girl holding the little flag for the runners. She was a larger gal, someone who you would not look at and think "she's a runner". She told me that she didn't run that day because she had a higher mileage planned for her training run for the day. She is training for a half in San Francisco (hello death by hills) and has run 3 marathons. Just goes to show you should never judge a book by it's cover and you never know what journey someone else is on.

Before I knew it Scott was coming down the street! Looks like he has a police escort haha. 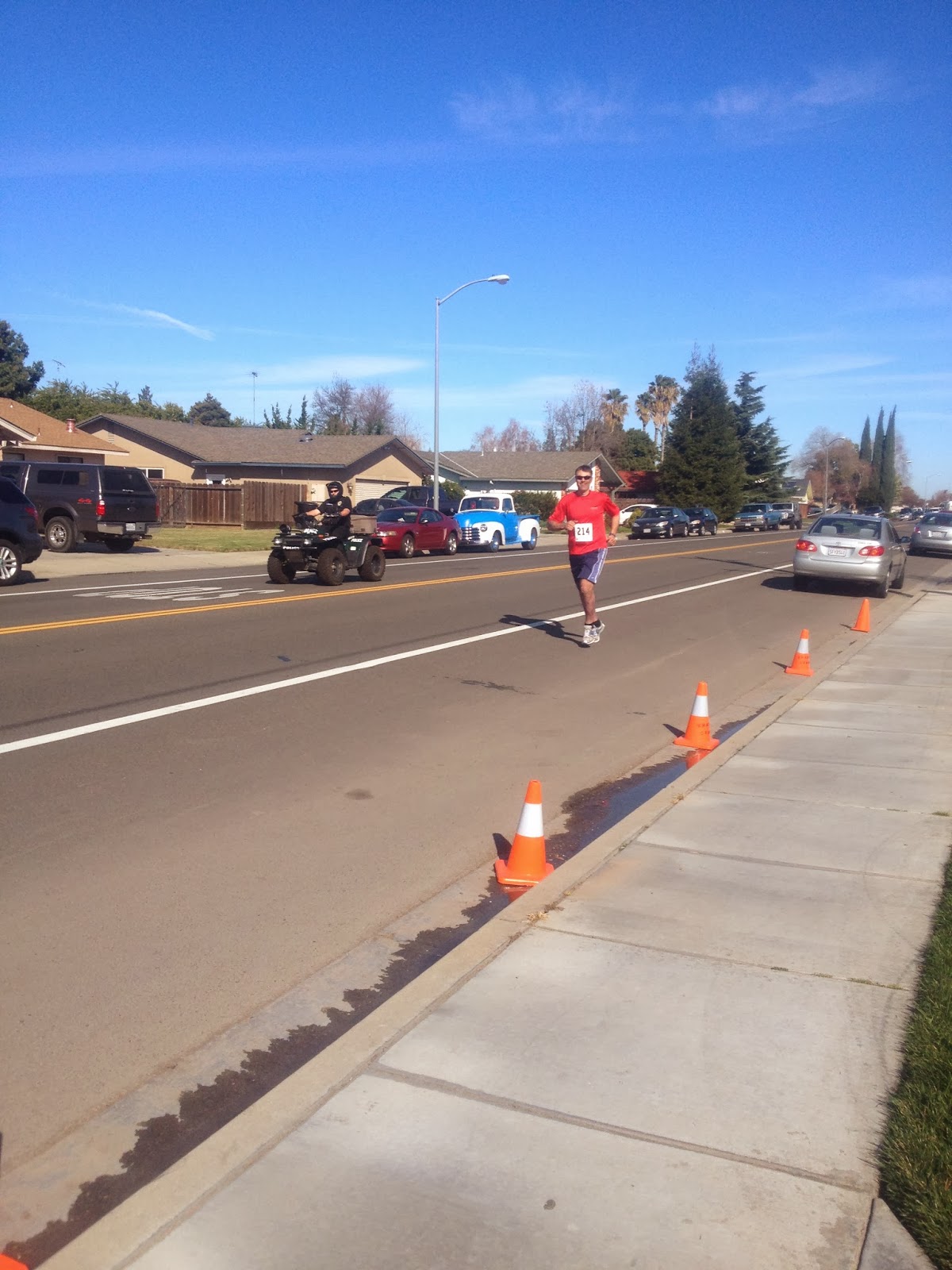 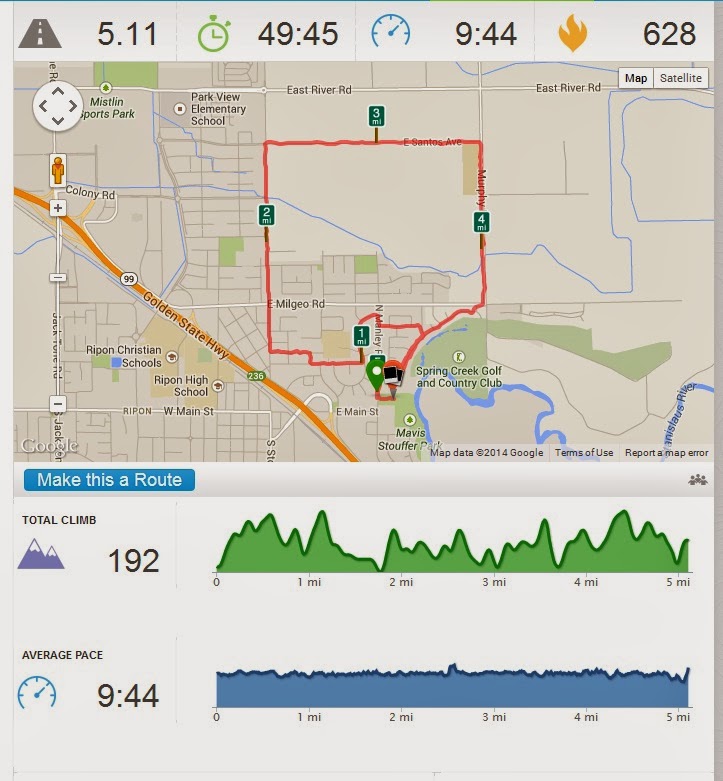 I'm surprised it looks like it had little hills since the whole thing seemed flat as a pancake. It was pretty hot on that last 2 long sections. One was a road with almond orchards on both sides and the sun was beating down and the last one  we were running into the sun. It was pretty hot for February.

My splits look pretty good! I stayed pretty even throughout the whole race. The 3mi one has the water stop in there where I walked about ten paces or so. 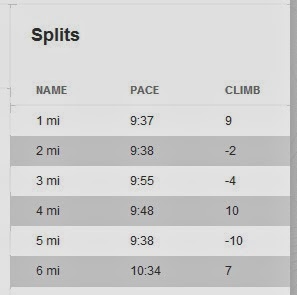 Overall it was a really good race for me and my first 8k so now I can say I've done that distance!