This morning we set out to go run the Ugly Sweater Dash!

We donned our ugly sweater attire and had Trevor snap a picture of us. 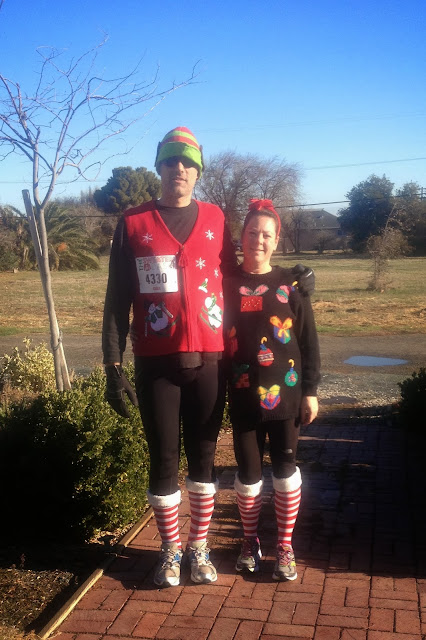 We were running a little bit behind, but it I was driving so we were sure to make it there in time. AND THEN the traffic STOPPED. Like dead stop.

It's ok we still have half an hour I said. FORTY MINUTES LATER we finally passed the accident. Ugh what to do?

With a hopeful heart and an almost empty gas tank I decided we would just drive over there and MAYBE it started late. When we were driving in there was already some people driving out. Not a good sign! BUT I could still see some runners and walkers.

We walked over to where people were running and I asked a security guard if she knew where the race had started? She said that it was "over there" and this was the finish. So we walked in the finish (and I got a cool Ugly Sweater Ornament) and then debated on what to do.

I told Scott what the hell, let's just go do it! So we found the starting line and did a little run/walk (he can't run very much still) and there are all these cones all over the grassy area and they are guys in a golf cart picking them up. Um ok so that's not going to work. There was a guy at the end of the road part and he said we could go to the right and it would take a bit off the course but since the "go to the left" was disappearing as we were watching we decided the right way was the way to go.

There was more random cones all over another grass area, but it looked really confusing so we just stayed on the road part and ended up with a bunch of walkers. We ran/walked along with everyone else on the path and finished the run in 1.6 miles.

Hey it was half a 5k! Better that than nothing I guess haha. Scott got his sweater ornament (he didn't want to get it if he didn't finish) and we went over to get our cider which was apple juice poured in a little mason jar. Hey what the hell, more swag!

We took a couple pictures 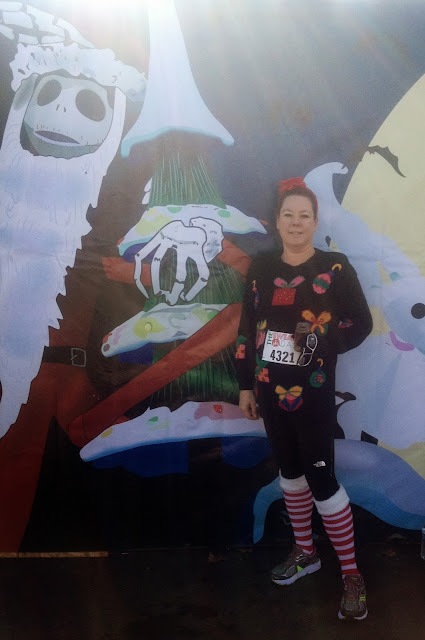 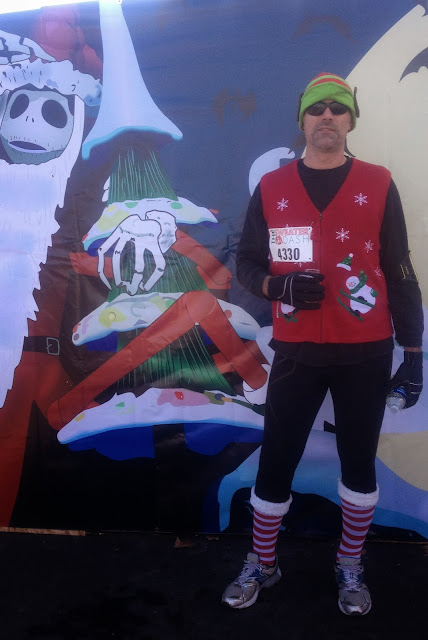 and then got some gas and hit the road.

We took the back way home (I was so done with the freeway) and stopped at a Starbucks for some coffee and a bagel.

I told Scott I don't think that really qualified as a race for the month so I think I might do the Double Road Race in a couple weeks. That my friends, is a big freaking challenge. I did it last year, in the rain, and it was hard but I felt very accomplished when I finished it. Maybe I could beat my times?
Pin It
Posted by Julie H at 5:34 PM

You are both rockin' those sweaters and those Santa socks big time, love them! So glad you enjoyed the biscuits. :) No, no instagram ATM. We don't even own a cell phone, can you believe it? One day soon though!