Work was so busy today. I said outloud that I'm ready for a few of those "boring" days again. The only time I wasn't actively working today was when I was at lunch or the bathroom.  I probably would have just held it a bit but now that I'm "older" sneezing with a (slightly) full bladder is a bad idea.  I find this really annoying. Also annoying is how much better I can see to thread a needle if I put on reading glasses (with my distant glasses or contacts on also).  And that two inch long gray hair that likes to stick straight out of my forehead. Like where did you come from?

So in other news. Last week I had to take Buster to the vet. His eye had turned all white and while I was like "oh he's just went blind" the kids and my husband were texting me and telling me how he needed to go to the vet. Eventually I looked at my 14 year old cat who loves me and sleeps on my pillow every night and decided I guess he was worth a small fortune vet visit.  Even if his nickname is "Mr. Pisser" and I look forward to the day I can actually put rugs down in my bathroom. 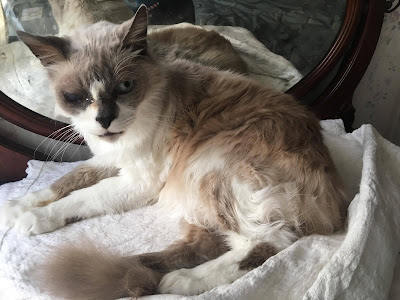 He weighs 13.2 pounds now. And yes, he needed to have his eye removed. I signed away an entire paycheck and picked up my cat the next day minus one eye.  Doesn't he look like he was in a bar fight? 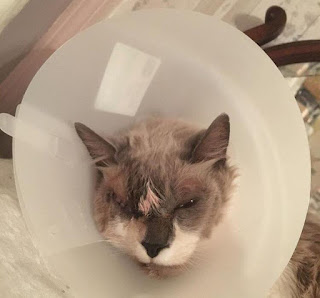 The next day after work I took off the cone and he perked up so much. He hasn't done anything that would hurt his stitches so he's remained cone free.  Here he is last night coming in for his nightly "I'm a better door than a window" while I tried to watch Netflix on my Kindle. (Currently watching The Crown and will go back to Lovesick when I'm done with it) 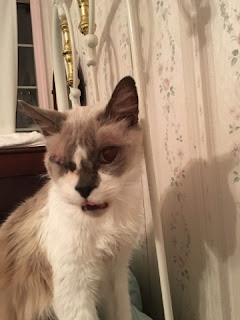 He has one more week and then he'll get his stitches out. I miss his pretty eye but I'm glad he didn't have a tumor. They said his eye had an ulcer, although I wonder what caused it. I went to a new vet and while I love that they didn't charge extra for a night appointment they were a bit lacking in the follow up phone calls. The vet I was going to built a new "Vet Mansion" for their new office so I doubt I can afford to go back there haha. They were pretty pricey to start with. I was quoted $200-$1000 when I asked how much they charged to spay back when I needed to take Lucy in. Uh yeah no..

Well off to hide in my bedroom. I have offered to pay Scott how much he would win for Fantasy Football if he would just shut the hell up and stop yelling at the TV but he doesn't appear to be taking me up on that offer. I should be sewing so I should probably start the bag for my co-worker but I'm kind of tired. Might just be a Netflix night!

Oh you're poor Mr. Pisser. They can't just remove the ulcer but they had to take the whole eye? wow that seems so drastic. Poor thing.
This is when I love pet insurance.

As for that wondering gray hair that appears out of nowhere - you figure out where the hell that came from and let me know. I have one under my chin area. I use a 10x mirror and see it and pluck it. I look every morning - not there - not there - then BAM it's there and so long I could put friggin' beads in it. WTH? How does that happen? Ah, life is fun when we age isn't it...just don't sneeze. :-)