I thought for sure I'd had dodged the sick bullet. hahahaha. Ugh. Currently sitting here with tissue shoved into my right nostril because that's easier than wiping it every few seconds.

Today I actually got to work on time. Woohooo! They totally came out and filled all those nasty pot holes. Hey maybe I should call the county more often instead of just trying to avoid them.

I went to the thrift store on my lunch and got a nice fat pack of fabric scraps for $4 plus some other pieces they had rolled up. Also a vintage Peter Pan sheet that will make a really cute bag or something. Hmmm. Of course that has to hit the washer and dryer before I can bring it in and play with it.

At work we had a baby shower for the boss in the other department. It was really nice. The gal that put it on made it a surprise which had her freaking out for like 2 weeks all worried about the logistics. I just do not work that way. Why go through all that bother, just tell her you're having a baby shower for her. We have parties for everyone so it wouldn't be that big of a deal. Save some stress!

Anyhow, look at this cute banner that she made. 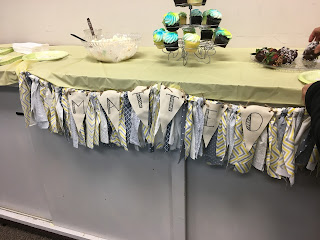 After work I went and met the car guy that had commissioned me to make some stuff for him. I was so glad to get done with his stuff last night. I was totally stressing on it all. I was thinking he was going to be uptight about stuff but he was so laid back and chill. Nice! So got that stuff off my plate.

He had this idea for making phone cases but I told him I'd rather not make anymore. He was ok with that and paid me for what I had made. He is in a Corvair car club so he had this fabric that he stamped. I found the printed fabric online, it was a bit expensive but it's really nice if you are a Corvair car guy! 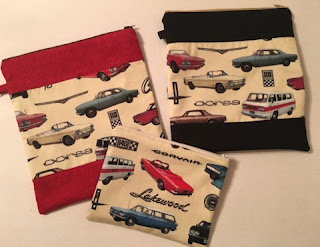 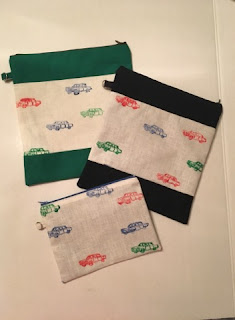 So now that that is done. On the way home I was driving past a thrift store and found two nice vintage sheets. One is a print I already have and use for a table cover a lot so I think I can combine the two to make a nicer real tablecloth or two. The other is a cute print.

When I got home I ran inside and took a cold pill real quick and took the dogs out. Doesn't matter who is home and how recently they went out, they think they have to pee when I get home.

Then I went down to bingo where I won THREE games on one card. I won a whole $8 lol. Living it large in the river club.

I need to start working on cleaning up for Easter. Of course it's going to rain up until a couple days before Easter (so far). I'm going to try and get a bouncy house for the kids to play in. My friend's daughter rented one for $100 and all the littles are just the right age to really enjoy it.

I'll probably be home sick tomorrow if I still feel the same as I do right now. Don't want to be snotting and sneezing all over everyone.