Wednesday the kids and I made tons of cookies

Spritz
AND Peanut Butter Pie. By the tiime we were on the last batch I had pretty much turned it over to the kids. It's nice when the oldest is interested in helping out AND capable of taking over.
Thursday I took my mother in law to Costco. I was petrified the whole time that someone was going to ram in to her with a cart and break her. We made it out in one piece!
Later that night the next door neighbors came over with gifts. We all enjoyed some Pumpkin Pie (from Costco, it's the bomb) and coffee. 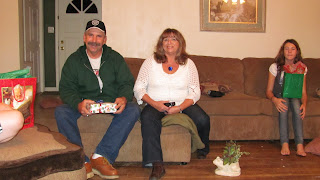 Christmas Eve we all just kicked it around the house for most of the day. We watched three Christmas movies

I fell asleep before Elf was over. I should have known better to lay down on the couch! Eventually it was time to get ready and go to Scott's Mom's house. She had cold cuts and finger foods. They got the kids some stuff for their stockings and cash. Here's the stuff we took to his mom's!

Those are lil' smokies wrapped in bacon and then covered with brown sugar there on the left. I cooked them a little too long though. Everyone else still liked them but they were better last time. 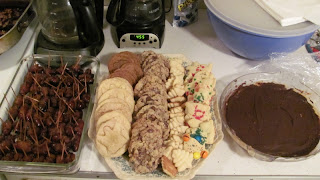 My sister in law got them drawing pads and pencils from the dollar store. My mother in law gave them some Avon stuff in their stockings and ca$h, no one ever turns that down! 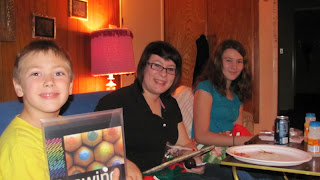 My mother in law liked her sweater I bought her. It has a really large turtleneck. She said it will double has a head cover lol. 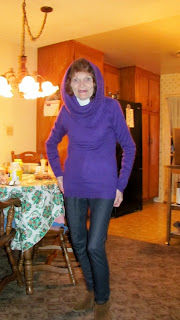 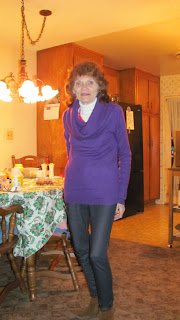 She wore it the rest of the night. Score for a gift that she actually liked. I got my father in law a Hickory Farms gift set. I didn't get yelled at too much for buying presents even though I wasn't supposed to. Everyone likes to have something to open I think. How sad would it be to get nothing at all?
Trevor with his Grandpa 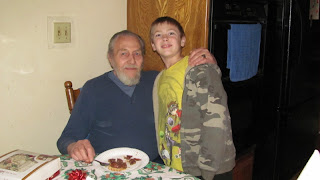 We ended up staying until eleven thirty which is really unheard of for staying at his parents. Usually we're in and out in two hours or so. It was nice since his sister that usually stays in her room the whole time stayed out THE WHOLE TIME, his brother was there for quite awhile and his other sister arrived awhile before we left (along with her son who drove her there but he only stayed for a bit).
I crashed out when we got home. I was starting to feel like I was getting sick (of course, I can't have a Christmas without being sick, can I?) Scott played Santa. This was a good year for him to do it since there was only one thing to put under the tree and a few things for the stockings. 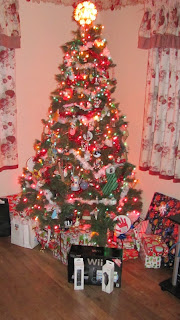 I took this picture in the morning (I usually take a picture of the gifts under the tree before I go to bed). There was no need to hurry and get up this year. Everyone slept until almost 9:00! I can't believe everyone slept in so long!

Once everyone got up it was straight to opening presents. In our family it's tradition for each person to open their presents one at a time starting with the youngest. Before opening you have to take a picture with your "pile". 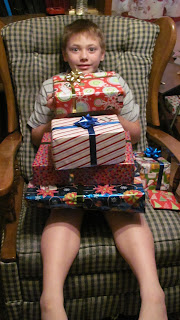 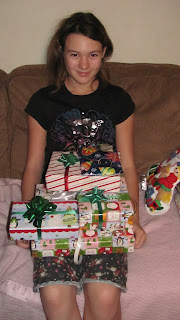 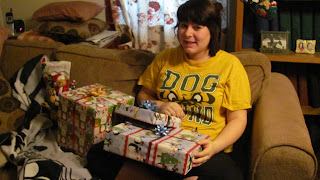 The kids didn't seem to notice (or at least they didn't say anything) that they didn't get quite as many gifts or big ticket items. Other than the Wii that is. Which was nice. Rusty was rather confused about the whole situation. He kept running back to me over and over. 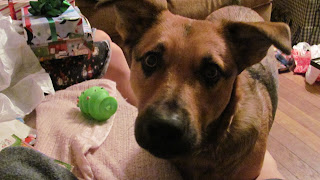 Every year I say "I should get myself together for Christmas morning". Never happends (and I even had time this year) At least I had put on my Christmas nightgown, which I wear all year long lol. 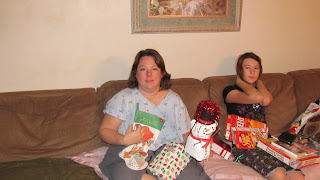 Scott got those "awesome" fleece pants from the neighbors. He has been warned that if the "awesome pants" are worn outside of the house they will be some "awesome garbage". 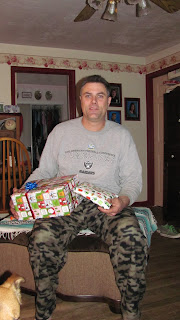 The kids hooked up the Wii after we opened presents. We got Melissa Just Dance 2. Rusty was not happy about everyone jumping around! 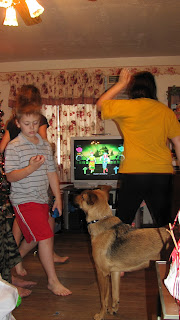 Eventually I got everyone to FINALLY get ready to go to my mom's house. They had all been playing around while I cleaned up everything (didn't want the dog eating anything while we were gone). Jess remembered at the last minute that she forgot to put the pictures in the picture frame she bought for my mom. Which meant that she turned into holy terror drama monster while she tried to put it together.
Eventually everyone was in the car and on our way. Scott pointed out that the person that had took our shed had painted it. I said that I had told him we could paint it years ago, and not that the one he moved in it's place looked any better. He said "can't I do anything right?" Which turned into me wearing headphones the rest of the way to my mom's house.  Which, was majorly detoured because first he got off on the wrong exit? and then when he got off at the right exit he didn't get in the right lane so we had to go a whole different route. We've only been driving there for 18 years... I was good though and didn't make any comments (outloud).
Christmas at my Mom's was all day. We opened presents, did a gift exhange game with the adults, made dinner (I made 2 lasagnas), ate dinner, cleaned up and eventually had dessert and left around 9. Scott's brother was there. The best part of Christmas at my mom's was playing with my niece. 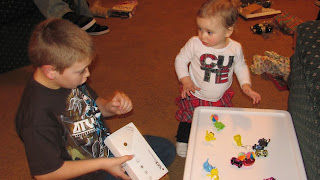 The not so great part was that I was getting sicker as the night was going on. My brother and sil/niece and brother in law left early. My nephew stayed so he could play longer.
My other brother was rough housing with my nephew and Trevor. It's at those times that I realize how incredibly awkward it is to have a son who doesn't know how to wrestle. When we were growing up every night before bed my step dad would get down on the floor and wrestle with my brothers. EVERY night. I don't think I've ever seen Scott wrestle with Trevor. Probably because his contact with his dad while he was growing up was trying to stay out of his drunken path. It makes me really sad that my son doesn't know how to play like that. BUT then I can't really blame my husband because he doesn't really know how to do that either.
Everyone was so tired by the time we were having dessert. We didn't end up playing any fun games. It was really kind of depressing.


We got home and Scott and the girls stayed up forever while I tried to fall asleep with my stuffed up nose. I kept crying to myself, which really annoyed me. But I couldn't help to feel kind of sad that Christmas had kind of sucked. I'm glad it's over for the year!
Pin It
Posted by Julie H at 12:38 PM