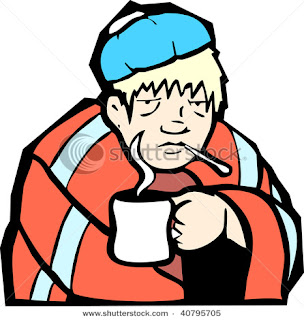 After being sick for the WHOLE month of November I'm finally feeling better. Today? The person sitting one cube over at work is so sick with a cold. OMG I so want to get a bubble and wrap it around myself.

I had to take Jessica to the doctor yesterday because her ears have been hurting her and she has a double ear infection. Poor kid can't catch a break with her ears. She's had two sets of tubes and then later had to have her eardrums patched since the holes from the tubes wouldn't close up. It's been almost year since she's had that done. I had hoped that she would have outgrown the ear infections.

I'm really wondering if she has some kind of food allergy. I've read before that that can cause ear infections and eczema and she has problems with both. If she starts getting ear infections all the time we might have to look into it. She said she'd rather be sick all the time than get another pair of tubes in her ears.Pin It
Posted by Julie H at 9:32 AM

People who are sick should STAY HOME! I had to work beside a woman today who was coughing fit to kill... and I was so tempted to slap her one for coughing all over me! Pffffft.

Ugh, I am hoping you don't catch anything else, that is no fun!